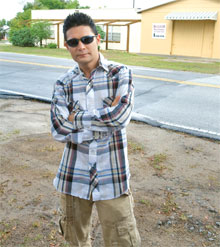 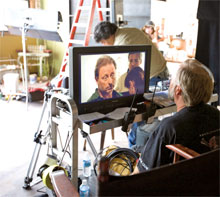 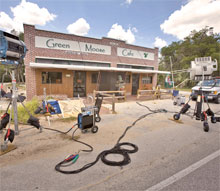 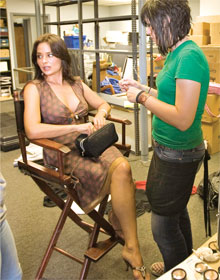 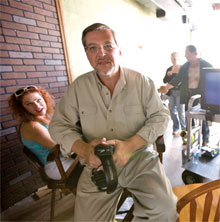 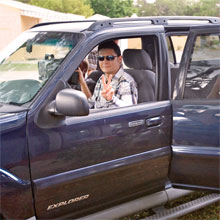 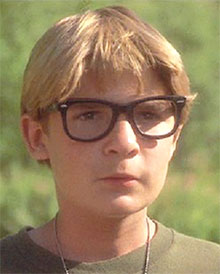 Just picture it — a sweltering 90 degree day in Montverde. Some of the cast and crew are back in the diner re-shooting scenes for the movie, Terror Inside. There’s no air conditioning. And they’re working on the third take.

“It’s hot. We gotta get on to the next shot, so we can turn the air on,” says Flip Minott, the director of photography and co-producer.

Jozef Lenders, the writer/director/co-producer, walks back to his chair after giving instruction to the actors in the scene.

Joe Abby, whose name is also Joe in the film, is the third wheel of the love triangle between lead characters, Maria and Allen, played by Corey Feldman. Joe is trying to win the heart of Maria, who’s played by Tanya Memme. The final act of the scene is a kiss initiated by Joe.

Finally, after the fourth take, it was a cut. And for good measure they ran the scene one last time. Applause rang throughout the set and Joe, who is a part-time actor with a day job as an operations director of a major restaurant chain, walked into the area where the directors and other cast and crew members were seated.

“Is this where I say Corey taught me how to kiss girls?” Joe says of the leading man.

Jozef, a resident of Cape Coral, wrote the script 10 years ago with the setting in Ochopee, a small town between Naples and Miami. The financing was set and all things were a go until the money man came down with cancer. The movie was put on hold.

Jozef’s friend Flip, a resident of Fort Myers, moved back to Florida and together they started Minott Lenders Motion Pictures. Jozef knew all along that he wanted his friend to be the director of photography for the film.

Jozef realized that Ochopee had changed since he first wrote the script. The little motel where some of the scenes were set was no longer a motel but rather a ranger station and other businesses were gone as well.

“We scoured Central Florida,” he says. “We found the perfect setting in Montverde. Some of the buildings were empty or under partial construction, making them available for shooting.”

Town officials approved the use of the name Montverde in the movie, which will feature scenes shot throughout the small town that is located in southeast Lake County near Lake Apopka. The picturesque Montverde Academy was the set for the fictitious university named “North Florida Central University” in the movie.  Other sets included The Green Moose diner and two buildings on Seventh Street (County Road 455) as well as a few private homes.

Jozef says it’s kind of difficult to categorize the movie. Terror Inside is about a well driller, Joe, who gathers geological samples for a university study, he says. While digging, a strange oozing liquid is absorbed into his skin. It slowly transposes his sense of pain and pleasure.

Joe stays on a few days getting to know the waitress, Maria. Her boyfriend, Allen, visits the town frequently, but at times is delayed by work. He finally makes the final decision to quit his job, go to the town, and marry Maria.

He finds that all has changed. The virus has spread.

“I’m lucky,” Jozef says of his idea. “The story has never been done before — pain and pleasure reversed.”

In the film, the younger generation doesn’t want to say anything because they get a euphoric feeling when they stab themselves in the hand, he says. The older residents keep quiet because they don’t want to become outcasts.

“If you were to wake up one morning and stub your toe and it felt good, you wouldn’t proclaim it to the world,” Jozef says. “There’s a lot of creepy stuff in it. It’s more about the transformation they go through.”

Flip didn’t know what to think when his friend and partner mentioned the script.

“When he first told me about the script, I thought, ‘I’m really not into horror,’” Flip says. “But he convinced me that it was more of Hitchcock-type film.”

The pair continued to discuss how to categorize the film.

“Everyone thinks Psycho is bloody,” Flip says. “It’s just really the shower scene.” In this film, “20 some students die, but the audience doesn’t see it. They find out about it from a cop throwing photos down on a desk. It’s not like your typical horror film.”

Plans are for the motion picture to be screened at the 2008 Sundance Film Festival next January.

The film came in at budget, which was $500,000, Jozef says. Because of the low-budget picture, there were no constraints on hiring all Screen Actor Guild actors. Students from the Valencia Community College’s motion-picture production program signed on.

Guild member and Professor Ralph Clemente said 27 students came to work during the six weeks of production. They brought equipment from the school and filled positions from first assistant director — someone who runs the set — to the key grip. The Valencia program agreed upon a 10 percent share of the take.

“It’s a good opportunity for us,” Clemente says about the Valencia students who participated. “What’s important is what we get out of the experience.”

Back on the set, Corey takes a chair next to the directors to give input when needed.

“It’s nice to give back,” he says. “I like to help the guys just coming up in the industry — share experiences and give advice.”

Corey’s last role was in the independent film Cluster, which is a dramatic comedy about sexuality and contemporary teens. He says he’s constantly taking a look at scripts that come in and jumped at the chance to perform in the unique, Terror Inside production.

“It’s a very interesting twist,” he says. “It’s something I hadn’t seen before. It’s inspiring.”

Corey and his wife, Susie, who played Katie in the film, have been busy preparing for the premiere of The Two Coreys, (including fellow former child actor Corey Haim), scheduled to air sometime in July on A&E. He says the show is a cross between Curb Your Enthusiasm and Family Jewels.

The couple was married at the end of the first season of The Surreal Life. They have a 2-year-old son, Zen.

Corey’s onscreen love interest, Tanya, is no stranger to the camera either.

“It’s kind of cool,” she says of having two guys vying for her affection in the movie. “Really, it’s not so bad.”

Tanya hosts Sell This House and Move This House on A&E, and also appears on Canada’s version of Entertainment Tonight. Terror Inside is her first motion picture role. She said she hadn’t met her leading man before, but knew of him through the network.

“I was hoping that we would have enough chemistry between us,” she says. “It went well.”

Tanya’s first CD, Gemini, is slated to come out later this year. She may have another role to play in an upcoming project of Minott Lenders Motion Pictures.

“I just sprung it on her today,” Jozef says as he looked at Tanya. “You didn’t tell anyone about the plot?” he asks her jokingly. Then he lifts his index finger to his lips and says, “Shhh.”

Locals enjoyed the time with cast and crew. Montverde resident Laura Eldridge has a business in town and is the co-owner of one of the buildings used in the film. She plays the part of Dora, who owns an antique shop with her husband, Uell, played by Michael Ray Davis.

Laura says she enjoyed herself on the set and may decide to take up acting as a career in the future. Her real-life husband, Wesley, says he came out to watch her on several occasions.

“We’ll see,” he says of the acting bug that bit his wife. “We’re not going to quit the day job yet. Somebody has to keep the business moving.”

Louie and Leslie Campasano of Clermont own The Green Moose, which is the diner in the movie. Louie got to know Corey fairly well over the six-week period of shooting.

Plans are to open the restaurant and rename it Giuseppe’s sometime this year. Although Corey and the crew are gone, Louie says he’ll never forget the experience. Eventually, there will be pictures of the cast, including Corey and Tanya, hanging on the walls of the restaurant.

“Until this experience, I didn’t realize how down-to-earth movie stars can be,” Louie says. “They’re just like us — human. They like to be treated like regular people.”

Catching up with COREY
By Hannah J. Ferguson

Most people know Corey from The Goonies (1985) — the little obnoxious Clark “Mouth” Goonie in his Purple Rain t-shirt. Now 22 years later, he’s in Lake County! Wonder what he’s been up to? We were, too, so here it goes.