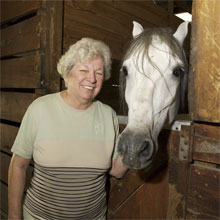 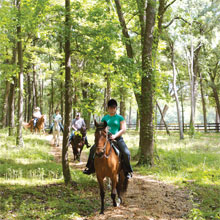 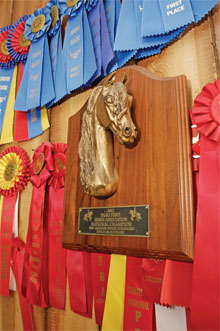 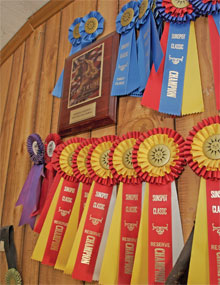 If you can get Barbara Young to sit down long enough to tell you the story behind Young’s Paso Fino Ranch, you’ll know that this dynamic whirlwind of a woman doesn’t know the meaning of the phrase “take it easy.”

“It was my husband, Arthur, who made the decision to buy a horse farm,” says Barbara. “He wasn’t well, and we were driving from Stuart, Florida up to Lake City to visit relatives. Our business at the time was building golf courses in South Florida. We owned and operated four. We were driving up Interstate 75 and he said, ‘Let’s go back to Marion County and buy a horse farm.’ That’s all he had to say to convince me. I am a real estate broker by trade and we picked out four places that were for sale.

We both loved the acreage here on State Road 326 and Young’s Paso Fino Ranch began.”

“Arthur called the ranch ‘God’s Country’ and it was a dream come true. Two months later he passed away,” recounts Barbara. “He lived long enough to see me ride one of our own horses. Now every horse that is born on the ranch carries his name as part of their official name — de Young.”

The 20-acre ranch is known for breeding, showing, and training national champion Paso Finos. It is one of the only places in Marion County that offers trail rides to the public. Special events include Paso Fino horse shows, group tours, and weekend packages in cooperation with the Ocala Hilton.

“We’ve had a lot of international tour groups come,” says Barbara. “We had fun with a Japanese group, none of whom spoke any English and were eager to ride our horses. You could tell by the big smiles on their faces as they were escorted around the paddock that they were having a great time.”

Senior groups from Oak Run, On Top of the World, The Villages, and bus tours from as far away as Missouri and Ohio, have all visited the ranch and enjoyed a barn tour, and demonstration  Paso Fino horse shows that Barbara puts on for them.

“We even offer a program called ‘Horse-manship for the Young at Heart’,” she says. “We’re very proud of our P.A.S.O.H. (People Assisting Students on Horses) summer program. It is a nonprofit program that helps inner-city kids learn about horses.”

“Our motto is breeding excellence in Paso Finos,” Barbara says proudly. “Our horses are champions, and so are members of my family.”

Young’s Paso Fino Ranch celebrated its 20th anniversary this past May 12. Internationally known trainer Carlos Tobon and his Tobon Paso Fino Studio will be offering clinics at her ranch this year.

“I really believe that Arthur is still here with us,” Barbara says. “I know he would be very proud, as am I, of our horses, our programs, and our family.”