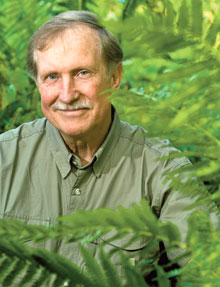 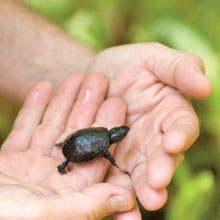 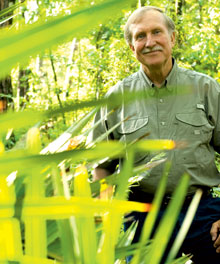 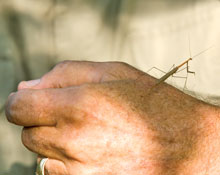 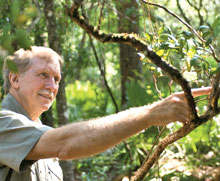 Prick his finger and Guy Marwick just might bleed green.

When at 11, his family moved to Pompano Beach, it didn’t take long for Marwick to explore the Florida Everglades.

“My friends and I would ride our bikes out to the edge of the Everglades,” recalls Marwick, now 63, his light blue eyes brightening at the memories. “Then, carrying camping equipment on our backs, we’d wade out through chest-deep water to one of the islands. We’d camp out and spend our days catching snakes and having great adventures.”

Adapting to being surrounded by water, Marwick became an avid diver while still spending as much time as he could in the wilderness. After graduating from Florida Atlantic University, he taught geography and civics in Broward County, two fields that would later play key roles in his future environmental activism.

And it was the development of his childhood outdoors playground that would set Marwick on that latter path.

“I watched the wilderness I had grown up in be destroyed by development,” says Marwick. “And that’s when I moved to the Ocala area in 1970.”

Only 26 at the time, Marwick bought 20 acres of undeveloped forest property west of Ocala in the Lynn area. While teaching at Osceola Middle School, Marwick spent his free time diving in Silver Springs, navigating the Silver River, exploring the Ocala National Forest, and building his dream home surrounded by pristine wilderness. He had found his paradise.

Marwick’s A-frame home, which blends so well into the surroundings that it could’ve very well have sprouted up from an acorn, was finished within two years. To supplement the sandhill and longleaf pines, Marwick planted magnolias, cedars, and azaleas. Decades later, the azaleas have flourished so well that the giant wild-growing bushes adorned with fuchsia flowers tower well over six-feet tall.

His acreage is teeming with wildlife — deer grazing in the front yard, regular black bear visitations, owls and hawks flying overhead, otter and turtles in the pond, bobcats and coyotes staking out their territory, and snake encounters along the widening footpath through the woods.

Surrounded on two sides by the Ocala National Forest, Marwick and his wife of 32 years, Pat, live in an idyllic setting. It would’ve been easy to hunker down here and not care what was happening in the outside world, but Marwick doesn’t just care about his own little piece of paradise. He cares about all of Florida’s green spaces and wants future generations to enjoy it like he has.

That desire manifested itself into the creation of the Silver River Museum and into an ongoing conservation activism that has led to the state purchase of thousands of acres of wilderness. The latest cause that Marwick was deeply involved in was the state purchase of the more than 4,400-acre Avatar property in November of 2006.

“I saw what happened in south Florida and in the Pompano Beach area,” says Marwick. “I’m determined not to have it happen here in north central Florida. Being a teacher, I’ve always believed in educating the public about the importance of our wilderness areas — of our green spaces — is one of the most important things we can do to preserve them.”

While still teaching at Osceola Middle School in the mid-‘80s, Marwick had the idea for a natural history museum that would give public school children hands-on experience with nature.

“We had the perfect setting at the Silver River State Park,” says Marwick, who submitted his proposal for a Christa McAuliffe Fellowship in 1987. “With the seed money from the fellowship, we began to raise money for the project.”

Leaving his teaching position, Marwick “lived and breathed the project for those initial few years.” The effort paid off. In 1991, the Silver River Museum and Environmental Education Center officially opened. Today, more than 15,000 public school students take field trips to the center each year where they get to experience nature first-hand. The center is also open to all students and the public as well on weekends.

Next up was Marwick’s involvement in Pennies for Parks, which spurred the creation of recreation areas like Carney Island, Brick City Park, and Horseshoe Lake. All of Marwick’s work led to the existence of a bona fide city parks and recreation department.

His retirement as Silver River Museum director in 2004 did not leave Marwick with much idle time on his hands. By then, he was part of such groups as Silver River Basin Working Group, Marion Audubon, Florida Defenders of Environment, and Smart Growth Coalition of North Central Florida. His calendar is booked months ahead with meetings, field trips, speeches, and visits to Tallahassee.

“It’s never ending,” says Marwick of his schedule and the causes. “But I still feel very passionate about preserving our green spaces. There’s no stopping growth, that’s a given at this point. But there is such a thing as smart growth.”

Marwick and his fellow conservationists saw nothing smart about the proposed 12,000-home development that would’ve adversely affected the water quality of Silver Springs. It would’ve destroyed the ecosystem of the 4,471 acres, home to an estimated 300 species of plants and animals.

Spurred by the efforts of Marwick and his group, the state partnered with the Nature Conservancy and Marion County to purchase the property from Coral Gables-based developer, Avatar Properties Inc., for $76.35 million. It was the third most expensive environmental land buy in Florida history.

And according to Marwick, one worth every penny.

“This land is an important part of the recharge area for the Floridian Aquifer,” says Marwick. “In addition to the sewage wastes, residents of all those thousands of homes would’ve used lawn fertilizer that would have found its way into the aquifer. That’s what really hurts the aquifer and causes the springs to decline. There would’ve been no recovery from this kind of negative impact.”

With the Avatar property purchase in the books, Marwick still has plenty of projects to keep him occupied. There are developments planned for Crystal River and Rainbow Springs, as well as monitoring the management of the Marjorie Carr Harris Cross Florida Greenway and other public lands. Another project is Land Development Regulations (LDRs) for springs protection.

“We have to plan for future growth in a smart way,” says Marwick. “And we have to protect our green spaces, not just by 30-year leases, but in perpetuity. We need to strive for nothing less. Either we direct growth or growth will direct us.”

WANT TO GET INVOLVED?