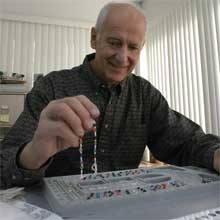 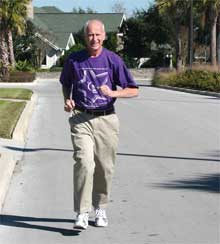 This past year, Ed Klann walked both the Leukemia and Lymphoma Society’s Light the Night Walk and the American Cancer Society’s Relay for Life. Armed with a cane for support, Ed struggled to complete the walks, but he did.

He finished last both times.

What makes Ed’s story so compelling is that he walked at all. The first event took place just five weeks after his March 28, 2005, diagnosis of non-Hodgkins lymphoma type B, an aggressive cancer of the cells in the lymphatic system.

“It was very difficult,” Ed says. “I decided to walk for myself and to try to help someone else who might be going through the same thing as me. I want people to know that you don’t have to give up living when you have cancer. I’m not a quitter.”

Ed’s cancer diagnosis came as a shock. He went to the doctor for a seemingly normal check-up and ended up having a regularly scheduled colonoscopy. There were no warning symptoms. When questionable test results came back, Ed was sent for further testing.

“My doctor said he had something to tell me and that it wasn’t good,” Ed recalls. “I found out later that they didn’t expect me to live a week.”

An 8-session chemotherapy regimen was ordered to fight Ed’s cancer. During his first treatment at the Oncology Center in Ocala, he noticed a beautiful sterling silver and Swarovski crystal bracelet in a display case at the center. The delicate bracelet featured 16 colored crystals, each representing a different form of cancer. Ed purchased the Cancer Awareness Bracelet for his wife, Arlene. Upon his next visit, Ed wanted to purchase a second bracelet for a close friend. Unfortunately, they were gone. The beautiful jeweled bracelets were designed and pieced together by the nurses at the center to raise money for the Relay for Life rally, which recently ended, taking the production of the bracelets with it.

So Ed had an idea.

“I decided to make and sell the bracelets myself to support the upcoming Relay for Life,” Ed says. “As my treatment progressed and I could no longer make the bracelets, my wife took over for me.”

Today, some four months before the next Relay for Life, Ed and his wife have already made and sold more than 500 bracelets and they have more than 120 on backorder. In addition to his bracelet endeavor, Ed has been creative in finding other ways to raise money for cancer awareness and research including auctioning off an original Horse Fever book, complete with artist signatures. Plans are also in the works for a charity golf tournament on April 8 at Royal Oaks golf course.

If there’s one message that Ed wants to pass on to others in his situation, it’s that despite his ailing health and weakened body, he continued to fight back. Ed endured his last chemotherapy treatment on Oct. 12 and is now cancer free. What has been, in reality, less than 12 months seemed like an entire lifetime for Ed and his family. He describes his cancer as “the beast that lived inside me.”

At 66 years old, Ed is tall and lean, weighing in at 180 pounds. He used to weigh 245. Since his initial diagnosis, two things have remained constant: Ed’s faith and determination. His ordeal has given him a new outlook and respect for life.

“Since this occurred, I’ve come very close to the Lord,” Ed says. “And my friends and family have given me so much as well; one couple alone must have sent me a dozen get-well cards.”

It’s that compassion and support Ed felt from his loved ones that have allowed him to push on. This year, Ed is looking forward to the 2006 Relay for Life.

“I’ll be there,” he says. “And this time I’ll walk without my cane. I’ll be there to support all of the new survivors.”

For more information or to register for any of the listed walks, call the American Cancer Society at (352) 629-4727.