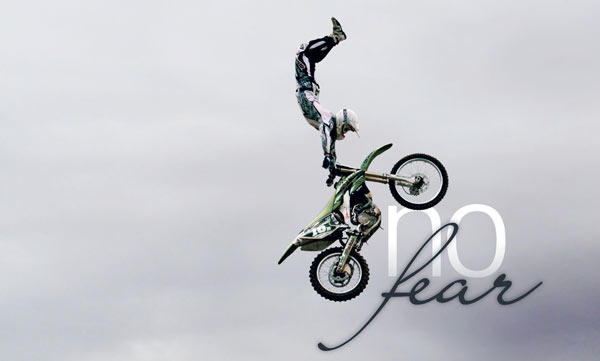 Since he was four, Ocala motocross and freestyle star Jadd Knox has been pushing himself—and his bike—to the limit, and he’s got the scars to prove it. But make no mistake, this world-class rider is all business every time he hits the track.

Any minute, the sky’s going to open up and pour, but Jadd Knox is certain he has enough time for a few jumps before the interview. He quickly ditches his T-shirt, climbs into a track suit, and pulls on his boots. He grabs a helmet as he breezes through the door of his parents’ local off-road facility, Hard Rock Cycle Park, and heads across a muddy field toward his bike.

The sky is pitch black in the distance and a wind has picked up just as he swings onto his bike and fires the ignition. The engine whines and the wheels strain to grip the muddy ground as he takes off toward the jumps. After a few practice runs over the jumps and a couple of tricks—the Kiss of Death, the Cliffhanger—he’s forced to stop.

“The wind’s getting in the way,” he says as he pulls up and kills the engine. “I could give it a try, but the ramp is slick. I don’t have any carpet down.”

He’s clearly disappointed, but then his demeanor suddenly brightens. 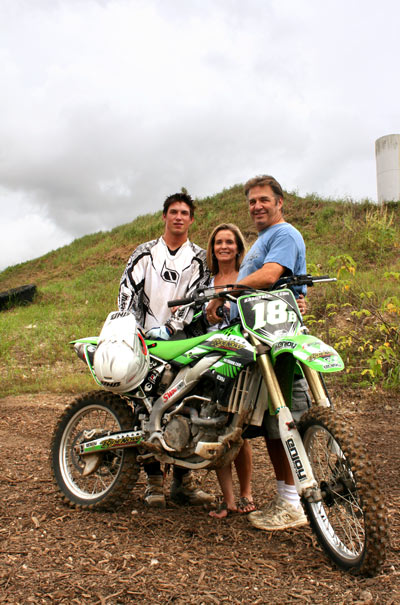 “For what?” I reply, knowing full well what he means.

“Come on,” he counters, as if asking a magazine writer to climb onto the back of the bike that was airborne mere seconds ago is the most natural thing in the world. “Let’s go.”

“What are we going to do?” I venture to ask.

“Nothing. We’ll just go over the Rollercoaster.”

I have no idea what that entails, but passing up a chance to ride shotgun with one of the best freestyle motocross guys in the world seems like a waste. I hop on the back and we head off toward the Rollercoaster—a series of high (very high) mounds that Jadd normally rides about 100 times faster. The course winds around clusters of pines and other trees too blurred by our speed to identify, and the bike zips neatly along, handling every bump and turn effortlessly. Not until we arrive back to Hardrock’s main office, just before the rain sweeps in, does the exhilaration of the ride set in. In a word, the Rollercoaster was thrilling. 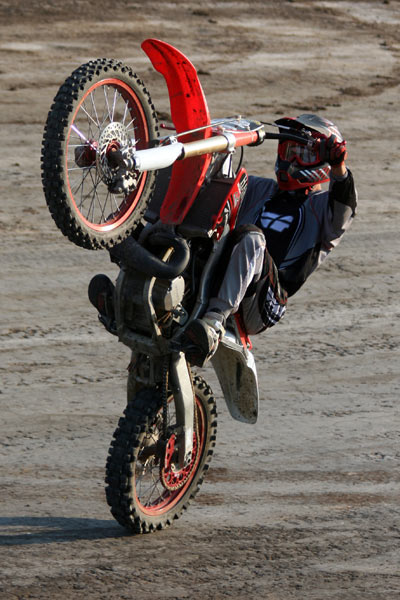 “It’s fun,” agrees Jadd, now back in a T-shirt and shorts and sitting comfortably on a stool behind the office’s counter.

The 26-year-old, who moved with his family to Ocala in 2000, has ridden dirt bikes most of his life, competing as a youngster in motocross—bike racing on off-road courses—and switching in recent years to freestyle motocross, in which riders perform jumps and stunts for judges. He was the Illinois State Motocross Champion in 2000, and between 2003 and 2004, he won 28 out of 32 arenacross jump-off contests.

Chatting as the rain bears down outside, Jadd is affable and easy-going, even when the subject of injuries is broached. At last count, he was up to 26 broken bones. That includes both wrists a total of seven times, his collarbones 11 times, both femurs at the same time, both shoulders at the same time, and the list goes on. The most painful injury, though, didn’t require a cast.

“The spleen was probably my worst,” he says, lifting up his T-shirt to reveal a long, pale scar on his abdomen. “Tore my spleen completely in half. I was racing arenacross in Columbus, Ohio, and some kids had dug a three-foot hole in the face of the jump. Nobody noticed it. I was the first one out, came around, hit the jump, and it kicked me. I hit my chest on the handlebars.” 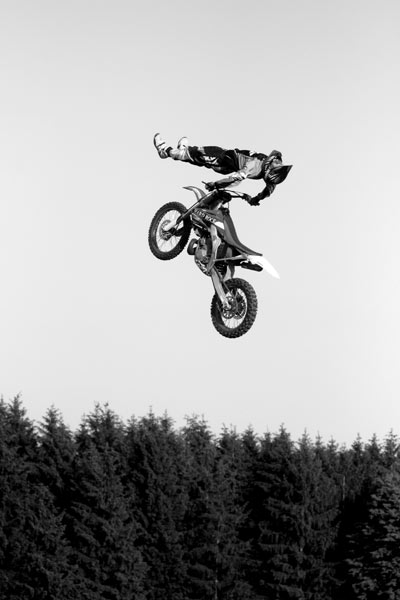 Jadd didn’t crash, but internally, his body was in turmoil. Thinking he had broken only a few ribs, he circled around, moved over a little on the approach, and successfully landed the jump. He immediately felt light-headed and begrudgingly agreed to return to the motor home where he stayed while on the road to rest. He tried to sleep it off only to wake up six hours later in excruciating pain. Friends rushed him to a local hospital where he underwent emergency surgery to stem massive internal bleeding. Just before he went under, he recalls the doctor saying he had mere minutes to live.

To hear Jadd tell it now, the whole incident, safely in the past, just makes for a good story. Like most serious athletes, Jadd rarely entertains the what-ifs of his sport. In fact, the very last thing he’s thinking about as he approaches a jump on his 250-pound MSR bike is the jump itself.

“Usually I’ll think about what I’m going to eat for dinner,” he says. “Am I going to see a movie tonight? Doing tricks, you almost have to shut your brain off because it’s so intense. There’s a lot of focus, but it’s a subconscious focus. A lot of guys quit racing and freestyle because they’re so worried about getting hurt. As soon as that enters your mind, you’re done. You might as well go play golf.”

In addition to a couple dozen broken bones, Jadd has also amassed a lifetime of fond memories and unique experiences thanks to his sport. He’s been to every state in the contiguous U.S., logged 300,000 miles on his van along the way, and performed overseas for months at a time. Most recently, he was hired for exhibition shows in Japan. The schedule was a grueling three shows a day, every day, for three months straight.

“But it was fun,” Jadd says. “It’s better than working a regular job, that’s for sure. Most of us are doing pretty well for playing around on our dirt bikes on the weekends.”

Contrary to the appearance of his job, Jadd isn’t reckless—on the track or off. In fact, he’s never even had a speeding ticket. Traveling to shows on a pretty tight budget, you couldn’t afford to speed away all of your gas, he explains. Furthermore, since he started freestyle and moved away from the close contact of motocross, he hasn’t been injured. Being more in control and less at the mercy of other riders’ errors is something he prefers. Jadd also keeps a consistent schedule. He eats healthily and works out regularly, even if the extreme aerobatics of his sport haven’t made him very flexible.

“Yeah, I can’t touch my toes,” he says, looking a little confounded himself. “It’s funny. Your body just kind of does it, even though I couldn’t sit here and do it.”

His parents, Glenn and Donna, are extremely proud of their son’s accomplishments, although his mother can’t bear to watch him perform. Glenn calls his son a natural and has little doubt he’ll reach his ultimate goal of competing in the X Games.

“He’ll make that,” his father says. “He did an X Games jump up north. They do a 115-foot distance jump and he did 130 feet. He also wants to do some of the Red Bull stuff, jump from building to building. He told me, ‘They can think up anything they want and I’ll do it.’”

True to form, Jadd remains humble yet optimistic about future accomplishments. He spent part of the summer practicing a new trick over a foam pit up in Massachusetts. The tricks he’s perfecting, in hopes of getting to the X Games, are so top-secret, he would only share them off the record. Suffice it to say, they’re both exciting and seemingly impossible.

But what about life beyond the X Games and future Red Bull shows?

“Eventually, I’d like to buy a 20-acre piece of property in the Florida-Georgia area and do camps for kids,” he says with his signature smile. “That’s my goal.”

Five things you should know about Jadd Knox.