In an enlightening and often humorous hour-long chat, Bret revealed his musical influences, the new-and-improved Rock of Love, and why he once felt the urge to punch Gene Simmons of KISS. 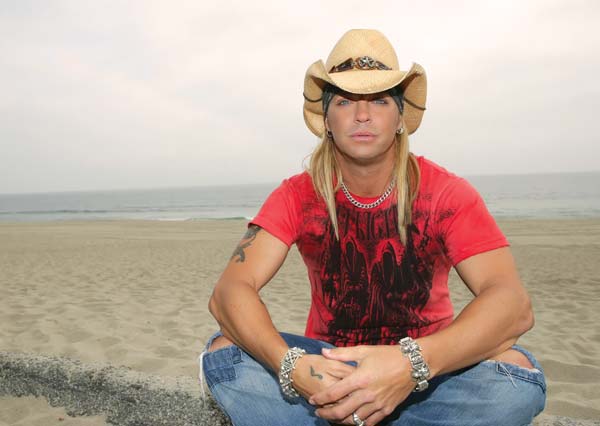 What’s not to love about Bret Michaels? From his string of now-classic Poison hits—Do you remember “Every Rose Has Its Thorn,” “Something to Believe In,” and “Nothin’ but a Good Time”?—to his hugely popular VH1 reality TV show, Rock of Love, the rocker has entertained millions for more than two decades and earned a legion of loyal fans along the way.

But don’t let the affable, just-a-Pennsylvania-kid-turned-glam-rock-star persona fool you. Behind the tattoos and bandana is one very driven man. This is the same musician, after all, who has sold an impressive 25 million records.

WHAT CAN FANS EXPECT AT THE SHOW? We play all the Poison hits. I do solo stuff and some cover stuff. We mix it up. It’s a party.

WHO WERE YOUR MUSICAL INFLUENCE GROWING UP? Some of the first music I was exposed to was traditional country. And my mom liked The Rolling Stones and The Beatles, which was great. The first two records I bought were Led Zeppelin II and Lynyrd Skynyrd’s Pronounced [Leh-Nerd Skin-Nerd]. I bought them at a garage sale. Then I stole a KISS album. Got caught.

HOLD ON. YOUNG BRET MICHAELS STOLE A KISS ALBUM? I knew it was wrong—I just couldn’t help it. I was such a fan. I was at Sears, and I stuck it under my jacket and walked out, and the guy caught me in the parking lot. He goes, “You have something.” I go, “Yeah.” “Did you open it?” “No.” He said, “Give it back and get out of here.” 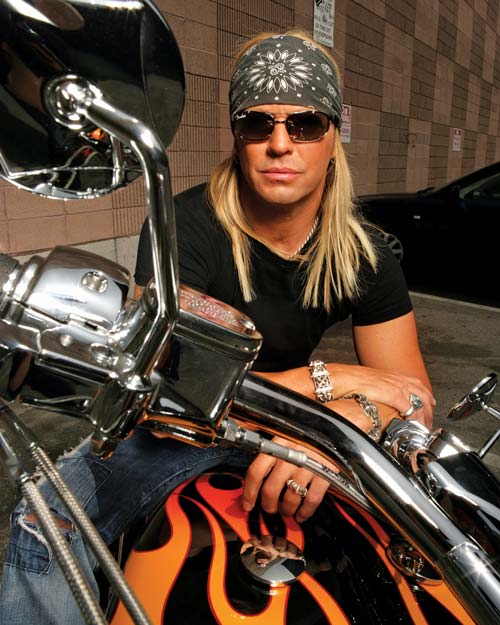 SAVING UP MONEY TO BUY A NEW RECORD WAS A HUGE DEAL AS A KID. Huge! My dad would drop me off at the mall, and I’d go to the record store and spend hours looking at what I was going to buy. That’s what happened—they dropped me off at Sears, and I couldn’t afford it. After that, I just worked for my money and did it the honest way.

SO WHO ARE YOU LISTENING TO LATELY? Kid Rock, Buckcherry, Incubus, Metallica, Kenny Chesney, Toby Keith, classic Aerosmith, Skynyrd. I like folk music sometimes—James Taylor, Jim Croce. It just depends on the mood.

TELL ME HOW ROCK OF LOVE CAME ABOUT. VH1 approached me and was looking for a legendary artist that could party and be fun, that was single, and wanted to date crazy girls on a show. I said, “By legendary, do you mean been around for a long time?” (laughs) I said, “It has to be my real life; it has to be music.”

I GOT A SENSE FROM WATCHING IT THAT YOU LIKE DOING THINGS OUTDOORS AND BEING ATHLETIC, ESPECIALLY ON THE DATES. Absolutely. I was very forward in saying, “If you’re going to make me go sit by a Jacuzzi every night and listen to everybody argue, you can get someone else ‘cause I can’t do it. I want to race motocross. I want to take the girls out to ride horses.” It was a blast for me, and the girls were great sports.

YOU’RE ALREADY FILMING THE THIRD SEASON, ROCK OF LOVE BUS. WHERE’S THIS BUS TRAVELING TO? Where’s this bus traveling to? We’re going across America. We’re starting in Louisville, Ky., and then Chicago, Indianapolis. We make our way down to Nashville, and then finally down to Destin, Pensacola, Jacksonville. We’ll drive right through Ocala.

YOU’LL BE ON THE BUS WITH ALL THOSE WOMEN THE WHOLE TIME? Uh-huh. (laughs) I may not make the Ocala show!

I HEARD THAT EVEN GEORGE CLOONEY IS A FAN OF THIS SHOW. George said one of the funniest things. He was talking about the show in an article and said, “I don’t know what happened. I turned the show on, and I became addicted.”

VH1 HAS TO BE HAPPY WITH ITS POPULARITY… It’s become the highest-rated show in the history of the channel.

SO, WHAT HAPPENED BETWEEN YOU AND AMBRE LAKE [THE SEASON TWO WINNER]? Unfortunately, when you get done with reality TV, it takes about five or six months before you can start seeing each other because you’re not allowed to get caught together. That makes it tough. She lives in Chicago; I live in L.A. and spend a lot of my time on the road. But besides being a dating item, we became really good friends. It never officially ended.

LOOKING BACK, HAS YOUR CAREER BEEN WHAT YOU IMAGINED? It’s been everything I wanted it to be and nothing I thought it would be. I understand why a lot of musicians are bitter. What happens is you’re in your basement band in Pennsylvania for the passion of making music. Then you go to make a record, and you realize that 99.9 percent of the people in the industry are selling product. That’s the reason you have to have tough-as-nails skin.

WAS IT TOUGH IN THE BEGINNING? My big record signing—don’t laugh too hard—I got dressed up in my spandex, tucked into my cowboy boots, went down to a warehouse in El Segundo, Calif., and helped package my own records. I looked at Bobby [Dall] (Poison’s bass player) and go, “I want to punch Gene Simmons right in the stomach for lying to me in the rock ‘n’ roll brochure.” True story! (laughs)

SO IT’S NOT AS GLAMOROUS AS IT SEEMS? It can be. The glamour comes in if you financially do well for yourself. You get to have some things that are nice. But the glamour for me has only been good music and a great concert. And I’ve got to do that for 20 years now.

OKAY, I KNOW YOU’RE BUSY, SO LAST QUESTION. WHAT’S THE PERFECT DAY OFF FOR YOU? I’m with my daughters almost any day off. I’ll work out right away, then I’ll get my bike and ride—that’s a must. And I’ve always got music cranking around the house. I just like to keep a good energy going.