Rather than relaxing with a cold drink in hand, Sally Chappell prefers her weekends to have a little mud in them. Throw in some obstacles like scaling an 8-foot fire wall or climbing a cargo net and she’s even happier. In fact, on most weekends Sally indulges in what’s become her obsession—competing in obstacle races and mud runs. And for those who really want a challenge, many events combine both elements, hence the term obstacle mud runs.

These events have names like Battle Dash Obstacle Challenge, Mile of Pain, Superhero Scramble, Tough Mudder and the ominous Spartan Death Race. They vary in distance from 200 yards to 26.2 miles (yes, that’s marathon distance); some even take place at night or over days. A sampling of what a competitor will encounter on a course includes mud crawling, rope climbing, plank jumping, scaling fire walls, zip lining, leaping flaming hay bales and negotiating through mazes seemingly created by mad men that test not only your athleticism but your sanity as well. Some events are timed, while others are simply called ‘challenges.’ One suspects the challenge being that you survive.

“I love all of the races. But the more challenging the event, the better I like it,” says Sally, 50, a former jockey who took up the sport three years ago. “I like to have fun, but I’m super competitive, too.” 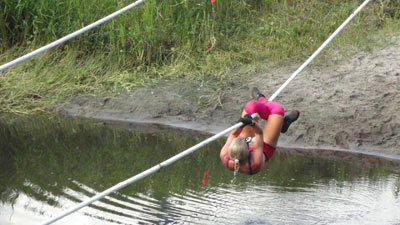 Indeed she is. Case in point was a weekend this past August. First, Sally competed in the Central Florida/Orlando American Mud Race on Saturday. The 5K (3.2 mile), 20-obstacle event was held at a motor cross course and included racing through a wooded area and natural water obstacles, aka mud bogs and swamps. Then on Sunday, she moved on to the Battle Dash Obstacle Challenge in Winter Garden at a private ranch. Described as a ‘Ninja Warrior-type obstacle course,’ this 200-yard daunting dash takes competitors through a series of ever-increasingly difficult obstacles. Think climbing free-hanging rope ladders and flipping giant tractor tires. But the double-dare weekend was no problem for Sally. A member of Team MudRunFun (Southeast) and racing in the Elite division, she was the Overall Female Winner in both events. In the Battle Dash, she collected a $500 first prize.

“When you first start doing these events, you just want to get through them,” says Sally, whose 24-year-old son, Casey, often joins her at the races. “But then you start to develop different techniques to handle the various obstacles and your times start to improve. The better you are at technique, the faster you complete the courses. That’s when you start winning.”

Sally doesn’t remember a time she wasn’t competitive at whatever sport she pursued. Growing up in Santa Fe, New Mexico, she was a state high school track champion. At the University of Texas, where she earned a bachelor’s degree in adult health and fitness, she was also on the track team. A horse-crazy kid, Sally rode, showed hunter/jumpers and then went on to break and train horses for clients. After college, she began exercising race horses. At 27, Sally decided she wanted to become a jockey.

“Most people who become jockeys start when they’re teenagers, so I was getting a late start,” says Sally, an extremely well-muscled, petite blond. “But I knew I could do it if someone just gave me a chance.”

Based mostly at Oklahoma City’s Remington Park and other Midwest tracks, Sally rode successfully for 14 years. Over that span, her mounts earned more than $2.1 million in purse money. Being a jockey is a dangerous profession, rife with injuries, and Sally suffered her share.

“I broke many ribs, my pelvis, an ankle and had to have knee surgery,” says Sally. “By the time I was 42, I was beat up and tired. I decided it was time to retire from riding and find a new outlet for my competitive nature.”

Shortly after moving to Ocala in 2004, Sally began competing in road races, like the Ocala Half-Marathon, and later in triathlons. She quickly amassed winner’s medals, trophies and other prizes. Then she discovered obstacle mud runs and was soon getting dirty every weekend. As for training for the events, Sally describes her regime as “a minimalist one that includes some interval sprint training for speed and weight work in the gym for upper body strength.” Her training diet is just as bare bones, usually downing a whey protein banana shake two hours prior to a workout and/or event and another 30 minutes afterward. 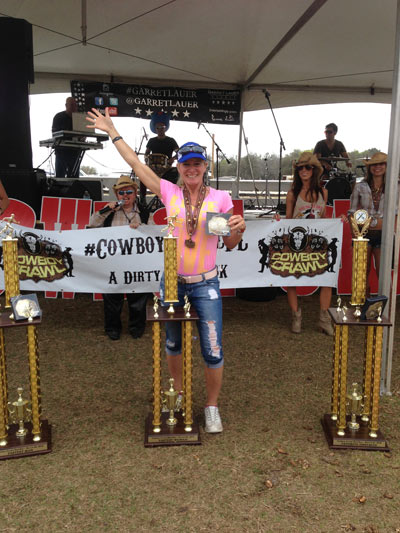 “The racing, not the training, is what gets me excited,” says Sally, who has an overflowing treasure trove of winner’s spoils and has lost count of how many events she’s competed in. “I like to go fast, and I like to win. That’s what makes me happy.”

That and crawling through a little mud.