Some of Ocala’s most significant African American cultural history is on view at the newly updated mural at Webb Field.

Ocala’s Black History Mural at Webb Field chronicles our community’s rich African American history through colorfully depicted panels that illustrate landmark moments and trailblazers and serves as both a vibrant attraction for visitors and an inspiring monument for future generations. 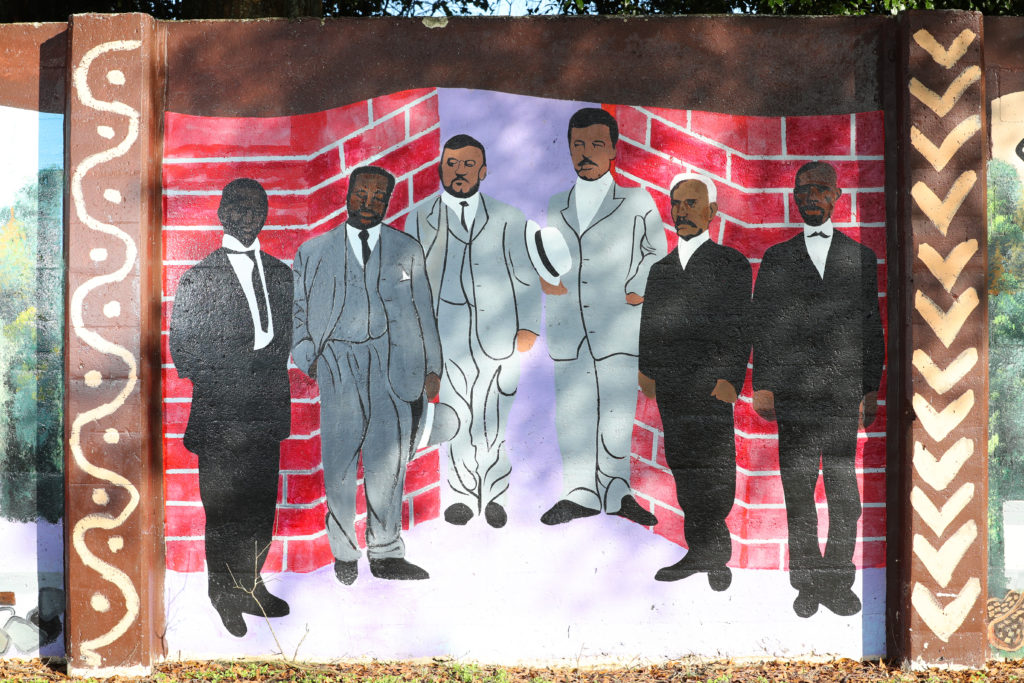 The artwork, inspired by the style of renowned artist Jacob Lawrence, is located a short walk from Southwest Broadway, a once thriving hub of black-owned businesses.

The mural project began in 2004 as a partnership between the College of Central Florida (CF), Brick City Center for the Arts (now Marion Cultural Alliance) and a youth summer art camp at CF’s Hampton Center. Several local youth organizations assisted in the project, along with a group of student artists from CF. Local artists Leonard Palmer and Bob Hazelton signed on to assist.

Jillian Ramsammy, Vice President, Institutional Effectiveness and College Relations at CF, recalled that the Appleton Museum of Art was featuring an exhibit by Lawrence at the time, while Brick City was simultaneously showcasing the work of local artists who were influenced by the painter.

Ramsammy says, “It was an opportunity to introduce youth to the work of this important painter who is well known for his works that explore the history of the African American experience.”

When the group was asked to create a community mural, there was surprise and excitement about the 29-panel, 200-foot-long wall on the perimeter of Webb Field at the Martin Luther King Jr. Recreation Complex. Ramsammy, former manager of the college’s cultural and conference centers, along with Michele Faulconer, who was the former gallery coordinator for Brick City, were instrumental in organizing the effort. 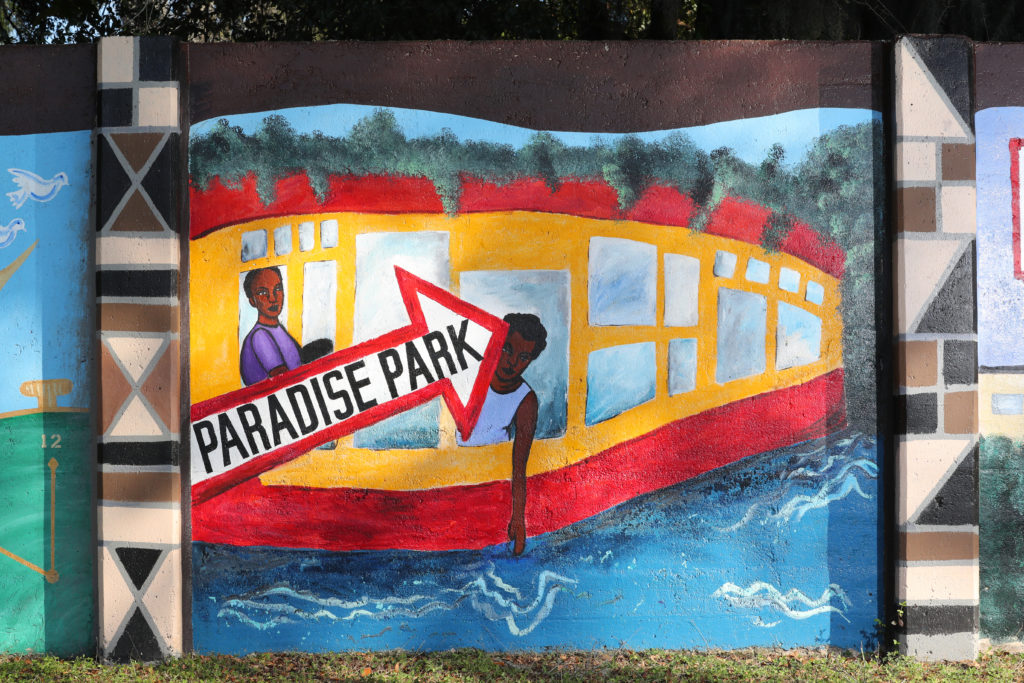 “Disbelief was quickly replaced by excitement as we walked along the length of the wall and brainstormed what we might do there,” Ramsammy says. “Nothing like giving artists creative freedom and a big empty wall.”

The only guideline for the project was that the mural include the history of West Ocala. Work on the mural took 10 months to complete.

“I left the area for a while and to be back and see it still there and still vibrant is a huge sense of pride for me as an artist and a teacher,” says Faulconer.

It’s difficult for her to pick a favorite panel along the mural, she states, saying she views each panel as meaningful. And, she wants visitors to understand how important Ocala was to medicine, banking and technology.

“History is not just in the books,” she asserts. “There is such a rich background here. Get out there and stroll the area and see what’s there, take in the history of the community and be proud.”

Ramsammy and the committee researched West Ocala to determine which local historic figures and prominent details needed to be included in the mural. They spent time at the Black History Museum and Archives housed at Howard Academy Community Center. The group also interviewed community leaders such as Juanita Cunningham, Peachie Jackson, the late Lois Miller, and the late Pinkney Woodbury to name a few. 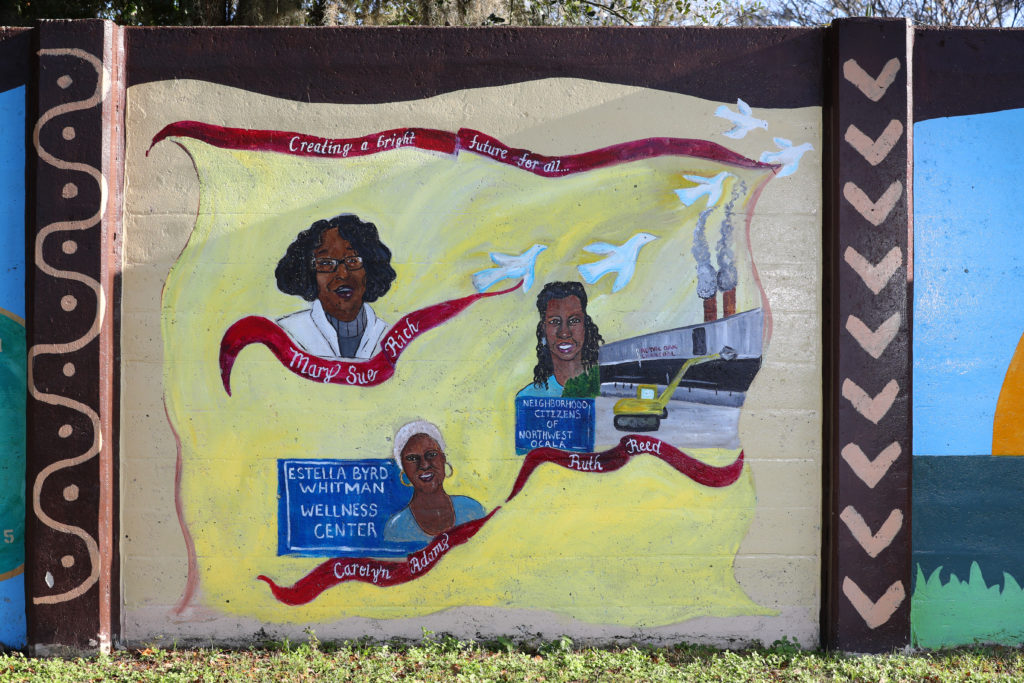 “It was the interviews with elders and leaders in the community that breathed life into the past,” she says. “We were outsiders to the community, and yet we were welcomed with such enthusiasm when we shared the project.”

The information gathered helped organize the panels to focus on education, social, business, faith, and recreation. Individual panels mark milestones such as the first registered black voters, Sheriff M.A. Counts as the first black sheriff in the area, and the list of blacks who held public office in Ocala and Marion County. The faith section depicts Mount Zion AME Church and its beautiful stained glass windows. The building that still stands on South Magnolia Avenue is the only surviving 19th century structure in the city.

Locals often refer to the area as Black Wall Street, which was a hub of black-owned banks and prominent businesses. The six founders of the Metropolitan Savings Bank are depicted on the mural, along with Paradise Park where blacks went to relax and enjoy amenities similar to those found at the then-segregated Silver Springs attraction. The mural includes the former Howard High School and the creation of the West Ocala Historic District in 2001.

Narvella Haynes, a native of Marion County who is a community activist, had a group of students with the YMCA Youth Achievers Program help with painting the mural 16 years ago. She remembers the students were excited to be involved and several learned about their own family history.

“One of the students learned that his aunt won a beauty pageant at Paradise Park, which was a big deal back in the day,” says Haynes, who witnessed some of the history depicted on the mural.

“As a child we would have to get up early in the morning to go to the white doctor in town. But we would have to wait all day because he would see white patients first,” Haynes recounts. “I’ll never forget that. Many of 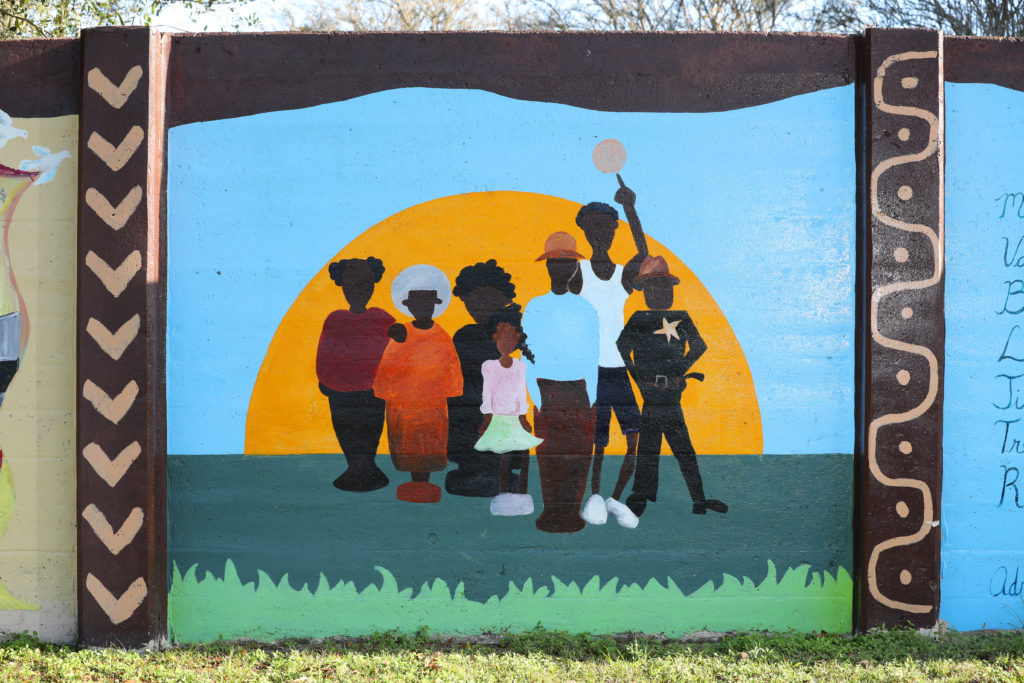 the students didn’t know blacks were treated that way. I lived it.”

Initially there was concern expressed that the Black History Mural would be defaced; however, the artwork capturing the historic past of Ocala’s black community was embraced and celebrated.

When Laura Walker took over as the Cultural Arts and Sciences Division Head for the City of Ocala three years ago, one of the first tasks to land on her desk was to inventory the public art within the city. The Black History Mural, battered by the elements and time, was in need of restoration.

“We got input from the community on who should be on the new panel,” Walker says. “There were many names but we got it down to three.” 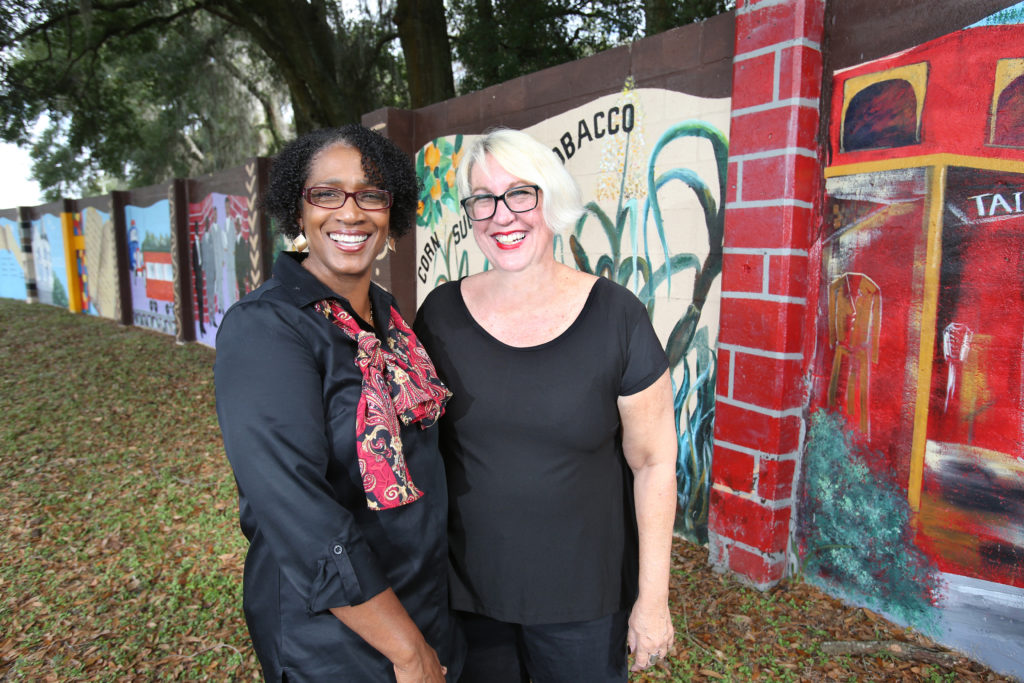 During the restoration phase, Faulconer was surprised one afternoon when Reed visited the site with her grandchildren to view the work. Faulconer says she believes the space is a teaching tool and the history should not be forgotten.

Restoration of the mural took several months, with work also scheduled during the Levitt AMP summer concert series at Webb Field to spark interest throughout the entire community. Walker points to the historical value of the mural for the community; serving to unite, educate and inspire pride.

The city is working to create educational materials that will be distributed to local schools, along with a public art education outreach program. In addition, there is discussion about providing golf cart tours for those with mobility challenges to be able to view the mural described by everyone involved as a “labor of love.”

With this restoration project, as well as the new black history murals currently being created for nearby Legacy Park, the story of local African American history continues to be told.