November is National Lung Cancer Awareness Month and doctors at Ocala Lung & Critical Care are encouraging smokers to quit the habit and hoping they’ll also consider early screening for the deadliest form of cancer in the U.S. 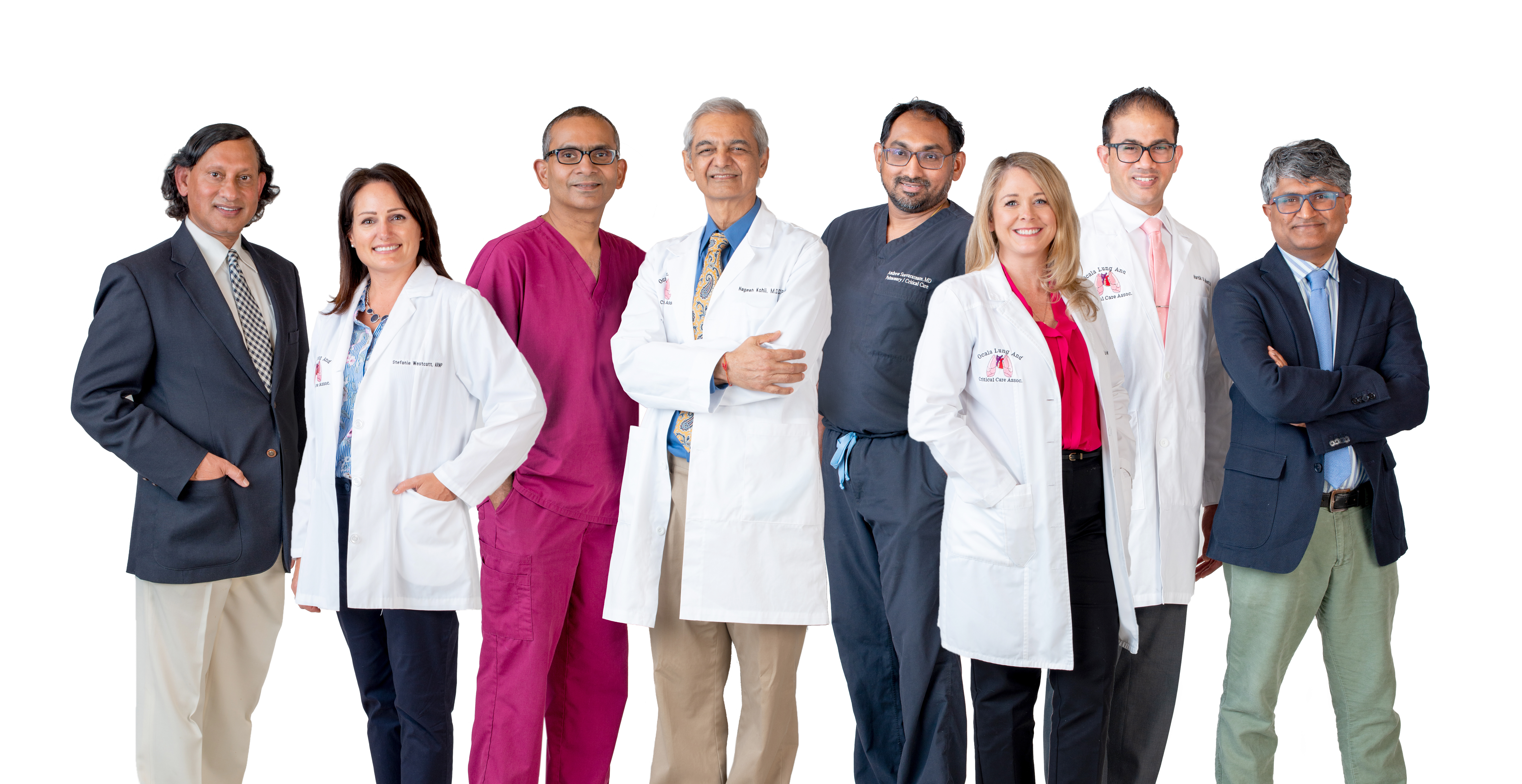 In honor of National Lung Cancer Awareness Month, the staff members at Ocala Lung & Critical Care are working together to combat lung cancer. At the top of their list is early screening, particularly for people between the ages of 55 and 77, and especially for smokers and those who quit smoking within the past 15 years. This includes people with a 30-pack per year smoking history.

“It’s a team effort,” insists Dr. Andrew Seevaratnam, a pulmonologist and critical care specialist who has been practicing in Ocala for 11 years and has come to be known by his patients as Dr. Andrew. “I’m just a part of it,” he says. “All of the six physicians and four nurse practitioners are involved in all levels of diagnosis and treatment up to and including follow-up care.”

According to the Centers for Disease Control and Prevention, lung cancer is the third most common form of cancer in the United States. More people die of lung cancer than from any other type of cancer, the CDC website states.

“The thing with lung cancer is, it usually doesn’t present with symptoms early in the disease,” Dr. Andrew explains. “By the time the patient gets symptoms it has spread to other parts of the body. That’s why it’s called a silent killer. With screening we can detect lung cancer early. What we do is a stage shift. We want to shift the stage where lung cancer can be detected to Stage 1 instead of Stage 2, 3 or 4 and before it spreads to other parts of the body. If we can detect it early when the nodule is much smaller it’s easier to take it out and we may not have to use chemotherapy or radiation.” 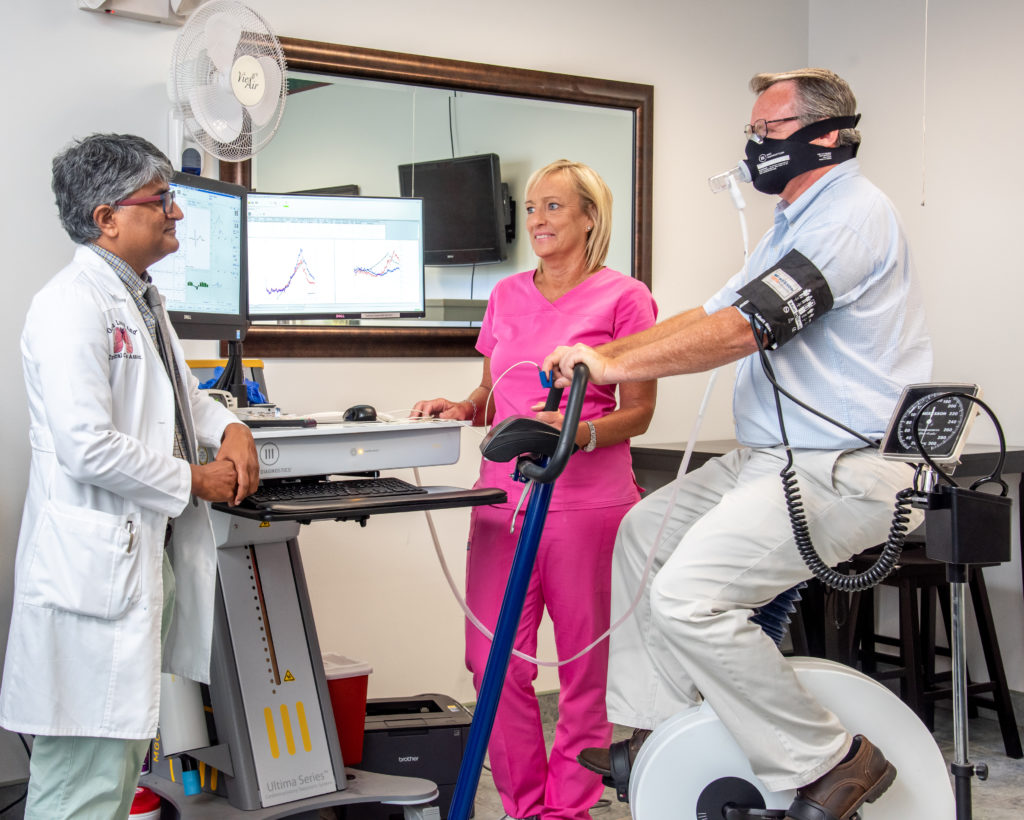 The early screening helps to determine which nodules—even very small ones—are cancerous so treatment and recovery can begin early, assures Dr. Andrew. He says many people have nodules on their lungs, but there’s no reason to panic. “We look at it with the patient, counsel them, and calculate their risk for lung cancer. Not every nodule you see is lung cancer; in fact most of them are not.”

According to the American Lung Association (ALA), 541,000 Americans living today have been diagnosed with lung cancer at some time in their lives. The ALA designated November as Lung Cancer Awareness Month and placed an emphasis on the need for preventive care.

“It’s a good time for people to stop smoking,” reflects Lori Muder, APRN, the lung nodule clinic navigator at Ocala Lung. “I emphasize lung cancer screening and smoking cessation, and I provide them with ways to quit through nicotine patches, lozenges and medications.”

Eleanor Tapp knows what it’s like to fight the quit-smoking battle. The 56-year-old Belleview resident got into the habit when she was 15 years old, setting her up for a longtime struggle that didn’t stop until last year when she was diagnosed with Stage 3 lung cancer. Tapp credits the care she received from physician Dr. Nagesh Kohli and nurse practitioner Muder for the treatments and advice that helped her reach remission.

“I tried to quit before and never could,” admits Tapp. “I was coughing like you wouldn’t believe, and I was short of breath. This time Lori told me to try little stick pretzels. She said, ‘Carry those with you and when you get the urge for a cigarette you’ve got the pretzel.’ It worked. I haven’t smoked in eight months. I feel a lot better.”

According to Florida Health information, three months after you quit smoking your lung function improves up to 30 percent. After 10 years your risk of dying from lung cancer is about half that of a smoker’s.

“The staff at Ocala Lung works closely with all hospitals in Ocala and The Villages through a multi-disciplinary tumor board approach to better serve our community,” Muder attests.

Ocala Lung uses the latest technology, including navigational bronchoscopy and a SPiN electromagnetic navigation system, which operates much like a GPS, to further evaluate and biopsy lung nodules. Muder notes that 92 percent of those screened early have a 10-year survival rate, while only 15 percent have a five-year survival rate when the cancer is found in the late stages.

“Symptoms are typically not present in the early stages of lung disease,” contends Muder. “By the time symptoms appear, cancer has often spread to late stage disease. By screening early we can potentially save lives.”