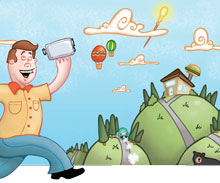 What do a bad-driving vigilante, a rooftop shuttle launch, a bear crossing, and a Burger King commercial all have in common?
Time’s up.

They’re each Ocala-based videos posted on You Tube for the whole world to see. Check out these 20 local favorites from the Internet’s newest cultural phenomenon. It might just be the wackiest hour—or two—you spend online this week. 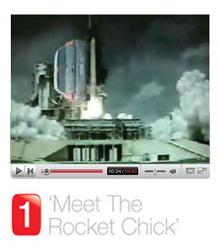 One of the quirkiest videos I looked at while “researching” this article. This clip intersperses NASA launch footage with scenes of driving around Marion County. Includes lots of cool cutouts and uses Elton John’s “Rocket Man” as its soundtrack. Bonus points for the cool tune, although the whole thing feels a couple of minutes too long. Easy fix, though—just move the play bar to the parts you want to see. Yes, this is the future of TV. Our children will probably think it was weird that you couldn’t always pause, rewind, and fast forward every show like a TiVo box. 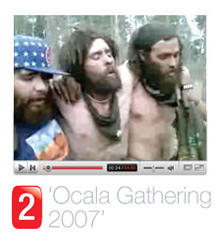 Anyone who has lived in Ocala for a while has heard about the Rainbow People in the Ocala National Forest. This clip offers a different side to their oft-maligned reputation, showing how their community worked together in forming a bucket brigade to put out an out-of-control wildfire in the dense woods. Lots of shaky camera work, a few occasional curse words, and not professionally edited, but this short clip captures a rare moment in the lives of these enigmatic people. 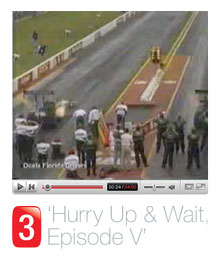 Another entry from the user, “OcalaFlorida,” but this one takes a more serious tone. With more than 80 public driving videos posted as of press time, this self-proclaimed “Mr. Speed Limit” wants to get the message out about the proliferation of unsafe drivers in our county. This clip is one of the best (and, no, I didn’t view every single one!) because of the professional editing and the well-paired music, especially Sammy Hagar’s “Heavy Metal” that kicks the footage into overdrive at the four-minute mark. He sarcastically compares local driving patterns with drag racing at Gatornationals in Gainesville. In contrast, he shows how his steady driving, by using cruise control often, gets him places just as fast as the speed demons. “They may be the champions, but I get the last laugh,” he says at the end of the clip. “I save gas and money.” 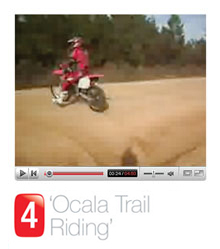 Exciting footage of a dirt bike chase on an undisclosed off-road trail. As Bush’s “Machinehead” reaches its climax, the two bikes’ journey gets more intense as they speed down the ever-narrowing passage. From the perspective of the trailing bike, we get a driver’s-eye view of every overhanging limb, every dip and curve of the road, every throttling maneuver through the powdery sand. Naturally, there are a couple of wipe-outs. Fortunately, we get to take this trip from the comfort of a favorite chair. 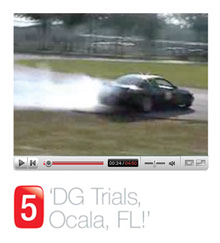 This one is a lot of fun—dozens of local cars drifting through the curves of the go-kart track near the I-75 flea market. Lots of screeching tires with quick editing and no boring parts, just three minutes and 33 seconds of racing action. Don’t even think about hauling your big ol’ Honda Odyssey out to the track, though! 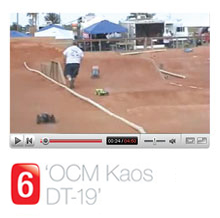 These cars are a lot smaller than the previous entry, but no less fun. This clip shows model car racing, tiny racers jumping hills and navigating turns, about a dozen cars in motion at any given moment. The short time is quite a relief, though, because—despite the coolness of this clip—I don’t think I could take much more of that high-pitched whine. 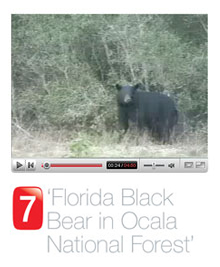 What would you do if you were whizzing down SR40 and saw a Florida Black Bear watching you from the road’s shoulder? Well, the couple in this clip got out the video camera for a fleeting glimpse of this threatened species before the guy bounded back into the protective enclave of the dense thicket. I don’t think I’ll drive that same stretch of road the same way ever again after seeing this brief reminder that we share our planet with many other amazing creatures—and that their fate is often in our hands. 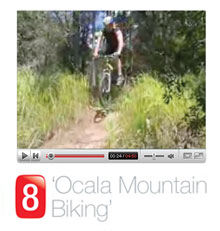 OK, if you’ve ever watched a few minutes of ESPN’s X Games, you’ll know what to expect here—lots of jumps, mucho high-speed acceleration, and many falls. Using P.O.D.’s “Youth Of A Nation” for a soundtrack, these riders—all male, by the way, and not very youthful—seem to take delight in their mishaps as much as their successes. Looks to me like they might be trying to get on MTV’s Jackass. If this short clip is any indication, they might just make it. Unless they kill themselves first. 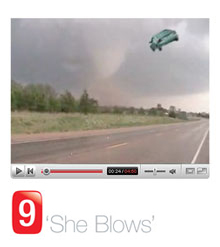 Another clip from Ocala’s most active You Tube participant, this one is like an amateur “Storm Chasers,” hand-held video of a twister touching down as the EBS warning bleets over his radio. Be patient—at 1:27 his Honda Civic is drawn up into the funnel. OK, not really. But it is funny how he skillfully “clipped” his car out and has it “floating” up into the sky. This You Tube’er definitely has too much time on his hands. 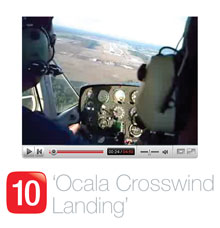 For those of us who spend all of our time on the ground, the bird’s-eye perspective of this clip is refreshing, to say the least. This brief You Tube posting shows the cockpit view of two pilots trying to land a Sundowner at Ocala International Airport during some nasty crosswinds. Compared to the other clips, this one jumps out for its starkness—no narration, no background music, just the task at hand of trying to throttle and steer the plane to a perfect touchdown. Just before the wheels hit the tarmac, the unseen pilot says, “I hope the brakes work!” Go online to find out what happens next. 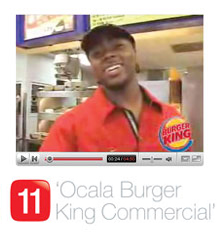 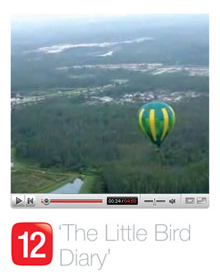 Two trike pilots fly across the state to have breakfast where Ocala’s Most Famous Resident, John Travolta, lives. Their flight begins at 6:26am at Manatee Airport, south of Tampa, and they capture great aerial shots on their way to horse country, especially the scenic Withlacoochee River and a cluster of hot air balloons. When two pilots arrive at Jumbolair in Ocala, they enjoy the Sunday brunch, take a brief nap, and prepare for their return, 135 miles away. They return at sundown after a long, but pleasurable day, disappointed at not seeing the actor, but knowing it was well worth the effort. Now it is for You Tube viewers, too. 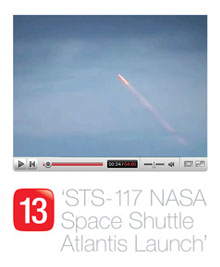 Most Central Florida residents have long gotten used to shuttle launches. They’ve become commonplace. Routine. If you feel this way, then this You Tube entry will remind you how special these flights really are. Using a Sony DSC-W70 digital camera positioned on a downtown Ocala high-rise, a NASA audio feed, and very little narration, this graceful flight arches over the sky and into its mission in orbit. What a great reminder of man’s accomplishments! 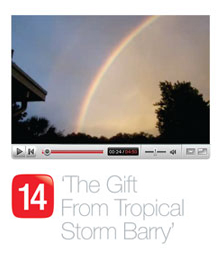 Taken on Saturday June 2, 2007, shortly after Barry rolled through the Saddle Oak Club Community in Ocala, this was his passing gift to Florida. The rainbow was so close that the couple had to take three still shots to capture it all. Then they decided that video was the best way to go. “The colors were so vivid—purple, blue, green, yellow, orange, red, and pink,” says viewer Pam Johnson. “It was very impressive.” 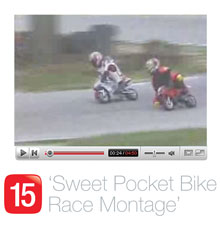 I love how the racing sounds are perfectly cut into the music. And the riders’ knees are bowed out so wide, they look like they’re going to scrape the ground on the curves. Some good falls, nice editing, quick pace. These minis provide maximum entertainment. 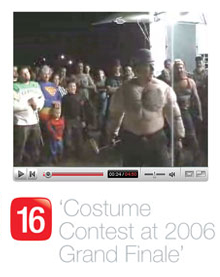 This definitely falls into the bizarre category. Shot during “Men Of Mystery,” the grand finale event at Wayne’s World of Paintball, this contest features an assortment of costumed geeks and freaks, enough to make the American Idol rejects look good. With an equal mix of villains and heroes, these hopefuls sported some funky names, too. Captain Cavity Search looked like a giant bale of hay wrapped in toilet paper and Comrade Communism was working the crowd big time. Skip the first minute of t-shirt tossing to get to the really weird stuff. I think these caped crazies’ 15 minutes of fame have long expired. 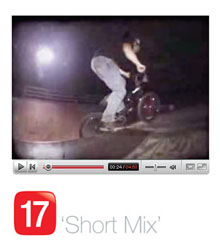 Great biking tricks of all kinds from Ocala and Gainesville BMX aficionados. These kids can do flips, spins, ride on one wheel, and many other gravity-defying stunts. One rider even perched himself at the wall of the jump for several seconds, hanging as if suspended by a hidden rope. Very cool, but very short—leaves the viewer wanting more. Considering normal You Tube excesses, that’s a good thing. 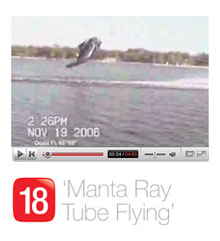 Cool footage of a first-time Manta Ray excursion in chilly, in 68-degree water last November. It took 45-50mph to achieve flight. This short clip shows them trying to get airborne against 5- to 10-mile-an-hour winds and looks more fun than dangerous. The clip ends too soon. Literally. 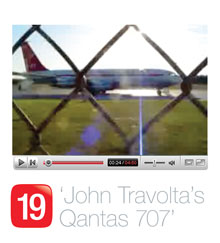 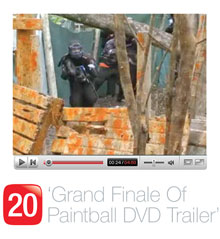 Imagine Oliver Stone’s Platoon with plastic weapons. That’s how serious paintballers take their sport and this is proof. Using jittery hand-held camera work and occasional graphics, this video features lots of hard-to-follow action and serves as a window into another lifestyle. With nearly 60 paintball scenario teams and 11 paintball tanks playing the 24-hour scenario paintball game, this video will provide lots of entertainment in just under six minutes. Flashbacks not included.

WACKY, WEIRD & WONDERFUL
SOME YOU TUBE ITEMS THAT DIDN’T MAKE THE CUT.