It is estimated that more than 200,000 American homes live either partially or totally off the grid, meaning the homeowners use alternative energy sources other than standard utility companies for electric, water, sewer or gas hookups. 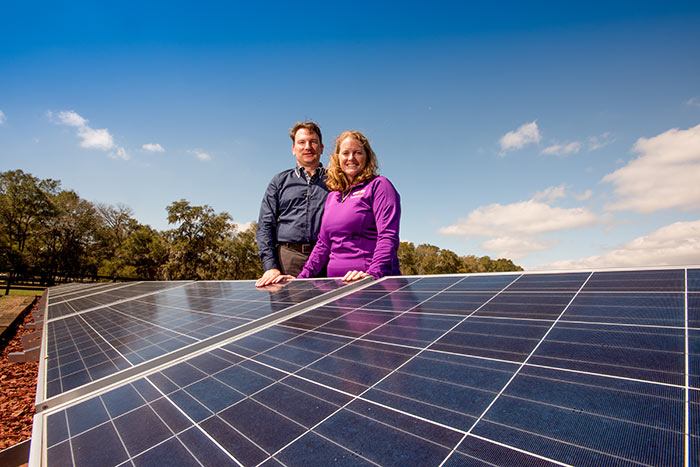 Florida’s abundant sunshine, on and offshore winds, many rivers and streams, accessibility to ocean tides, waves and currents, and constant near-perfect soil temperatures make the state ideal for utilizing one or more of these alternative energy sources.

In our area there are certain alternative sources more viable than others. For instance, wind turbines that produce electricity are dependent on stronger and more consistent wind speeds than are found locally. (The average wind speed for this area is approximately 6mph, and most residential turbine systems require a minimum of 9 to 12mph to generate electricity.)

Likewise, because we are a fair distance from the ocean on either coast, tidal or wave-generated power isn’t feasible either. And when it comes to micro-hydro power (basically a water wheel utilizing moving water to spin a turbine), a practical system requires both head (vertical drop) and flow (amount of water), which means the water hitting the buckets that turn the turbine must have a significant drop in elevation. Because of our basically flat landscape, hydro-power doesn’t produce enough energy to be considered a viable residential energy source.

But—when it comes to abundant sunshine and plenty of warm earth—Marion County is ideal for utilizing solar or geothermal residential power systems.

In Florida, state law requires all homeowners to connect to county or municipal utilities (the grid) whenever they are available. However, this doesn’t mean that you can’t take advantage of alternative sources to complement regular utility hookups. Sometimes “complementing” local utilities means producing more energy for your home using alternative sources than your home requires—and that can mean a consistent paycheck for the homeowner from the utility company.

“When I get the bill from my utility company each month, it reads ‘minus $35’ or ‘minus $45’ every month,” says Ocala resident Jerry Krebs. “Whenever the credit accrues to around $300, I call the company and they send me a check.”

Krebs has built a “net zero” home, meaning he produces as much energy as he consumes, effectively using little-to-no energy from the utility company to power his home. Krebs’ 3,600-square-foot, three-bedroom, two-bath home, built in 2012, utilizes both solar and geothermal energy for power.

Fellow suburban Ocala resident Jay Fratello and his family own a 17-acre farm in the southeast part of the city. Before installing a solar power system, it cost Fratello approximately $350 per month to supply the electrical needs of his 4,000-square-foot, older, two-story farm house. Now the Fratellos use only solar power to supply their energy needs.

“We have two air-conditioning systems and a pool, and we were spending so much on electrical bills that we felt we had to do something,” says Fratello. “We planned our solar power system to supply 125 percent of our electricity usage, and we are very pleased with how it has worked out. Our monthly bills are now around $5 per month, and even during very cloudy or rainy months when we don’t produce enough to cover all our power needs, we still have hardly anything to pay due to the extra power we supply back to the power company during good months. Every day that we produce more than we use, the overage is calculated by Duke Energy and passed on to the next month.”

Savings on your power bill is only one of the financial advantages of using alternative energy sources.

“Saving money is one of the greatest advantages of using solar power,” says Dr. Barry Jacobson, owner of Solar Impact, the Gainesville-based company that installed Fratello’s solar system. “When you get your power from the sun, it’s basically free and you aren’t having to buy it, but what many people don’t know is that a solar power system increases the sales value of your home by more than what the system itself costs and homes that have solar systems sell faster than conventionally powered homes. So, you really end up saving and making money all the way around with solar power.”

Both Krebs and Fratello

have taken advantage of living in the Sunshine State. The sun is a daily source of virtually endless energy just waiting to be utilized, and the once-high costs of such residential systems are coming down so they are now affordable to more homeowners.

Jacobson says that a five-kilowatt system (most homes use five to 10 kilowatt systems) costs around $17,500, and the accompanying tax credits drop that price to $12,500. He says that this means most systems pay for themselves in savings within six to 10 years.

“I initially expected the alternative energy sources and energy-saving measures I used when building my home to pay for themselves in about eight years, but now I estimate that that time period will be closer to six years,” says Krebs.

According to Jacobson, the systems are environmentally friendly and very durable, ensuring savings for many years to come. He says the solar panels last anywhere from 30 to 40 years and the inverters usually last around 10 to 12 years, with the cost of replacing the inverters factored into the initial system cost.

Fratello’s 26-kilowatt portable system was installed last summer. The 2,500-square-foot array of panels is situated on a rack system that sits in a pasture adjacent to the family’s home. Fratello says that the only drawback to his system is the fact that he chose not to go with a backup battery storage system. This means that if his utility supplier has an outage when his solar system isn’t actively producing electricity (such as during the night), he will be without power just like his neighbors who don’t use solar power systems.

Jacobson says backup systems are available but aren’t necessarily cost-effective and require quite a bit of maintenance. He says that the technology is changing and that the company will soon offer the “Tesla Powerwall,” a large, powerful, long-lasting lithium-ion battery system that requires minimal maintenance.

Fratello paid $90,000 for his larger-than-normal solar system, and Krebs paid a total of $42,000 for his 10-kilowatt solar system and his geothermal heating and cooling system. Both men received a 30 percent federal tax credit, reducing those costs by approximately one-third.

Energy tax credits cover the cost of site preparation, installation and connecting the system to the home. If the credit exceeds the homeowner’s tax liability for the year, it will be carried over to the following year rolling over until the full amount has been utilized. Jacobson says the federal tax credit law is set to expire in December 2016, but that the industry expects the federal government to extend it for several more years as the expiration date nears.

Is solar for everyone, and is it a project for ambitious do-it-yourselfers?

“With the tax credits available, the overall financial savings you attain and the efficiency and environmental cleanliness of a solar power system, it is really a fantastic way for anyone to power their home or business,” says Jacobson. “But I do advise anyone interested in a solar system to consult a professional installer. They will come out and evaluate your home so the system will perfectly fit your particular needs. Although the systems aren’t really complicated, they do require some construction and wiring knowledge. It can be done by a do-it-yourselfer, but it isn’t something I would suggest.”

Krebs, who is a retired University of Florida professor who has degrees in math and physics, says solar power systems are getting better… and cheaper… year by year.

“I’ve had my system since 2012, and it’s even cheaper to purchase now than it was then. Researchers are also experimenting with a substance called graphene that will hopefully make solar cells capable of producing much more power than today’s standard silicon cells, and that will also be much, much cheaper to buy. I wish I could convince everyone to use solar energy to power their homes. I am a scientist and a firm believer in climate change theory, and I believe we each need to do our part to reduce the use of carbon-emitting energy sources.”

The only thing as natural as using the sun to provide energy for your home is using the Earth to do the same thing.

According to Kitzmiller, Florida’s soil temperature is between 70 and 72 degrees when you dig down at least 2 feet into the ground. This temperature remains constant throughout the year, thus enabling the soil to be a natural heat exchanger.

He explains that in a geothermal system, polyethylene pipes are buried in the ground, in our area usually 6 to 12 feet below grade. Water is circulated through the pipes using a low-wattage pump and returned to a heat pump unit located inside the home. In the winter, heat stored in the ground is absorbed into the water through the piping and delivered into the house via the indoor unit. A fan then circulates the heat throughout the home’s ducting system. In summer, the heat in the house is pulled into the system and carried into the piping where it is then absorbed into the cooler soil. It is the same principle used in air-source heat pump systems but is much more efficient and cost-effective.

The system used in Kreb’s home has a double-layered field of pipes buried under approximately 2 acres of land.

“The pump circulating the water through the piping in my system is only a one-watt pump, and the inside unit is in a closet in my sunroom,” Krebs adds. “The heat from the running of the pump is used to heat the water for my home so that nothing is wasted. I am very pleased with my system, and it has met all my expectations.”

Kitzmiller says a geothermal system can produce water heated to approximately 120 degrees and can provide all the hot water needed in many homes.

Why would anyone want to live off the grid? Although it can be simply to save money, most persons choosing alternative energy sources have deeper motivations.

“I want to be a good steward of this Earth,” says Krebs. “I firmly believe we have to reduce our carbon footprint while we are here. When it comes to my home, I have a zero carbon footprint, and I wish it could be that way for everyone. We only have one Earth, and it is ours to watch over and protect.”