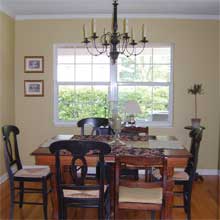 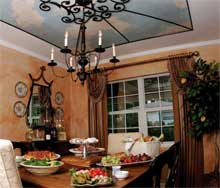 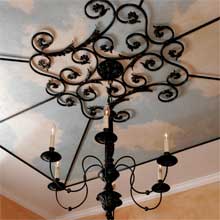 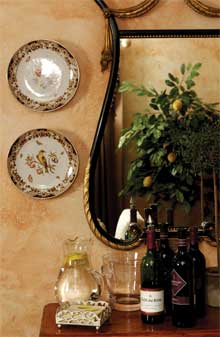 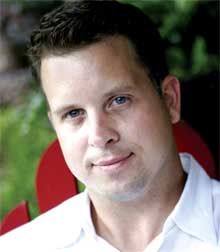 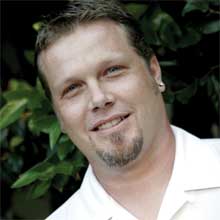 As a designer determining a look for an uninspired space, Richard makes it a point to play off the other rooms in the house.

According to Richard, the problem with the Ross’ dining room was the small size and the lack of a theme. To give the room character, Richard began by adding beautiful silk draperies.

“I couldn’t decide if I liked the shiny or the dull side of the material,” Barb says. “So Richard had the idea to use both.”

“We got the fabric down to 18-inch strips and sewed it back together so we could alternate between the shiny and dull sides,” Richard says. “We also added two-inch rods to mimic the black and gold wash of the chandelier and embellished the drapes with a tassel fringe.”

To see one of the highlights of the space, guests need only look up. A maze of wrought iron (or so it seems) twists and turns showcasing the Ross’ elegant but simple chandelier.

“Barb had a metal art piece hanging on the wall so we drilled a hole through it to make it a part of the chandelier,” Richard says.

Only they then took it one step further. Using wooden dowels painted with several coats of high gloss black paint, Beaver Bryant of Bryant Wallcoverings and Paintings created a spoke-like design on the ceiling that both enlarged and embellished the existing wrought iron artwork. The one-of-a-kind piece of ceiling art has already become quite a conversation piece.

“To further add interest to the ceiling and to make the room look bigger, I added a faux sky beneath the ironwork,” Beaver says. “I do a lot of skies, but I wanted this one to look different so I did an antique shimmer on top of it. Admittedly, it’s hard to explain my process sometimes. I’ve just always been creative and enjoyed art.”

“I didn’t really give Beaver any direction on the ceiling as far as what types of materials to use,” Richard adds. “That’s one of the great things about Beaver. He knows what I expect and he not only gets it done, he exceeds my expectations.”

“I never would have thought to do something like that to the ceiling,” Barb says. “But for Richard, who is so creative, it just came naturally. He really is wonderful to work with.”

Straight From The Designer

• If you want to add drama to a room, you should do it to the two most used rooms in the home — the master bedroom and the dining room.

• Think about window treatments differently. Don’t be afraid to be creative and experiment with different fabrics.

• Keep it simple. Too many people put everything out on display. Let people have the opportunity to walk around and check things out for themselves.

• The smaller the room, the more color you can use.