When the 2014 Winter Olympics begin in Sochi, Russia, next month, two Ocala natives hope to be among the athletes proudly representing the United States of America. In a town known for its equestrian pursuits, the two Ocalans hoping to carry the colors of the United States don’t have anything to do with horses. For Caydee Denney and Brittany Bowe, competition is all about the ice. Although at press time it wasn’t possible to know with certainty which athletes would make the U.S. Team, both Caydee and Brittany were likely contenders. Here’s a closer look at these talented athletes so you’ll know them a bit better when you tune in to cheer for the red, white and blue. 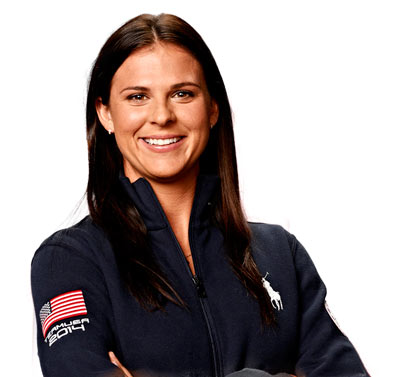 In many ways, the old saying, “Don’t change horses in midstream” makes good sense. Why switch things up when they’re going well? But if Brittany Bowe, 25, hadn’t “changed horses,” she wouldn’t be on her way to the Olympics.

For 12 years, Brittany (nickname: “BBowe”) was a die-hard inline skater… and a darn good one at that. Born and raised in Summerfield, she graduated from Trinity Catholic High School in 2006. She was just 8 years old when she went to a friend’s birthday party at Skate Mania in Ocala. Afterward, a speedskating team was practicing; the coach thought Brittany had potential and invited her to one of their practices. From that serendipitous beginning, the young athlete skated her way to 32 World Championship medals (2002 through 2008) and three Pan American gold medals (2007) in the world of inline skating.

Unfortunately, inline skating is not an Olympic sport, and Brittany has wanted to be an Olympian for as long as she can remember.

“I went to college at Florida Atlantic University and played basketball all four years. When I graduated in 2010, I was thinking I’d be picked up by a professional team, probably overseas,” she says. “But when I was watching the 2010 Winter Olympics, I saw some of my inline skating friends who’d made the transition to ice. They were walking in the opening ceremonies, and I knew I wanted to do the same.” 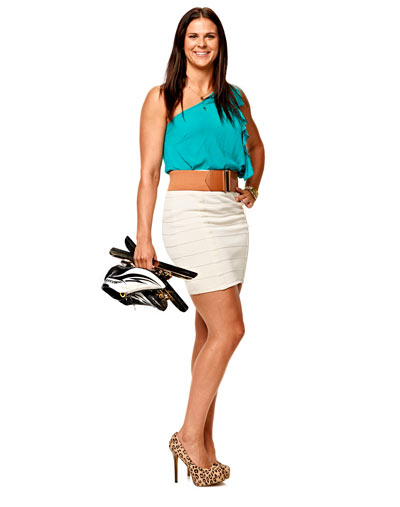 If she had any hopes of making her Olympic dreams possible, Brittany realized it was time to ditch her inline skates for a pair of ice skates. That same year, this disciplined athlete, who’d never donned a pair of pro ice skates, moved to Salt Lake City and signed on for the “Wheels to Ice” program sponsored by the U.S. Olympic Committee. The program puts inline skaters through a rigorous 18-month trial period to see if they can master the switch over to ice.

“Having been on skates for 12 years of my life definitely helped the transition over to the ice. There are a lot of similarities in the basic movements and motions, but the technical aspects are very different. I’d underestimated how technical ice skating can be,” notes Brittany. “When you’re skating on wheels, you’re on top of the surface, whereas with ice, your blade is actually cutting into the surface. On ice, the pressure you’re putting down with each push is very vital to going fast.”

And make no mistake, Brittany is fast. She’s currently ranked second in the world in the 1,000 meter and is a three-time World Cup medalist at that distance. Brittany’s most memorable speedskating accomplishment to date was winning her first World Cup gold medal and setting a new track record in the 1,000 meter, which she did in Erfurt, Germany, in March 2013.

“This past year was really good for me,” says Brittany. “I progressed very quickly and found myself at the top of the podium at the end of the year. That was definitely the most fulfilling thing for me since I’ve been on the ice.”

Although she’s known for her sprinting abilities, Brittany also competes at the 1,500 meter distance.

“It’s one of—if not the—hardest races on ice because it’s such a combination of speed and endurance,” she says. “You’re skating 1,500 meters in under two minutes; you’re going as hard as you can.”

Former U.S. Olympian Apolo Ohno made speedskating fans of many spectators, but he skated short track, while Brittany skates long track. The difference? In short track, contestants race in a “pack” style, whereas in long track, each skater has his or her own lane and skates against the clock going for the fastest time.

“Long track is basically time trials,” says Brittany, adding that she does get nervous before competition, but in a good way. “I think it works in my favor; those nerves are positive energy. If you’re too relaxed, you won’t be ready to go.”

When competing, long skaters wear an aerodynamic suit but no helmet.

“The fact that I have razor sharp blades attached to my feet and I’m going 30mph-plus still kind of freaks me out if I think about it,” laughs Brittany. She adds that those skates are quite pricey.

Brittany’s father, mother and younger sister still live in Ocala, and she enjoys coming back to visit, although April is the only month she has off from training and competing.

“Giving up time with my family has been the hardest thing for me,” Brittany admits. “Not being there to see my sister go through high school has been hard.”

It will all be worth it if she makes the Olympics. And, because long track speedskaters are still often competing at the highest levels into their mid-30s, Brittany, who turns 26 this February, could realistically make it to the 23rd Winter Games in 2018. As competitive as she is, Brittany has other goals, as well.

“I’ve joined a charity organization called Right to Play, which helps children in a number of countries become empowered and inspired through play,” she says. “One of my goals after the Games is to get out and have a firsthand look at what’s going on on the other side of the world and see how I can help. I want to use skating as a platform to give back and help others.” 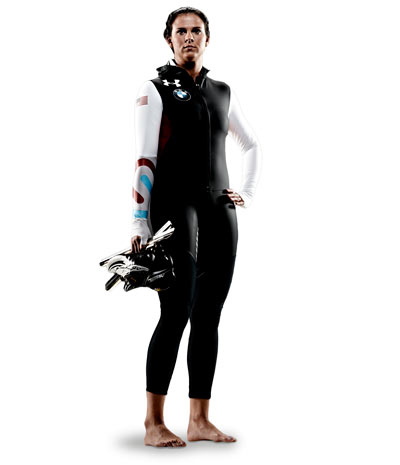 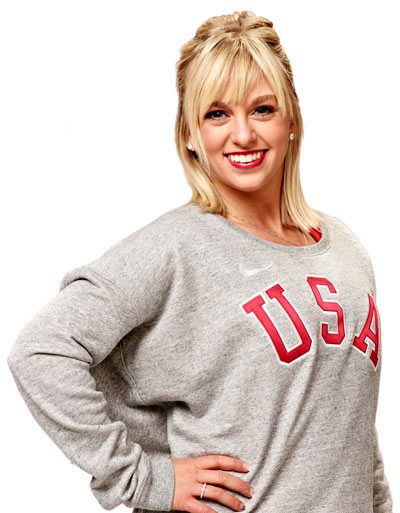 Some dreams start early. For Caydee Denney, her Olympic goals took root when she was barely in elementary school after watching figure skater Tara Lipinski win Olympic gold in the 1998 Winter Games.

Born and raised in Ocala, Caydee (nickname: Dory, as in Finding Nemo) started out roller skating, which was only natural as her parents, Bryan and Dee Dee Denney, were national and world champion roller skaters. The roller rink was literally Caydee’s playpen.

“Both my parents taught at Skate Mania. I started skating as soon as I could walk,” recalls Caydee, 20, who was homeschooled and finished her high school studies in 2012.

Caydee won the 2002 national juvenile roller and elementary pairs roller national championships and was named Southern Region Artistic Roller Skater of the Year. Despite her success, she craved more than roller skating could offer and never forgot the image of Lipinski winning a gold medal at the age of 15, the youngest individual gold medalist in the history of the Winter Games.

“Ice skating is a bigger competitive world. It offers the chance to travel internationally, and it’s an Olympic sport. That’s what motivated me to switch to ice,” says Caydee, who started skating singles but changed to pairs at age 15.

Amazingly, a year later at just 16, Caydee and her then-partner Jeremy Barrett made the U.S. Team and competed at the 2010 Winter Olympics in Vancouver, where they finished 13th.

“I enjoyed every moment, and it was a really good experience being at the Olympic Games,” she says. “I was one of the youngest U.S. competitors.” 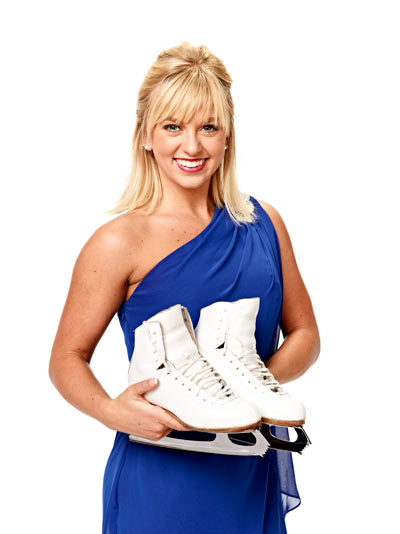 Caydee’s younger sister, Haven, competes with partner Brandon Frazier, with whom she won the 2012 U.S. junior title. It was in Colorado Springs, after Caydee moved there to support Haven’s skating goals, that Caydee met her current partner, John Coughlin, who had taken time off from the sport after the death of his mother. Neither John nor Caydee were skating competitively at the time, but it didn’t take long to realize they both still had the drive and desire.

Their first competition together was in the summer of 2011; they were U.S. champions in 2012 and won silver at the 2012 Four Continents Championships.

The duo won’t know if they’ve made the U.S. Team for the Sochi Games until the U.S. Figure Skating Championships this month.

“We’ve had strong showings at all our events this year and feel that our experience will help us,” says John. “At this point, there are at least a half dozen pairs that have a legitimate chance of making the team, but only two can make it.”

“If we go to the Olympics, our goal is to help the United States bring home a medal,” adds Caydee.

Although women’s singles figure skaters have a relatively short window of opportunity to compete at the highest levels, pairs skaters have a much longer competitive lifespan.

“Caydee and I are in our prime now,” says John, 27. “Many of the top competitors in pairs are similar in age to us, if not older. There’s an exciting new team event in figure skating, which is similar to that in gymnastics, in that they name an individual champion and team champion; it’s another opportunity for skaters at the Olympic level.”

Caydee does get nervous when skating at an event, but that doesn’t hold her back.

“It’s nerves and positive adrenaline that give me energy,” she says.

Competing at this level involves dedication and sacrifice… and not just for those in the limelight.

“Skating is an expensive sport; you need your family’s support to make it happen and having that support is a big thing,” says John.

“Being able to go after these dreams has meant a lot of sacrifice by my family,” says Caydee. “My parents moved to Coral Springs when my sister, Haven, was training there, but my grandfather, Frank Deluca (owner of Deluca Toyota in Ocala), is still in Ocala and has been to so many of my events.”

Both Caydee and John love the international travel that comes with their sport. Japan is one of their favorites places to compete.

“We really enjoy our fan base there,” says John. “Skating over there is almost like football is here. Plus, we’re both big sushi eaters!”

All About The Olympics

The 22nd Olympic Winter Games take place February 7 through 23. Although the Opening Ceremonies are held on February 7, official competition begins on February 6. You can catch the action during primetime on NBC. For a complete rundown of 2014 Winter Olympics schedules, athletes and more, visit NBCOlympics.com or TeamUSA.org. You can also follow Brittany, Caydee and John on Facebook and Twitter!