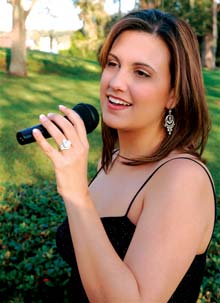 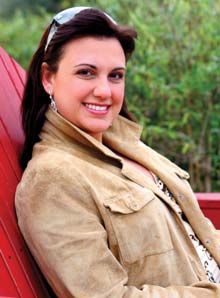 Soprano Mary Jo Vitale personifies the root meaning of her surname in music and more. Vitale translates as “full of life.” This vivacious, raven-haired vocalist is attracting loyal followers in The Villages where she sings three nights a week at GarVino’s in Lake Sumter Landing.

“The response is overwhelming,” says Mary Jo. “My family and I were customers at the wine shop. My parents told the owners, Gary and Sandee Bonnie, that I sing. No one had any idea that live entertainment in their newly created wine bar would be this popular.”

A regular group of patrons enjoy the former Disney singer’s eclectic repertoire, and her new fans often express their surprise to find such a talented performer in a small, out-of-the-way location.

“The question I get most often,” says Mary Jo, “is like the lyric from Billy Joel’s ‘Piano Man’: ‘What are you doing here?’”

She answers sincerely, “I’m doing exactly what I love to do every day.”

Her loved ones add to the spirited ambience. Her parents, Perry and Rosalie, and husband Jon-Marc MacLean, never miss her performances. Song selections include genres as broad as her vocal range—Broadway, opera, and popular standards. She also enjoys cheerful repartee with patrons.

“I love getting involved with the audience,” says Mary Jo. “I don’t make a set list. I prefer to read people’s expressions. I gear the music to how they’re responding and go song by song.”

She also pays attention glass by glass, doing double-duty as a server.

“I notice what customers need while I’m singing,” she says. “I want to make sure I’m doing that part of my job properly.”

Though she plays piano and flute, the accompaniment tracks allow her to be up front and not behind any instrument.

“I was fifteen when I began vocal training,” she says. “A high school teacher arranged for an audition at the University of South Florida’s Music Department, where I was offered a full scholarship.”

The Pinellas Opera League also awarded her a scholarship and she learned a broad scope of music while she performed extensively. She also broadened her education.

She attributes her work ethic to her family. Her father is a psychologist and her husband earned a master’s degree in counseling psychology.

“Music brings people back to a time and place,” she says. “It makes me happy if I aid in healing someone in some way. If someone looks unhappy, I sing to them until they smile.”

It’s also therapeutic from her side of the spotlight.

“If I couldn’t sing, I’d explode. I don’t go a day without singing,” she explains. “My family is musical. We were like the Partridge Family growing up.”

However, she’s not new to this kind of venue. Mary Jo previously performed at Epcot’s Candlelight Processional at America Gardens Theatre for three years, and she sang at Bergamo’s Wine Bar in Orlando.

“I loved the Candlelight show as a teenager,” Mary Jo reminisces. “I wanted that for a long time. I’ve never missed a performance.”

That tenacious exuberance keeps her in pursuit of goals without compromising her style or family values.

“I’d love to be a recording artist,” she says, “but my husband’s job keeps us stationary.”

Her co-workers have become an extended family. Fellow server Brandy Ortengren drops by to talk with Mary Jo.

“I think she’s awesome,” Brandy says. “I didn’t know anything about Broadway, classical, or jazz. We’ve learned the songs and sing them back to her at the end of the night while we’re cleaning up. Especially the opera!”

Mary Jo jokes that they call themselves the Garvino Family.

“We’re close as family,” she explains. “I want everyone to be happy and enjoy what’s going on around them here. There’s a little bit of me in every song.”