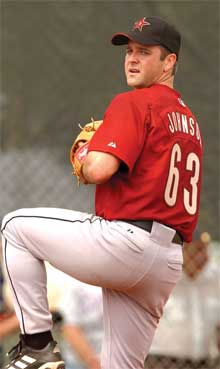 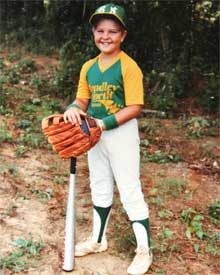 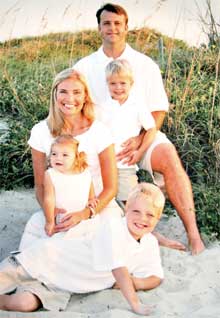 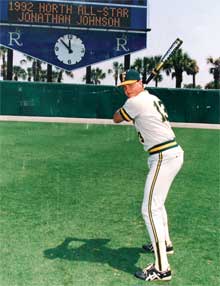 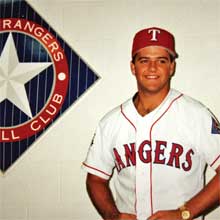 While the coming of spring signals rebirth, it also marks the start of America’s national pastime and its signature sounds — the crack of the wood bats making contact, the pop of the catcher’s mitt, and the “you’re out” call by the umpires in blue.

This spring has signaled the unexpected return of former Forest baseball pitching standout Jonathan Johnson, who’s living out a boyhood dream of playing for the Atlanta Braves, which seemed lost forever when Jonathan retired three years ago after a frustrating season with the Houston Astros that was punctuated by a brutal start in Fenway Park. He surrendered eight walks in just three innings against the Red Sox.

“Going back home was tough, but success was not coming,” Jonathan says. “The breaks weren’t going my way.”

In 2003 and after nine non-descript seasons of being shuttled between Triple-A and the big leagues with three different ball clubs, Jonathan walked away from the game he loved. His focus shifted to family, his fledgling real estate development company, and Honoring the Father (HTF), the Ocala-based non-profit organization he helped start.

Over the last seven years, Jonathan and his HTF teams have supplied 52 Christian baseball clubs in Cuba with professional equipment. They travel across the island throughout the year — often on foot — playing games and sharing the Gospel. He always returns home to Central Florida feeling fulfilled.

Jonathan’s ties to Ocala began when his family moved here from Tennessee 19 years ago. By the time he arrived on the Forest campus, coaches there had already built him up to legendary status. Teammates dubbed Jonathan “Tennessee” before his arrival. When a pudgy 5-feet-5, 155-pound Jonathan arrived at practice, teammates erupted in laughter. After all, the way coaches had raved about him, they expected a hulking 6-foot-plus young man.

As he grew taller, Jonathan’s career on the mound began to take shape. He attracted the attention of Florida State University at a camp the summer before his senior season. In his first start as a senior, his fastball was clocked at 93 mph, and the Seminoles offered a scholarship. Jonathan’s storied college career included leading the Seminoles to their first ACC Championship.

Then The Show called.

The Texas Rangers selected him with the 7th overall pick in the 1995 Major League Baseball draft and put him on the fast track. He reached AAA in just one year, but never quite made the major leagues his permanent home.

Jonathan’s journey back to the game is a testament to the old adage that life’s circumstances ultimately can work together for a reason. After almost four years away from the game, Jonathan defied conventional wisdom that the final chapter of his baseball career was already written.

An incredible string of events began a year ago when Jonathan convinced his former teammate and current agent, T.R. Lewis, that he was in shape and ready to get in front of some teams for a workout.

At a former teammate’s indoor facility in Columbia, S.C., a friend registered Jonathan’s first pitch at 94 mph. He topped out at 97 mph that night. Jonathan then threw for Clemson pitching coach Kevin O’Sullivan.

The very next day, O’Sullivan flew to Orlando to recruit a high school star. Not so coincidentally, T.R.’s boss was in attendance, as was a former teammate of Jonathan’s, Andy Barkett, who served as a roving instructor in the Atlanta Braves’ minor league system. Jonathan’s name came up, and Andy said he would make some inquiries.

One of those calls went to Chino Cadahia, the current Braves bench coach who was a Minor League coordinator at the time. Cadahia, not surprisingly, knew Jonathan from their mutual time with the Rangers.

“A lot of people say it’s coincidental that so many people I knew came together that quickly,” Jonathan said. “To me, you can only say coincidence so many times — it’s absolutely miraculous.”

A day before Jonathan left for Cuba on another mission trip, the Braves informed T.R. they weren’t interested. Jonathan’s agent didn’t have the heart to give him a call, and while in Cuba he threw over a hundred pitches on consecutive days to Cuban players who were thrilled to face a former big leaguer.

Jonathan returned to the U.S. to a surprising phone call from the Braves. They wanted him in Jacksonville the next day for a tryout. He coached his son’s Little League game that night and then rushed to Jacksonville for his audition.

“I felt like I had wasted their time,” Jonathan recalls.

But the Braves must have seen something different, though, because a contract was waiting for him when he got home. Jonathan threw a couple of two-inning stints in simulated games before being thrown into the fire with the Braves’ AAA Club in Richmond. A multitude of injuries had sped up the Braves’ plans for Jonathan.

“I don’t know how the story will end, but I know there was a purpose for me,” says Jonathan. “I truly feel there is a greater story here to come.”

At a recent game against the Astros, the last team he suited up for, Jonathan worked two innings with an impressive fastball topping out at 96 mph. He also flashed a biting curveball and an occasional changeup. Jonathan believes the time off has done more than give him a fresh arm.

“I’m a better pitcher now than I was before,” he says. “I consolidated my mechanics. I hold my hands higher, which has given me a more consistent release point. It’s helped my changeup and given me better sink on my fastball.”

Whether or not Jonathan makes the Braves’ opening day roster, his amazing journey back to baseball has given him a fresh perspective. He now knows his life’s success isn’t tied to a major league diamond.

“I don’t know if I’ll make the club, but I have a tremendous peace about it,” he says. “I thought baseball was my purpose in life, but when I see the fruit from the work we’ve done in Cuba and the changed lives there, I realize that everything I achieved through baseball was for a much higher purpose.”