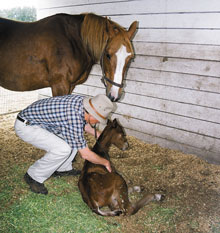 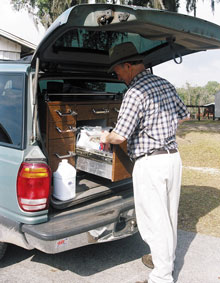 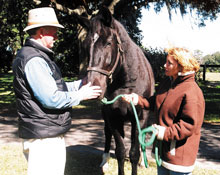 Career choices. It’s a bit like the adage, “Which came first, the chicken or the egg?” Do people gravitate towards a profession because it appeals to them, or do they succeed in a chosen career because it’s what they were born to do?

Spend just a brief time with Dr. Steven Murphy, an Ocala area equine veterinarian for 25 years, and it’s immediately apparent the man is doing what he was meant to do. He’s a problem solver who loves horses, and finding solutions to problems is the essence of what an equine veterinarian does every day.

Born and raised in Maryland, in his early teens he met Teresa, the girl who would later become his wife. Not having been raised in a horsy family, his first real contact with horses was Teresa’s half-Arab mare, Honey.

“Honey was street smart with an attitude. She loved carrots and tolerated me,” he recalls. “I learned a lot from her.” A colic episode with Honey prompted him to study veterinary medicine. The little chestnut mare was also the first horse he ever held for euthanasia, “the hardest, yet most important task for any veterinarian to perform,” he says today.

Today, Dr. Murphy refers to himself as a “dinosaur.” That is to say, he’s a mobile, male practitioner with no association to a specific practice or hospital. Ocala is one of the few areas where such dinosaurs are successful. Horse owners tend to get spoiled in a place like Marion County because of the abundance of all things equine. Price competition is strong, especially for self-employed veterinarians who typically undervalue their services.

“Everything you need for horses is here in Ocala,” says Dr. Murphy, “and it’s less expensive than in any other high horse population area, such as Lexington, or Middleburg, [Virginia], or California.”

At six feet tall with direct blue eyes, Dr. Murphy has a smile that makes you think he knows an especially good story and, if you’re lucky, that he might share it. He possesses an abundance of energy and enthusiasm and is an astute listener, a valuable trait to have in his occupation. (He is also one of the few people who can outtalk this writer, a feat in itself.) His standard work uniform is khakis and a button-down shirt, often denim, (if it’s cold, a down vest), and his trademark “city Stetson,” a tan felt hat reminiscent of Clark Gable.

For a mobile veterinarian, getting where you need to be is half the job. Dr. Murphy’s current practice vehicle is a ‘98 Ford Explorer, his third to date. His last Explorer logged over 300,000 miles, two engines and two rebuilt transmissions before he retired it. A committed Ford man, he drove an F-250 diesel truck before the Explorers. (After 250,000 miles, he wore out the body — not the engine — on that one.)

On a typical day, Dr. Murphy drives approximately 100 to 125 miles, often more, with a majority of calls falling in the “north of Hwy 40” area of Marion County. He averages 55,000 to 60,000 miles a year and, for the record, he wears his seatbelt religiously. With most work days averaging 11 to 12 hours, at least two hours or more are spent behind the wheel, much of it on two-lane county roads in all types of weather. Fortunately, Dr. Murphy loves to drive.

Although he does plenty of routine equine health care, much of Dr. Murphy’s practice is devoted to reproduction, pediatrics and lameness. About 60% is reproductive work and a majority of that is with Thoroughbreds. Performance horses of all breeds account for the other 40% of his practice work.

When working with horses, especially those that may be upset or in pain, one must always keep in mind that this is an animal capable of killing or severely injuring you, Dr. Murphy notes philosophically. Mind you, this is not something he dwells on. One of the main hazards of his occupation is getting kicked and, over the years, his worst injuries have been the result of just that. Ironically, the time he suffered a kick to the head that fractured his sinus wasn’t the most damaging. Instead, it was a kick in the kneecap that required a tendon transplant and two titanium screws and left him with a slight gimp.

There is no such thing as a “normal” day for a mobile equine veterinarian. The only thing that could be defined as normal is that no two days are ever the same.

“You never know what the next case is going to be and how long it’s going to take,” says Dr. Murphy. Appropriately, one of his main philosophies is, “Do the work you need to do and take the time it takes to do it.” He admits there are plenty of occasions where he wishes he could be three people.

January is the start of foaling season, but mares aren’t being bred until February. The longest days tend to fall in breeding season (mid-February through June) and involve checking mares, attending to foals, and filling in the space with other calls. Summer months are devoted to routine health maintenance, and fall means sales horses and the “snowbird effect” with an influx of performance horses. Lameness can be an issue with any breed at any time of year. Solving the puzzle, treating the problem, and getting the horse sound again are challenges he relishes.

Although he’s had an assistant in the past, Dr. Murphy doesn’t currently have one, so there was an empty seat in the Explorer, just enough room for this writer to tag along and experience first-hand what’s involved in a “typical” day.

For someone who routinely works 11 to 12 hours a day, there is little time to devote to hobbies. Dr. Murphy enjoys the mental break of snow skiing, but it’s been two years since his last outing. “I hate to admit it, but I’m a bit of a computer geek,” he confesses. “Every day I check the email list for the Equine Clinician’s Network where vets from around the world post questions and answers on cases.”

Dr. Murphy finds the business aspect, including billing and collection, the least enjoyable part of his job. “Treating the animals is the fun part,” he adds, the part that he never wants to see change. In spite of (or perhaps more accurately, because of) the many foals he is responsible for bringing into this world, “the miracle and wonder of birth” is something he never tires of witnessing. As he puts it, “The absolute best thing is to get a good mare in foal [that], for whatever reason, had difficulty conceiving, and then actually being there when she foals.”

After so many years in the veterinary profession, education and instinct overlap when it comes to diagnosing and treating his equine patients. He remains both pragmatic and optimistic. “You can’t know everything, you can’t do everything and you can’t always be the hero,” says Dr. Murphy. “But you always do what’s best for the horse. By doing this you can live with yourself and you can always justify what you’ve done.”

His dream job? That’s simple. “To win the lottery and do all this as a hobby,” he says, with that affable Irish grin.

A Day in the Life of Dr. Steven Murphy

7:00am Paperwork at home; feeding his own horses.

8:30am Herd vaccinations (West Nile and “four-way,” which is Eastern &Western Encephalitis/ Influenza/Tetanus) for 19 horses at one farm; palpate three mares and culture two others at the same farm

10:00am Draw blood from a newborn foal for an IGG test, which checks to see if the foal has received enough antibodies from the mare’s colostrum; palpate an overdue Thoroughbred mare to check the position of her unborn foal.

10:40am Drop off medication at a farm and recheck a maiden mare that foaled days earlier.

11:15am Recheck a yearling whose chest had to be sutured three days earlier after the horse ran through a fence. Sutures look good and there is remarkably little swelling. Filly is in good spirits. Write out a health certificate for a racehorse shipping to Philadelphia Park.

11:50am Check on a mare that aborted the night before. The mare is treated and is in good health, despite the abortion. Upon examining the placenta and the dead eight-month-old fetus, which was small for its age, a tiny twin the size of a small puppy is found. This second, far-less-developed twin was interfering with the development of the bigger fetus so that both were lost. The mare’s owner is dismayed that ultrasound didn’t pick up the presence of twins when the mare was checked at the out-of-state farm where she was bred. (Although twins are not typically a problem in humans, they are NOT desirable with horses. When detected in the earliest stages of pregnancy, one twin is typically “pinched” so the mare will just have one foal.)

12:45pm Conduct a progress exam on an upper airway treatment of a yearling. Examine with scope and tell owner to continue antibiotic therapy.

1:25pm Drop off blood from newborn foal to Jackie at the diagnostic lab.

1:30pm To Whispering Winds Farm to vaccinate a mare for rhinopneumonitis/influenza and recheck bump on her leg.

2:15pm Check on a mare that foaled yesterday. Vaccinated two other mares due to foal within the next 30 days or so. Conduct a lameness exam on a two-year-old in training who is exhibiting a subtle lameness in his right front leg. Determine that there was inflammation of the check ligament and inject an anti-inflammatory medication.

4:15pm The x-ray machine is no sooner put back in the Explorer than the phone rang and it’s the farm with the overdue Thoroughbred mare we had checked this morning. A foal is on the way! After a quick test of the speed limit up Highway 27, Dr. Murphy arrives in time to help deliver a very large colt that was out as far as his shoulders, but not going any further without some assistance. It is a simple matter of relieving the “shoulder lock” by pulling on the leg that was back and, moments later, the foal is on the ground, healthy and in good shape.

4:45pm On to Cinema Farm to radiograph the knee of Axel, a big, handsome Hungarian Black gelding who has appeared in several movies. Unfortunately, another horse in the pasture kicked him in the knee and Axel is lame.

5:20pm Conduct a lameness exam on a Thoroughbred mare. Watch mare exercised on longe line at the walk, trot and canter. Determine soreness is in right front. Cut away pad from under shoe on right front hoof and diagnose infection in the frog (the fleshy, V-shaped area of the hoof). Remove diseased tissue and treat with a lemon-oil-based antiseptic product.

6:30pm Home for the day. Billing paperwork is done after dinner.