The Marjorie Harris Carr Cross Florida Greenway is a recreation and conservation gift from Mother Nature with an unexpected origin story. Open 365 days of the year, the Greenway offers hiking, biking and horseback riding trails, as well as plenty of opportunities for wildlife sightings.

The Marjorie Harris Carr Cross Florida Greenway was born from the well-intentioned but ill-conceived Cross Florida Ship Canal. Part of a federal relief program to create jobs during the Great Depression, the plan was to construct a deep-water ship canal cutting east-west across Florida. Construction actually began in 1935 and evolved into the Cross Florida Barge Canal before coming to a stop a year later. It resumed in 1964, was halted again in 1969 and was permanently decommissioned in 1971. Thanks to environmentalist efforts led by Micanopy biologist Marjorie Harris Carr, the barge canal construction never resumed again. 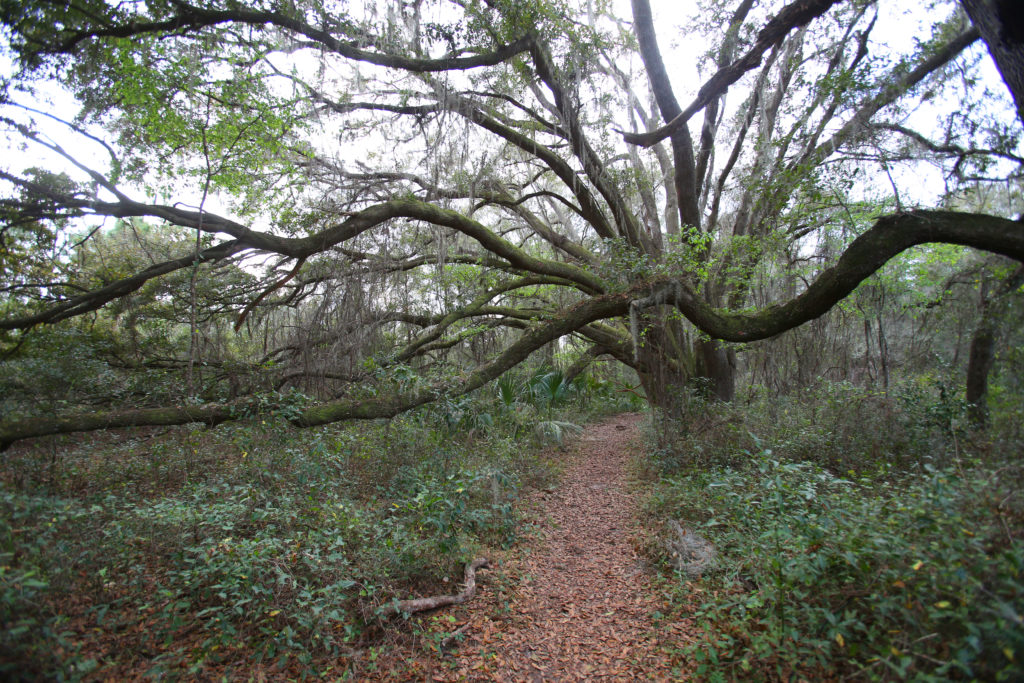 The most visible remnants of the Cross Florida Barge Canal project are the four towering concrete bridge stanchions on the U.S. Highway 441 median in Santos, just south of Ocala. Built in 1936, the bridge stanchions are now the centerpiece of The Island, a Florida Park Service interpretive historical park. Located directly behind the Marion County Sheriff’s Office substation on U.S. 441, the park is a median island featuring two hiking trails. Six kiosks and seven interpretive boards along a four-tenths of a mile trail provide historical information about the Cross Florida Barge Canal project.

Today, the Greenway is operated by the Florida Department of Environmental Protection, Office of Greenways & Trails,

and became a state park in 2012. This unique 110-mile nature corridor stretches from the Gulf of Mexico to the St. Johns River. The 30-mile plus Greenway section that runs through southern Marion County, from Ocala to Dunnellon, offers hiking, biking and horseback riding trails. Open free to the public, the trails are accessible dawn to dusk, 365 days a year.

“Combining the hiking, biking and horseback riding trails, there are more than 300 miles of trails in the Greenway,” says Bre Ximenes, the Cross Florida Greenway Trails & Volunteer Coordinator. “The forests of longleaf/sandhill pines and oaks provide plenty of shaded trails. And for the more adventurous, there are the canal diggings hills. The Greenway is home to a wide variety of wildlife. You might see deer, bobcats, coyotes, fox squirrels, gopher turtles, wild turkeys, owls, hawks, scrub jays and pileated woodpeckers. And there are black bears too.”

The Greenway also is a great place to observe the changing seasons, albeit the Florida version. The most significant change is spring, when the Greenway is resplendent in new neon green foliage and colorful wildflowers. Yellow jessamine, common green-eyes and yellow buttons attract butterflies, including the elusive tiger and zebra swallowtails. By summer, there’s a cloak of cooling forest green, accessorized by yellow showy rattlebox, lavender climbing butterfly pea and yellow partridge pea. By late fall, the trails are carpeted in golden leaves as the brown season of winter descends. But the short Florida winter soon gives way to the glorious spring, starting the cycle anew. 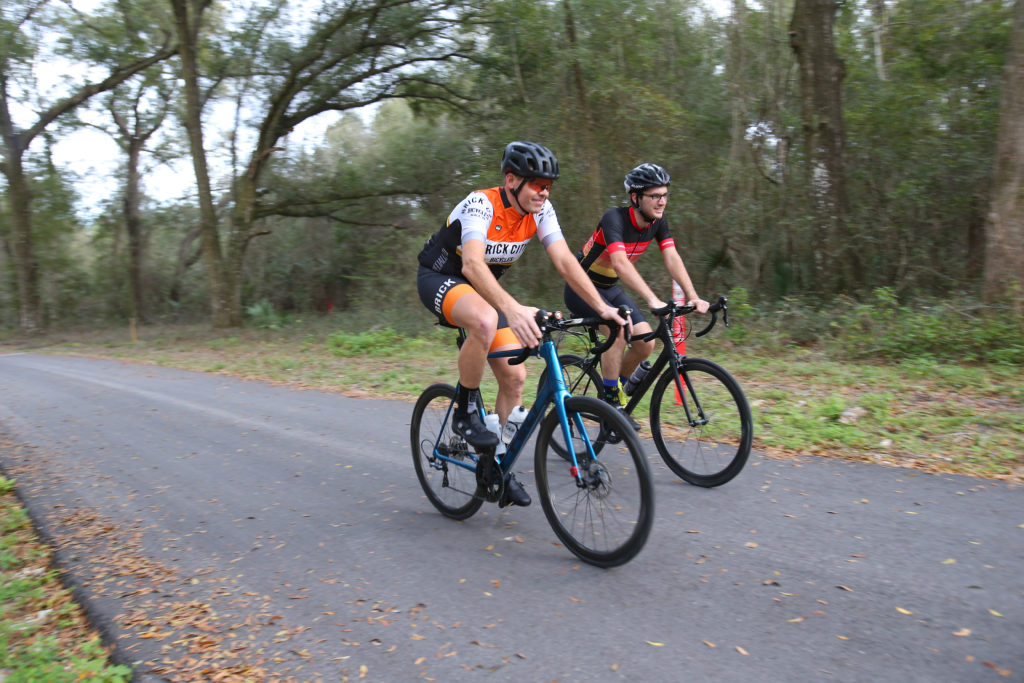 The Greenway hiking, biking and horseback riding trails system runs east to west and includes Santos, Land Bridge, 49th Avenue, Shangri-La, Ross Prairie and Pruitt trailheads. Campsites are available at Santos, Shangri-La and Ross Prairie trailheads. Underpasses on County Roads 475 and 475A, 49th Avenue, County Road 484 and the Land Bridge over I-75 ensure safe passage for humans and wildlife. Pets are allowed on leashes. No hunting or motorized vehicles are allowed in the Greenway.

“We are very fortunate to have the Greenway and we encourage everyone to come out and enjoy this wonderful gift of nature,” says Ximenes. “And we are always looking for volunteers to help us maintain the trails system. It’s a great way to give back and enjoy being out in nature.”

For hiking enthusiasts, approximately 30 miles of the 1,300-mile Florida National Scenic Trail cuts through the Greenway. Known simply as the Florida Trail (FT), it begins at the Gulf Islands National Seashore, south of Pensacola, and ends at the Big Cypress National Preserve, east of Naples. This trail is marked by orange blazes on the trees. There are also blue connector trails, marked by blue blazes on the trees, that go from/to Greenway trailheads and connect with the FT.

If biking is your interest, there are more than 85 miles of mountain biking trails for all ages and skill levels. There are flat and smooth trails, as well as the more challenging ones up hills and through lime rock quarries. Every March, the Ocala Mountain Bike Association (OMBA) hosts the Santos Fat Tire Festival (March 5th-8th this year), attracting trail biking enthusiasts from all over the country to ride the Greenway trails. In coordination with the Cross Florida Greenway (CFG) office, OMBA builds and maintains the mountain biking trails system. 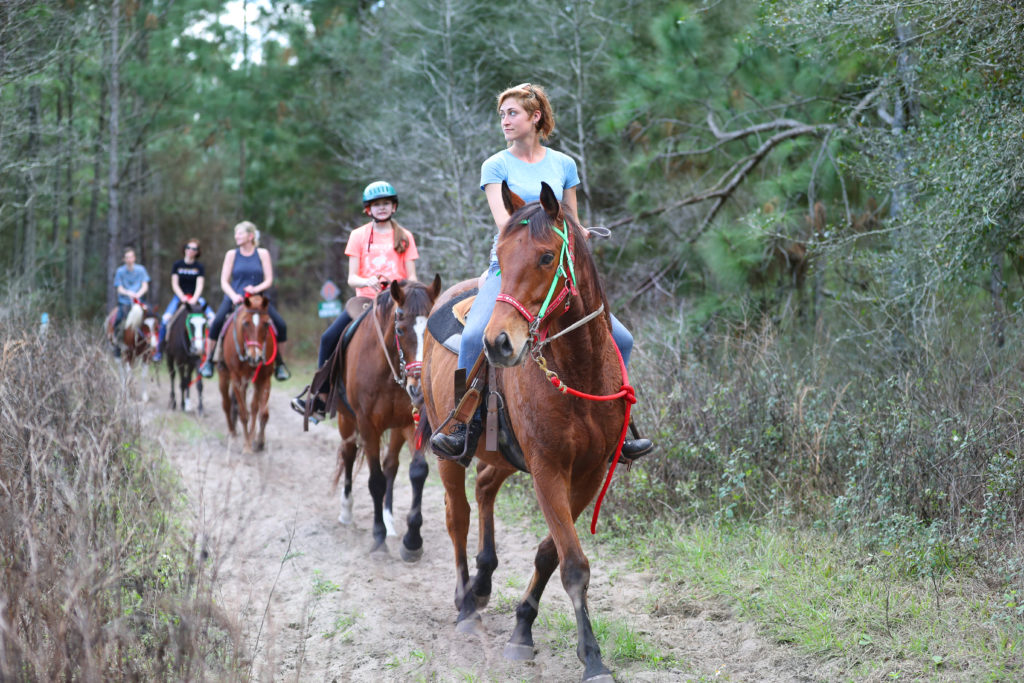 In 2017, a 16-mile, multi-use recreational paved trail opened in the Greenway, stretching east to west from the Santos Trailhead to east of State Road 200 in the Ross Prairie section. The paved trail is open to bikers, rollerbladers, skateboarders, hikers and dog walkers, but not motorized vehicles. To access the paved trail, go to the Santos, Land Bridge or 49th Avenue trailheads.

Equestrians can enjoy more than 85 miles of horseback riding trails winding through the Greenway. There is horse trailer parking and access to the trails at all the Greenway trailheads with the Land Bridge and Shangri-La being two favorites. In 2019, the 25th Avenue Trailhead was opened and is exclusively for horseback riders. The Greenway Equestrians, an all-volunteer riding group, works with the CFG to maintain the equestrian trails.