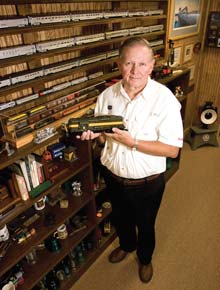 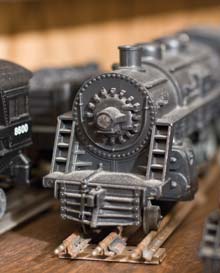 Not many people can boast of having a model railroad collection in their office, but Lake Panasoffkee attorney Randall Thornton can. He’s been building his collection for more than 30 years. There are shelves upon shelves of tiny HO scale model passenger and freight trains in his law office, plus a couple of larger O gauge diesel engines and cars.

But of greater interest is the real rail-road memorabilia Randall has added, including lanterns, a switch signal, passenger step stools, glass insulators, and hundreds of rail-road spikes. Then there are the coffee mugs, oil cans, switch signal locks, paper passes, even dining car sterling silverware and menus. Rounding out the impressive collection are prints and photographs of train engines and train stations.

But Randall doesn’t just collect memorabilia. A true aficionado, he loves to ride trains, too.

His enthusiasm for photographing every detail of his travels by rail has become a family joke of sorts.

There is little doubt that Randall’s interest in railroading is inherited. His father was a conductor for the railroad in Wildwood for 40 years, and he put himself through college working summers in the railroad’s signal department.

His collection started simply enough with pictures of trains, which he used in the décor of his first law office. From there, he graduated to actual railroad items, some of which were given to him by clients, others that he bought while attending antique railroad shows in Atlanta and Jacksonville. The bulk of his HO collection came from an estate sale. The purchase raised the number of pieces he now owns to 2,500, some of which are still boxed up.

In addition to collecting traditional HO model trains, Randall has acquired some non-traditional pieces over the years, like the five-piece wooden freight train set on wooden tracks that extend along the top of the bookcase that holds his law books. As a preservation move, he spray-painted it with varnish and then as a joke stuck a Seaboard Railroad sticker on the side of the engine.

Also residing on the same shelf is a beautifully handcrafted wooden steam engine that came from a Lake Panasoffkee man. Randall says the gentleman told him he could put it on display but that he might eventually want it back. That, he laughs, was 15 years ago.

Despite his extensive collection, Randall doesn’t consider himself a true collector. He doesn’t search the Internet and doesn’t do much trading. When he finds time to attend antique railroad shows, he remains selective about his purchases.

Randall is also more intrigued by the engines than the cars, and he is content just to display his trains on shelves, not run them around in a circle or in a model train layout. He does, however, check his engines on a strip of track tacked to a length of board to see that they are in working order.

When asked about the decline of railroads in America, Randall waxes nostalgic about that bygone era when communities and cities throughout Florida were linked by rail.

As for passenger rail, Randall sees little future for it.

“We’ll never be a country again where people take long-distance trains to get from one place to another,” he says. “It’s so easy to get in the car or jump on an airplane.”

But he does see a future in commuter trains, like those running in the northeast corridor between Washington, D.C., and Boston. Those, he says, will always be valuable.

When it comes to his personal office collection, Randall has no problem with folks dropping by to view it.