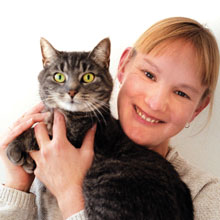 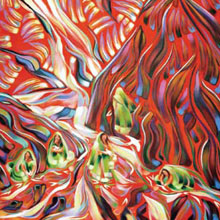 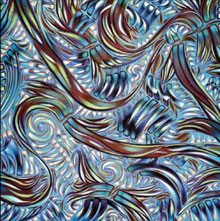 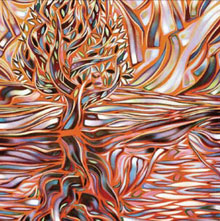 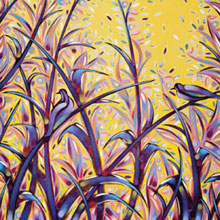 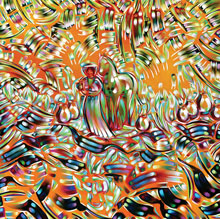 Sandra de Nijs believes in magic—the kind of artistic magic that comes from putting a brush to canvas. That ethereal essence is a part of her acrylic paintings, which are dominated by abstract expressionism.

“When you see my art, it’s like going on vacation,” she says in her quiet way. “It’s warm, dreamlike, open, and it invites you to stay a while and challenge your senses.”

Lake County art lovers will have a chance to see Sandra’s work firsthand when her solo exhibit, Messages, opens at the Mount Dora Center for the Arts on Feb. 22.

Sandra, who has a Bachelor’s in design from the Design Academy Eindhoven, the Netherlands, says her earliest memory of being an artist was at the age of four with a drawing of a rooster. As a young artist, she went for realism, painting flowers and nature.

“I painted everything very realistically, and then somebody said to me, ‘You’re just copying. You didn’t create the flower.’ I realized that was true. Anyone can paint what exists,” Sandra says. “I want to see things in a very personal way, so that my paintings reflect my experiences and give people another perspective.”

MOUNT DORA’S CENTER FOR THE ARTS Marketing Coordinator and Executive Co-chair Christina Padgett is very excited about the upcoming exhibit, which will run through Mar. 28.

“Sandra is such a special person,” Christine says. “Her art is large and breathtaking.”

Sandra describes her work as a mix of abstract expressionism with occasional figurative art. Her influences include Oriental painting, Impressionist, fragmentative, and pastel techniques. Much of what she paints comes from the intense way she observes the world around her, spending time in deep thought before she picks up her brush.

“I’m picturing when I‘m thinking,” she explains. “I assimilate these images and then layer them.”

Christine says she feels people will be impressed with the beauty and compelling nature of Sandra’s art.

“Sandra’s technique and process really draw you in,” Christine says. “She uses a lot of large, real, vibrant colors.”

SANDRA SAYS SHE OFTEN SEES AN OBJECT in layers when she is studying it, and she becomes completely aware of everything around that makes the object what it is. Her painting reflects the color and focus in what she sees.

“I see a palm tree, but I paint the story behind the palm tree, including the birds around it, the sky and clouds above it,” she explains. “I combine images, sound, movement, and paint that so you get more of an experience.”

The exhibit at Mount Dora Center for the Arts is entitled Messages because Sandra sees her paintings as letters to the viewers.

“When we title an artist exhibit at the Mount Dora Center for the Arts, we review exactly what the artist is trying to say and use this to give viewers a hint of what they will see,” says Christine, who is coordinating the exhibit. “Sandra says that illustration is to art what poetry is to writing. She completely understands what she is painting and adds new dimensions to them.”

Many of the awards Sandra has won are from galleries in Florida, including the Osceola Art Center, the Orlando Museum of Art, and the Sarasota Art Center.

Sandra’s work is fueled by an imagination that is still as free and open as a child’s. This is exhibited in the vibrancy of paintings like the delightfully bold “Marsh Frost” and the inventive and peaceful “Dream River.”

Much of what Sandra paints is inspired by the many books she reads.

“I love poetry, and I’ve been reading a lot of Robert Frost lately,” says Sandra. “His poetry is all about simple things: country, snow, the forest. He makes you feel how cool the snow is, bringing you into his world with his words. With painting, you can put words and colors together that have never been together before.”

With a little self-deprecating laugh, Sandra says her paintings bring together opposites in a way that makes them work.

“I make oxymoron paintings like a blue horse near a yellow river,” she explains. “It’s always right, no matter what I do.”

Sandra says the size of a canvas is a matter of practicality. Smaller paintings are easier to place. Currently, she is working with 12 X 26-inch canvases, which can be very wide or very long. She likes to get away from a boxed-in feeling that conventional sizes sometimes convey.

“I’m also doing a 10 x 10 series,” she adds. “You can place the paintings any way you want. They always fit together like puzzle pieces or math, which I love.”

That same practicality makes her aware of her future, and her place in a world filled with people striving to leave a mark.

“I always have the idea that when you paint, you put something tangible in this world,” she says. “I hope they will remember my work, that I’ve left something behind like a message in a bottle.”

AN OPTIMIST BY NATURE, Sandra admits that bad things happen. However, with her art, she can cheat and ensure that everything turns out as it should. Sandra believes her upbeat perspective comes from her childhood experiences as a sickly child. She was in and out of hospitals often.

“I know my parents must have worried, but they didn’t communicate that to me,” Sandra says. “I always felt like everything would be all right.”

Now she wants everyone else to experience that reassurance through her paintings.

“Art is telling stories and cheating with life, letting people in on a secret,” she says. “Maybe what people have always wanted to know is that other perspective.”

Her husband is an engineer and his job meant the couple and their two daughters lived in a variety of places around the world. During that time, Sandra mostly did graphic design for corporations, including designing logos, brochures, and other corporate items. After the family moved to Orlando, Sandra left the corporate world behind to concentrate on her original art.

“You’ve got to do something you like to make a career of it,” she says as she explains her happiness and contentment. “I’m an artist and life for me doesn’t get any better than that.”