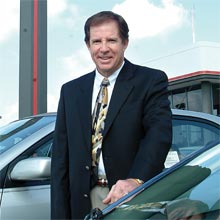 Like a finely tuned automobile, Frank DeLuca is at his best when he’s on the go. Whether it’s arriving early at his Toyota dealership, boating in the Caribbean, or globetrotting around the world with his family, Frank prefers to be on the go.

It’s a formula for success he’s incorporated most of his life, starting back to the days he worked as a shagboy on the lot of a Mazda dealership in Orlando. Back then, as a high school student driving around in a candy-apple red 1948 Chevy, Frank was aspiring to a career as an oceanographer. But he eventually turned his path to the automotive industry after realizing he was not cut out for the rigorous academics required.

“I found out how much science was involved and knew it wasn’t for me,” Frank says.

So Frank stayed working for the Mazda dealership and eventually worked his way up to general manager.

“I had just taken the job for the heck of it really,” Frank says. “I started off detailing cars and then moved to sales and then to manager and then eventually to general manager.”

By 1978, Frank had established himself as the GM of the Mazda dealership and had gleaned enough information about the business that he decided it was time for him to step out on his own. So when the opportunity arose to open a Toyota dealership in Marion County, Frank jumped at the chance.

His move may have set into motion a trend that is still being carried out today. When the first incarnation of DeLuca Toyota opened for business, his was the only car dealership on State Road 200.

“They had just started building the Dodge dealership, but we were the only ones around then,” Frank recalls. “The street looked much different. There was no mall and none of all these other dealerships.”

The landscape has continued to change significantly with the emergence of many competitors, but Frank says he enjoys the growth that Marion County has experienced since he first arrived here. In fact, his own dealership has tripled in size since 1978.

Without the overwhelming feeling of an uncontrolled building boom, the county has maintained a sense of order that Frank says preserves a hometown feel.

“There’s been a lot of growth here, that’s for sure,” Frank says, “but it’s good growth. We have a lot of professionals that have moved here and they bring a different kind of quality of life. We certainly have a lot of retirees and that’s good. Marion County is beautiful and it continues to grow in a very good way. It’s not like other parts of Florida that are just out of control, like down south. You couldn’t pay me enough to own a dealership in South Florida.”

His fondness for Marion County has made it easy for Frank to put into practice one of his key business principles.

“It’s hard work, but being hands-on makes a big difference in the business world,” Frank says. “There are so many absentee business owners — that just isn’t going to get it done.”

So Frank makes it a habit to arrive early at his dealership and to know all the comings and goings of his business.

But Frank also knows the value of a little down time. After cars, his next big passion is boating, a love that dates back to his days of dreaming of working under the sea.

“I live in the country club, but I’m really a poor golfer,” Frank says, “so my thing is boating.”

Often, he and Carole, his wife of 38 years, will spend weekends on their Sea Ray, Nauti Lady, in the Gulf of Mexico. When the urge strikes them, the DeLucas will also take their boat to the Bahamas.

In fact, traveling is a big part of the DeLucas’ life. They just recently returned from a safari in South Africa and have more than two million miles banked up in frequent flyer miles. Out of all that globetrotting, Italy is a favorite spot for the couple.

“When we find a place we like, we tend to go back there often,” Frank says. “We like Sorrento and Venice quite a bit. We’ve been there a lot.”

But Frank and Carole still cherish their time spent in Ocala most of all. Frank gives his time and money generously to several local charities: Blessed Trinity, the YMCA, Salvation Army, CFCC, the Marion County Board of Education, Hospice, and Rotary. Over the last two decades, he has quietly donated thousands of dollars to many groups but is probably most generous to the organizations that have touched his life in the most personal of ways.

“Hospice helped my family a great deal. My father passed away from cancer in 1986 and they were very gracious towards him,” he explains. “Hospice has been very supportive with many of my friends, too.”

But Frank isn’t the only DeLuca involved with local charities. Carole’s name is well associated with several of her own. According to Frank, she is a “great proponent” of the Ocala Royal Dames for Cancer Research, the Pioneer Garden Club, Festival of Trees, and HOPS.

While at home, Frank and his wife also make time for their two children and five grandchildren. And, of course, he spends a lot of time dealing with cars.

So what does the owner a car dealership drive? “Anything Toyota,” Frank quickly answers. Currently that reply is a Landcruiser, but Frank says he still has fond memories of that ‘48 Chevy.

“I ended up selling that car right off my lot,” Frank recalls. “It was hard — that was my baby.”