What if I told you that art isn’t snobby and doesn’t always have to be super serious—that it can also be colorful, familiar and even irreverent? 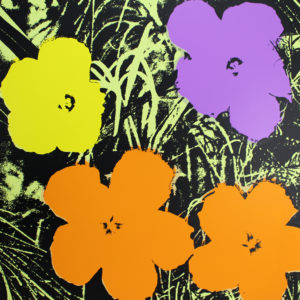 In the early 1950s, a group of British art students calling themselves the Independent Group grew tired of what they perceived to be “the same old thing” in the art world and how art should be made. Fascinated with American consumer culture and its slick, high-design advertising, these young artists wanted to incorporate popular and recognizable images into their art. They would use glossy images from women’s magazines, comic books, “girly” magazines and trendy advertisements to create work that at first glance might seem superficial, but often spoke volumes about consumerism and 1950s-era culture. And thus, Pop Art (short for “popular art”) was born!

By the 1960s, Pop Art had spread to the United States and artists such as Robert Rauschenberg and later, Andy Warhol, were putting their own spin on the movement. For example, Warhol used imagery from everyday items such as Brillo Soap Pads and Campbell’s Soup cans and literally made them larger than life in the form of monumental 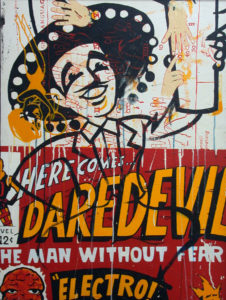 sculptures. Part of Warhol’s genius had to do with the way in which he chose to aggrandize the type of “throwaway” items that most people scarcely think about, let alone contemplate. Yet the graphics on the boxes and cans were specifically designed to grab your attention in order for you to notice, and then buy them. Due to his background as a commercial artist, Warhol intrinsically understood how attention-grabbing colors and package design seized your attention. He forced you to really look at them by monumentalizing and often repeating their forms much like the repetitious display of items in a grocery store—you couldn’t just toss them in your shopping cart and forget about them. These paintings and sculptures were big, in your face and, due to their size, in your way if you tried to walk around them.

Warhol also understood how repetition can drill something into your consciousness; anyone who has had a song stuck in their head is familiar with this concept. His repeating visual 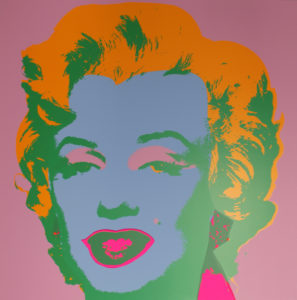 images, much like musical notes, get stuck in your head. Warhol also used the themes of repetition and consumerism in creating a series of prints that reproduced his images for purchase.

Among Warhol’s most iconic series of prints were those of international superstar Marilyn Monroe—an enduring legend of popular culture.

The Appleton Museum of Art now owns a Marilyn print as well as Warhol’s famous Flowers 4, in addition to works by other famous Pop Art pioneers such as Robert Rauschenberg. They are all currently on view in our Modern and Contemporary galleries; I invite you to come experience Pop Art for yourself!