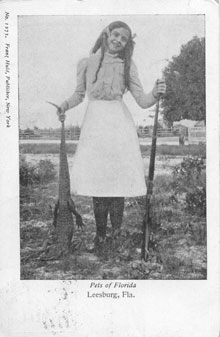 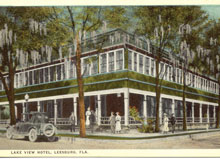 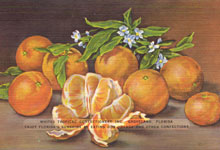 Postcards have always been an inexpensive way to both record visits and keep in touch in a creative, expansive sort of way. And it’s a good thing because historical postcards are some of the only recorded images we have of various locales throughout our country.

Many of the buildings, bucolic landscapes, and modes of dress are images from bygone years. Historical postcards are a visual link with the past.

“I have always been interested in history,” Clayton says.

Clayton, a former florist by trade, at first was only interested in historical postcards of Eustis; however, there just wasn’t enough of Eustis to keep him satisfied.

Bishop’s collection includes both colored postcards and black and white. He also has more modern postcards from the 1950s and 1960s.

“The postcards offer a pictorial history of Lake County that’s second to none,” says Leesburg History Museum curator Rick Reed. “It shows what life was like more than 100 years ago, and it shows it in color.”

SOME OF CLAYTON’S POSTCARDS offer a 1890s-to-early-1900s bird’s-eye-view of various townscapes, such as the Mote-Morris House and surrounding downtown Leesburg neighborhood.

There’s an interesting mystery here. How were these Victorian just-above-tree-top photos taken? It was unlikely planes were available to photographers before 1910.

Rick thinks these might have been taken in a hot air balloon. However, Clayton says the photos could have been taken from a variety of high places such as a high scaffold or church steeple.

“The ingenuity of the old photographers was unlimited,” Clayton says. “They would do anything. Some people would use a ladder truck to go up 40 feet. Some would climb trees. They would go up poles—anything to get a different perspective of a picture.”

“If you look down Main Street (Leesburg) there are still some of these old big wooden houses,” Rick says. ”Many had windows on three sides of a bedroom to catch a breeze. That was important.”

MANY OF CLAYTON’S VICTORIAN POSTCARDS are colored through German technology. Until the 1950s, the U.S. didn’t have the technology that Europe had to color black and white photos.

“After World War II the U.S.’s printing caught up with Germany,” Clayton says. “Germany had the best color printing and dyes that existed.”

He says the color process was done by hand.

“One lady would put in green for trees, the white in for clouds, and blue in for sky,” Clayton says.

Of course when Germany declared war on much of the world, starting with the arrival of World War I, the United States stopped trade with the country—no longer benefiting from its color technology.

Clayton’s postcards of downtowns in the 1890s and early 1900s show all roads were dirt, and if they were “paved,” it meant clay. Trees were much more abundant. Large trees (now gone) lined the dirt Main Street in Leesburg.

Many of the stately buildings in the postcards such as the Lake View Hotel in Leesburg and the Ocklawaha Hotel in Eustis are also gone.

“They photographed everything,” Clayton says.

A member of the Lake County Historical Society, Clayton is reflective about several of his postcards, which date 1907 or around then, of the Ocklawaha Hotel. The hotel once existed at the intersection of Center Street and Badger Avenue in Eustis and it’s where Clayton’s parents Clayton and Margaret first met. Perhaps it was love at first sight.

“It was the only blind date either of them had ever been on,” Clayton says.

“Other communities don’t have that—they don’t have the treasure trove,” Rick says. “Clayton Bishop is one of Lake County’s greatest historical treasures because of the postcard collection he’s accumulated.”

Clayton goes to postcard exhibitions where he hunts for more postcards. Though he has thousands of Central Florida, he continues to collect about a dozen a year.

“I’ll see something that intrigues me and pick it up,” Clayton says.

Want To Know More?
Clayton sells discs of his postcard collections, which also have slide shows. The collections include towns outside Lake County as well as Central Florida springs. Call Clayton at 352-357-6460 or e-mail him at www.cpbishop@comcast.net.