Pottery has been produced for centuries and usually falls into several categories, such as practical containers for everyday use, decorative art pieces, or a mix of the two. Practical pottery was most popular before refrigeration. Food had to be preserved and stored. Plain fired clay jars, churns and crocks were the norm. Over time, glassware and mass-produced containers (think Mason jars and Tupperware) replaced handmade pottery.

To stay in business, potters started making more decorative pieces to sell. Many of these artists still find inspiration in the old-time pottery used by pioneers. This tradition is still evident in the famous Southern folk pottery of the Carolinas and Georgia.

The first “modern” commercial pottery in Florida was made at Knox Hill, near DeFuniak Springs in the Panhandle. A potter named M.M. Odum started the Knox Hill operation in 1859. Odum made practical pottery for everyday use, but his timing was bad. He only lasted a few years before the Civil War consumed his business and production ceased. Only a few examples of his work are known today and command high prices from collectors.

Henry Graack, who lived years later, was Odum’s opposite. Graack became a famous Florida potter the easy way­—he purchased an existing operation, then relocated it to a major tourist mecca. In fact, he made and sold pottery to tourists at several popular destinations including Silver Springs in Florida and Fort Ticonderoga on Lake Champlain in New York. His story is an interesting one.

In 1921, Danish potters Henry Graack Sr. and Henry Graack Jr. moved to Florida and bought Manatee River Pottery in Bradenton (founded by Mary Ward in 1914). They changed the name to Graack Pottery and went to work. In 1924, Henry Sr. returned to Denmark and Henry Jr. moved his pottery business to Fort Ticonderoga. 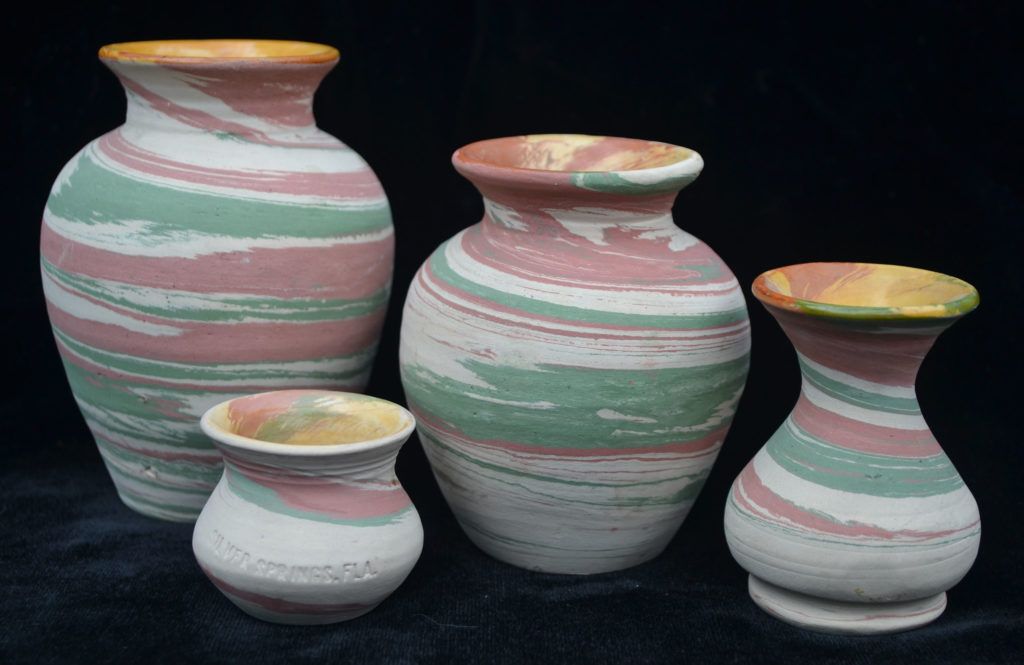 Years later, in 1935, William Ray, one of the owners of Silver Springs, lured him back to Florida to set up shop at his booming tourist attraction. Graack, assisted by his daughter Madelyn, would remain at Silver Springs for 31 years, until his death in 1966.

Graack specialized in unglazed, small, colorful decorative pots with swirls of different color clays, mainly reds, greens and whites. Some of his Florida pieces even included orange blossom scent added to the clay as an extra touch.

Graack produced untold numbers of art/tourist pottery pieces that were sold as souvenirs. His small vases and flower urns can still be found in antique shops and, while collectable, are quite affordable. There are a few Gracck pieces in the Silver River Museum & Environmental Education Center.

These two books are great sources to consult for more information: Old Florida Pottery, Potters in Paradise: The Collector’s Guide to History, Makers and Marks 1859- 1966 by Alfred R. Frankel M.D. and Raised in Clay: The Southern Pottery Tradition by Nancy Sweezy.

Silver River Museum is closed to the public currently. For information on reopening dates and the collections, visit silverrivermuseum.com or call (352) 236-5401.