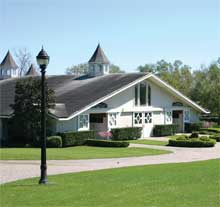 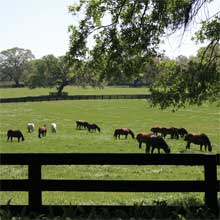 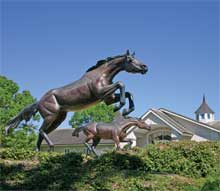 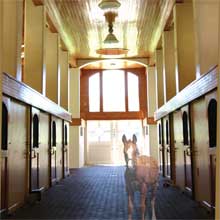 Anyone who has visited Disney World even once can attest to the sense of magic and anticipation that permeates the park, where something magical seems to appear around each corner. At their Roberts Quarter Horse Farm , Mary and Larry Roberts have taken that same kind of extraordinary talent for creating magic and channeled it in an equine direction.

Pass through the gates of this pristine operation and you immediately realize the Roberts have spared no expense in developing a haven for their horses. Yet even with all the memorable touches that delight the senses — the meticulous landscaping, elegant barns, the fanciful sculptures, and night-lit waterfalls — it’s obvious this is a practical, working farm, carefully designed to run smoothly and efficiently. Good looks are just an added bonus.

Moving to Ocala made sense to the Roberts, who chose the area because of the climate, good grass, and excellent opportunities for training horses.

“Ocala is a really great place to bring up kids and horses,” says Mary Roberts. “I think the best things about Ocala are the friendly people and the beautiful oak trees. To me, it’s heaven.”

Situated in the heart of northwest Marion County’s lush horse country, Roberts Quarter Horses is an equine paradise dedicated to raising and selling premier Western Pleasure horses. Started in 1996, the farm now totals nearly 1,250 acres, and is home to about 300 horses.

The farm owns several stallions, including A Sudden Impulse, a leading Western Pleasure sire. Other stallions standing at the farm are RL’s Zip Code, This Zip Is Chips, RL A Total Sudden, and RL Once Upon A Impulse.

The Roberts purchased A Sudden Impulse, a World Champion Western Pleasure horse, in 1999 and he has already sired multiple champions.

“We knew if we bred him to the best mares, we could make him a leading sire,” explains Greg Wheat, farm manager and head trainer. “And we have.”

This year (2005) is the first year A Sudden Impulse will breed outside mares. Among his top offspring is RL Best of Sudden, a colt that won the prestigious, first-ever $100,000 Equine Sports Medicine Celebration Challenge Championship in St. Louis last year, an impressive purse for Western Pleasure competition.

The farm breeds about 80 mares each year and sells about 200 horses a year, including yearlings, two year olds and some in-foal mares.

“We sell privately right off the farm, not at public auction,” says Greg. “We want people that buy horses from us to be happy, love the horses, and give them a good home.”

Long-time owners of RL Carriers, the Roberts still base their trucking business out of Wilmington, Ohio, where this horse-loving family initially got hooked on Quarter Horses nearly 30 years ago. In fact, Wilmington is the site of Roberts Arena, a first-rate show facility that hosted the Roberts Whistle Stop Futurity for Western Pleasure horses. The show was named after Mary Roberts’ fondness for the popular book, Fried Green Tomatoes at the Whistle Stop Cafe, later adapted into an even more popular movie.

Of the Roberts’ three grown children — Larry, Michelle, and Roby — only Roby is involved in the horse business. His wife, Jennie, is also active in the industry and shows some of the horses herself.

“Mary Roberts always wanted to have her own band of broodmares and a stud on the leading sire list,” says Greg, “so that’s what we’ve worked towards doing.”

“We didn’t show at all in 2004 because of the new babies,” Greg says with a smile. “Roberts-bred horses are easily identified by the initials ‘RL’ in each of the horse’s names.”

Larry and Mary Roberts live on the farm and travel to shows to cheer on their “home team,” which shows under the name Roberts Development Corporation.

“Mary hasn’t shown for a few years, but they love to go watch and see Roby and Jennie show,” adds Greg.

“Mostly what we’re doing now is raising horses and selling them,” notes Mary. “We will be showing at a few shows, but we don’t want to show that much any more because we just have a lot of fun staying on the farm.”

Graceful oaks link boughs at various places above the winding roads throughout the farm. These stone-paved roads curve gracefully through the property, leading from one immaculate barn to the next. In a large covered arena, young horses are being trained each morning. Music playing in the arena drifts across nearby pastures, underlying the fact that even though work is going on, the participants aren’t afraid to have a little fun.

In front of the training barn, a dramatic sculpture of five galloping horses turns heads from passersby on the road below. The stunning works of art are readily visible from the street, although at close range the life-size bronzes are doubly impressive.

Other more playful bronzes make an appearance throughout the farm: a smiling pig perches on the lawn near the office, children crowd happily on a bench, a tortoise lumbers across the grass, and two children take a carefree ride astride an alligator. There are other more “traditional” bronzes and sculptures, such as those you might expect to find in a formal garden, but there is a sense of fun in discovering the more whimsical sculptures.

“Mary really likes the sculptures and she gets them from all different places,” says Greg. “Larry bought her a new one this year. It’s become a signature of hers.”

Visitors to Golden Ocala Golf & Equestrian Club will notice similar sculptures there as well, many of which tell a story at a glance, or bring a smile to the viewer. The Roberts are also active in real estate development, which takes place under the name Roberts Development Corporation. Over the past several years, they have dedicated a great deal of time to developing Golden Ocala. The golf course has been popular since the club opened, and houses are now springing up on homesites throughout the exclusive property. Golden Ocala has already become a favorite spot for community events and the Roberts enjoy attending some of these.

“We just want to continue trying to make it the prettiest country club in the state of Florida, one that people will be proud to join and be part of,” says Mary. “We’re getting a lot of people starting to build houses now. Our goal is to make it the best that we can. That’s our goal with everything we do.”

Busy as they are now, Mary and Larry Roberts are determined to slow down a bit at this stage in their lives. The couple has seven grandchildren and enjoys spending time with them on the retreat that is Roberts Quarter Horses.

Although committed to being at the top of the Western Pleasure breeding industry, the Roberts refuse to sacrifice their horses’ happiness to be there. Astute in business, they are also dedicated to the well being of their horses.

Engraved on a plaque at the grand entrance to the farm are the following words by Mary Roberts:

May the horses that pass through these gates be well taken care of. May they be loved as much as they were loved here. If not, God, may they enter back into these gates where they will find love and happiness until Your hand comes to take them home.

Life in the Slow Lane

Intentional or not, there is a pleasant irony in the fact that the tortoise compound at Roberts Quarter Horses is located in the infield of the race track. While the training horses exercising on the track move at a decidedly quicker pace, the giant tortoises that live there lumber along at less than one mile per hour.

“I’ve always liked turtles — there’s just something about them,” says Mary Roberts, who owns the farm with her husband, Larry.

Complete with wrought-iron fence and a gracious “tortoise house,” the compound is now home to four giant tortoises, both Galapagos and Aldabra. The Galapagos is the largest living tortoise; it can weigh more than 500 pounds and can measure six feet long.

Topsy, a Christmas present to Mary 18 years ago, was the first of the Roberts’ tortoises. An Aldabra, his shell was only about one foot in diameter at that point, but he has definitely grown. “You could carry him around then, but you definitely can’t do that now!” Mary remarks.

Since Topsy, three other tortoises have joined the family: Filo, Linus, and Lucy.

“Filo is a Galapagos,” Mary explains. “He was 92 years old when I bought him and that was nine years ago. He was just like a big kid when I got him. He follows you around like a puppy. He likes to be petted and kissed, and he likes it best when you feed him out of your hand.”

Surprisingly active, the giant tortoises spend much of their day feeding. During the hot part of the day, they will seek shade and will even wallow in water or mud pools, if available. If necessary, tortoises can survive for long periods without drinking and their bodies actually break down fat to produce the necessary water.

Of course, the Roberts’ tortoises don’t have to worry about going without water or a supply of fresh fruit and dry turtle “chow” that looks similar to large dry dog kibble. There is plenty of grass in the compound and during the summer, the tortoises have the run of the track infield where there is an abundance of prime grazing.

The four giant pets seem most content in their accommodations. When family visitors arrive, the tortoises are quite alert, rising up to full height on their surprisingly tall legs and lifting up their heads on long necks in hope of receiving a snack or a caress. Two of these long-lived tortoises are already over 100 years old.

“They live a long time,” says Mary, “so hopefully, the grandkids will love them!”