Hours before these words were written, I bounded in from our porch, old-man blood pumping, grill flames dancing—and bellowed, “Cargo! Stop licking the lamb!”

Cargo the kitten dashed from the counter in a familiar blur of black, a Nike swoosh of evil bound for sanctuary and to plot the next big job. The lamb filets, marinated in Italian dressing—and now—cat drool, awaited the warm embrace of ignited propane.

The lamb was grilled and devoured. The kitten attack was filed as yet another lesson learned. Two weeks earlier, our daughter Katie proclaimed, “Just for future reference, I will eat bacon the cat has licked.”

Let’s just say things have changed in our house since a tiny, terrified kitten climbed into the bowels of a Nissan and piddled on my head. 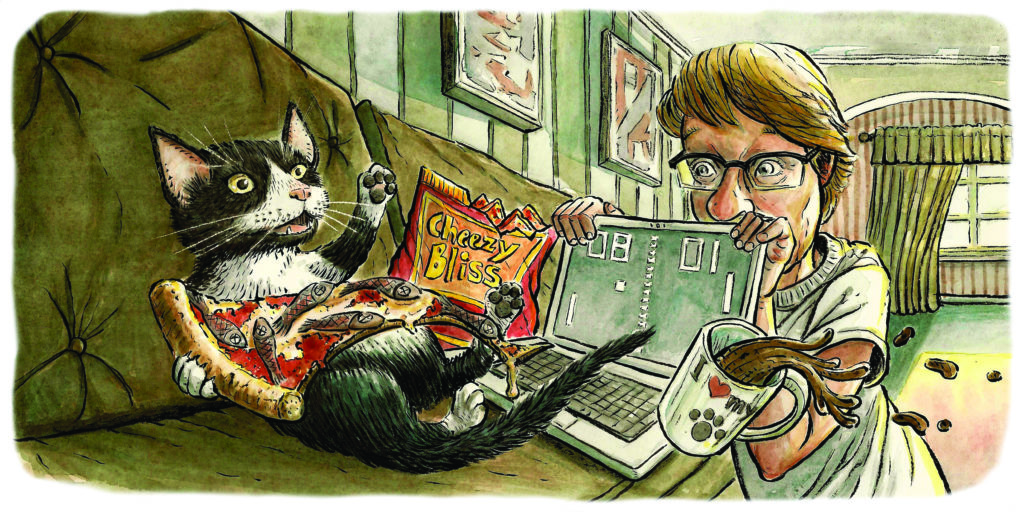 Katie and my wife, Amy, thought she was a baby squirrel when they saw her on a nearby road in September. They pulled over and discovered a kitten that was maybe 7 weeks old. Then the kitten dashed deep into the undercarriage of the car.

There she stayed, trapped for nearly three hours, much of that time shaking and staring through greasy Nissan parts at her rescuer in cargo shorts and sandals wedged under the car. Once, she found an open crevice and peed on my forehead.

Eventually, we removed the wheel and, ever-so-slowly, extricated her from a greasy sliver in the wheel well. Wrapped in an old towel, she locked eyes with four Schlenkers and trembled.

Here’s the thing: We were not looking to expand the zoo when I received the kitten distress call. One old cat named Catniss and one old Corgi named Abbey provided all the love, hair clumps and pet vomit we needed. We adore them. They adore us. Feed, pet, scoop, repeat.

But when the kitten emerged from the car, eyes wide and wet as a newly hatched human, we knew she was a Schlenker.

Here’s the other thing…she is terrible.

She is the worst-behaved pet I have ever met, and I grew up with a basset hound that took down a Thanksgiving turkey.

Cargo, as we named the kitten borne of the Nissan, is fearless. She lives for kitchen counters, sinks, garbage cans, sneak attacks, sheets to ravage, jeans to climb, laptops to chew, ornaments to smash, hamburgers to steal and, as noted, food to lick.

We spray her with the “Feline Behavior Modification” water bottle, but she always returns to the scene of the crime. The game is afoot.

The final thing: We absolutely love her. She is the most charming cat I have ever met. Her face is marked with an upside-down white heart. Her huge eyes reflect fun and wonder. She loves Netflix and University of Central Florida football. She loves cuddling as much as strewn trash. She has made fast friends with Catniss and is working on the Corgi. She is a mischievous, lap-loving, purr machine. And, in a year that brought us a broken ankle, husband-mangled meals and a pandemic, the stowaway we did not want was just what we needed.