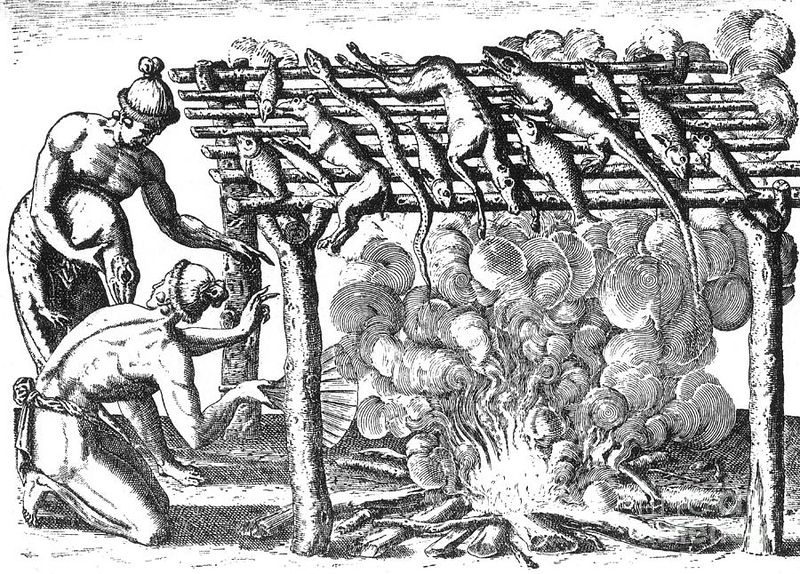 Travel back in time even further to prehistoric Florida and the menu of a local Timucuan family would be dramatically different.

With limited agriculture and no refrigeration, meals were less about a culinary experience and more about basic survival. Imagine yourself standing in the woods along the bank of the Ocklawaha River 1,000 years ago. What would you eat? The answer—whatever you could find. People become far less picky when hungry.

Because prehistoric people often dumped their trash in heaps near their homes, we can learn a lot from the excavation of these miniature landfills (called “middens”). They are treasure troves for archaeologists and can reveal much about the eating habits of those who once made their home here. The remains come in the form of bones and teeth from the animals, such as deer, rabbit, raccoon, birds, snakes, frogs, sirens (eel-like creatures), fish, aquatic snails, turtles, alligator and, often, rodents. Patterns of bone breakage suggest brains and marrow were consumed along with the choice cuts. Evidence of charred plant remains, including nuts and seeds, provides further insight into their diets. Like a culinary crime scene investigation, identifying these animal and plant remains can tell us where the food was collected, the season in which it was harvested and also can provide clues about which ecosystems were relied on for survival. Two patterns often appear: First, prehistoric people relied heavily on wetlands for food (think of all the wildlife you see while kayaking as opposed to hiking through the forest). Secondly, people pretty much ate anything they could catch. So large villages were often built near rivers, lakes or wetlands. This provided not only fresh water but also a primitive “grocery store” for the inhabitants to visit.

All of this boils down to a couple of key points: There is a big difference between eating for pleasure (think ice cream) and eating for survival (I’ve read that grasshoppers are actually quite nutritious). We should incorporate more fresh, locally sourced foods into our diets like our predecessors here did, as we modern folk can afford to make healthier choices. We also need to do whatever we can to protect our wetlands. They are vital to healthy ecosystems and fresh drinking water—and are still a great place to catch meal if you need to.

The Silver River Museum is located at 1445 Northeast 58th Avenue and is open Saturday-Sunday 10am-4pm. Visit silverrivermuseum.com or call (352) 236-5401 for more information.