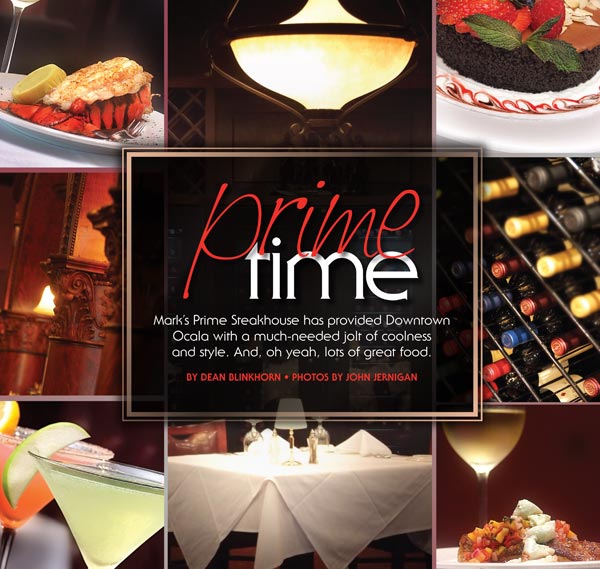 Downtown fixture and longtime local attorney Dock Blanchard knows a thing or two about the restaurants that have occupied the popular address on the corner of Magnolia and Broadway over the years. Most afternoons at precisely 5pm, Dock ambles across the street for an after-work aperitif or an early dinner.

Whenever I could convince my co-workers at the magazine to join me for our own post-work stress-breakers (okay, just a couple of pints of Blue Moon), we’d almost always see Dock already there, holding court at a porchside table, kicking back in his neatly pressed pants and omnipresent loafers and telling stories. Lots of stories. 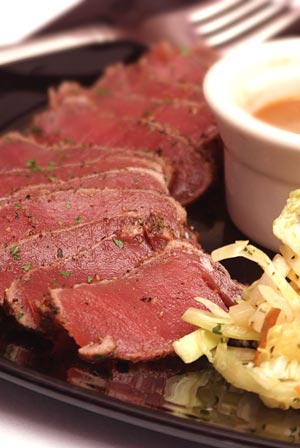 Therefore, I knew his opinion would be a valuable one for this review of Mark’s Prime Steakhouse, the latest entry at his beloved downtown location. This offshoot restaurant from the popular Gainesville location arrived in Ocala by succeeding Reno’s Grille, following an extensive renovation and expansion of the space late last year.

So what does Dock think?

“They have my chair reserved,” he laughs. “There’s no other place in town that offers a steak that even comes close.”

See? I knew I was off to the right start.

Mark’s Prime is the third restaurant that Cindi Nicholson-Tremblay has opened in this same location. She owned Brass Rooster and Reno’s, but grew tired of the daily pressures that accompany the day-to-day running of a restaurant, so she jumped at the chance to work with Billy Scheel, a businessman who specializes in downtown redevelopment projects, and the other partners.

“After nine years on this corner, my heart’s downtown,” Cindi explains. “I was determined to move forward and was thrilled to buy into the Mark’s concept. Now I can watch it grow and change for a third time.”

The transformation of Reno’s into Mark’s Prime took many months, but the end result is stunning. The former’s eclectically hip style has been replaced by the latter’s rich, well-appointed dark leather and burgundy tones. Like Reno’s, the bar and dining areas have been kept apart in the new space, just with a much-larger hall for clusters of linen-draped tables and rows of spacious, semi-circle booths that line the walls.

The generous bar is meant to be the perfect waiting area before being shown to your table, but it can also be a destination unto itself. On most weeknights, this area is where the party starts—and often finishes. Extensive drink options and a unique menu have induced many a guest to request a seat in this popular hangout.

This split-personality was planned.

“I thought the bar would be calm and quiet, but we have quite a crowd that stays and hangs out all night,” Cindi laughs. “We can keep two different crowds running because we want to make sure everyone’s comfortable here. Mark’s is not your traditional, fine-dining steakhouse.” 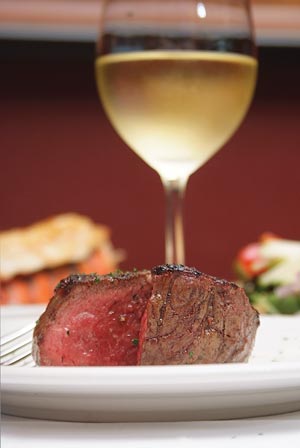 After eating there one recent Saturday evening with my wife, I’d say Mark’s has the fine-dining part down to a science.

After being seated in one of those Godfather-like booths for our 8pm reservation, Karen and I were prepared for an evening of remarkable courses. Having dined at a high-end steakhouse before, a Shula’s in Tampa, we had no way of knowing just how much we would enjoy the Mark’s experience here in Ocala.

After debating many possibilities for our appetizer, we settled on the Bacon Wrapped Scallops. Surrounded in smoked bacon and served with a side of mango salsa, the scallops were firm, not tough, and the salsa cut through the hint of chipotle.

Our salad course was next and Karen and I had a hard time narrowing down our choices to the Original Bleu and the Chop Salad. Both came with house dressings, romaine, spring greens, and many fresh ingredients. I look forward to trying the others on our next visit.

Our server, Suni (as in a “sunny” day), recommended a pair of tasty wines to accompany our meals and we took her up on the suggestions. I had a Sauvignon Blanc to pair with the Chilean Sea Bass Amandine, and Karen opted for a Cabernet Sauvignon to accompany her Petite Filet. The generous portion of sea bass was pan-seared and topped with fresh asparagus, toasted almonds, and diced tomatoes. The filet was a baseball-sized, eight-ounce portion of their leanest corn-fed beef, perfectly cooked, with a hint of pink in the center and a crisp exterior. At Suni’s suggestion, we selected sides of Lyonnaise Potatoes and Sauteed Wild Mushrooms, which were enough for a table of four.

Then, finally, came the dessert course—a sorbet with fresh berries and my favorite, Chocolate Paradise, a mousse with an Oreo and Kahlua crust and a layer of toasted almonds, raspberries, and hazelnut cream. Both were moderately portioned and a nice finishing touch on a memorable meal.

Somewhere during the cavalcade of dishes delivered to our table, I got up to take a quick tour of the restaurant, since I always like to observe the other patrons’ experience. On my return, I noticed Frank DeLuca, the well-known owner of the local Toyota dealership. He and his lovely companion were enjoying their meals at Table No. 44. He told me this little tidbit when I called him the next day to get some support quotes for this article.

Frank mentioned that he has a favorite table at all of his usual haunts, whether they’re in Ocala or Tampa or out in Colorado. Mark’s is no exception—his request for No. 44 is noted in their computer records, so even a new hostess can seamlessly accommodate his standing request.

So, to this frequent traveler and veteran of numerous high-end steakhouses, how does Mark’s compare?

“I like the warm atmosphere,” Frank says. “Mark’s offers a big-city, uptown feel—and they have an absolutely fantastic pork chop! But the prime ribs and filet mignons are awesome, too. I’ve had just about everything on the menu.”

Cindi has noticed an unusually high number of repeat customers like Frank and Dock since the restaurant opened earlier this year. The lingering recession doesn’t seem to have penetrated the walls of this on-the-expensive-side eatery.

“We haven’t felt it all,” she admits. “And I think it’s because we don’t want to be perceived as a once-a-year restaurant.”

To that end, Cindi has plans to launch a “businessman’s lunch” sometime in the fall and is “working hard” to attract the “Outback crowd” to this locally owned restaurant in the heart of Ocala, something she’s quite familiar with from her previous ventures.

“Since Gainesville doesn’t do a lunch, this will be a first for us,” she concedes. “We want to see this corner stay alive during the day.”

How popular is Mark’s with the locals? Well, let’s just say that Frank is on the waiting list for a wine locker, a place to store his favorite vintages. When he mentions this, Frank pauses and then suggests I leave that point out so he’ll get his locker sooner. I remind him that he’s more than likely at the top of that list.

After our brief phone conversation, which ends close to dinnertime, Frank gets a sudden thought: “Maybe I’ll go by Mark’s tonight.”

Option #1—Trade two average dining-out experiences for one extraordinary one. Make eating out a planned event, not just a spontaneous expense.

Option #2—Since the sides at Mark’s are large enough for the whole table, if you split an entrée and skip wine and dessert, you could probably leave with a check that averages $25 per person. It’s easy to spend that much at Olive Garden.

Option #3—Skip the entrée and order a romantic coupling of appetizers and dessert. Even with a moderately priced glass of wine each, the resulting check shouldn’t blow your budget.