He’s 19 years old and a few years deep into owning a company. 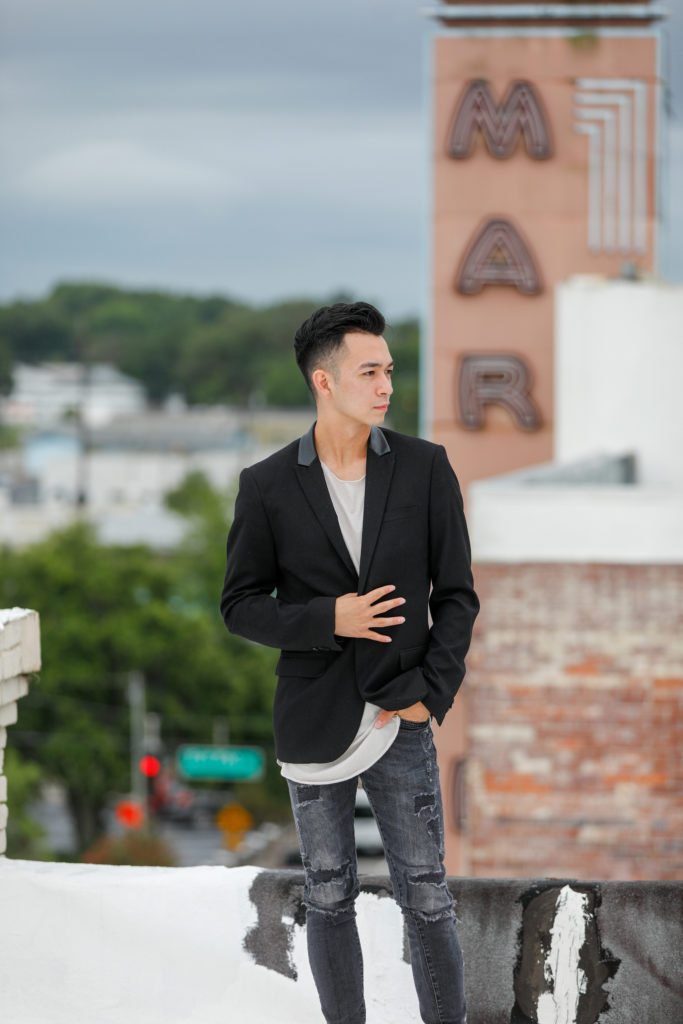 Alex Moy is considered ahead of the game, and sure, he’s young, but he knows—and has known—what he wants to do with his life. He’s worked hard, reached out to the community for support and delivered value to his clients. He’s someone who started a company when he was just a ‘kid,’ and he needed all the support he received. But now he’s ready and able to give back, to expand, to push the limits of his own vision.

From Passion To Purpose

There’s this thing about Alex—something that pushes and prods him. It’s what he credits for where he is today and what continually keeps him going.
Alex is passionate.

This young man was attending Business After Hours events with the Ocala/Marion Chamber and Economic Partnership when he was barely a teen. He had his own company name registered by the time he was 14. When his peers were focusing on high school, Alex had caught the video production and visual effects bug and started working toward living his dream. 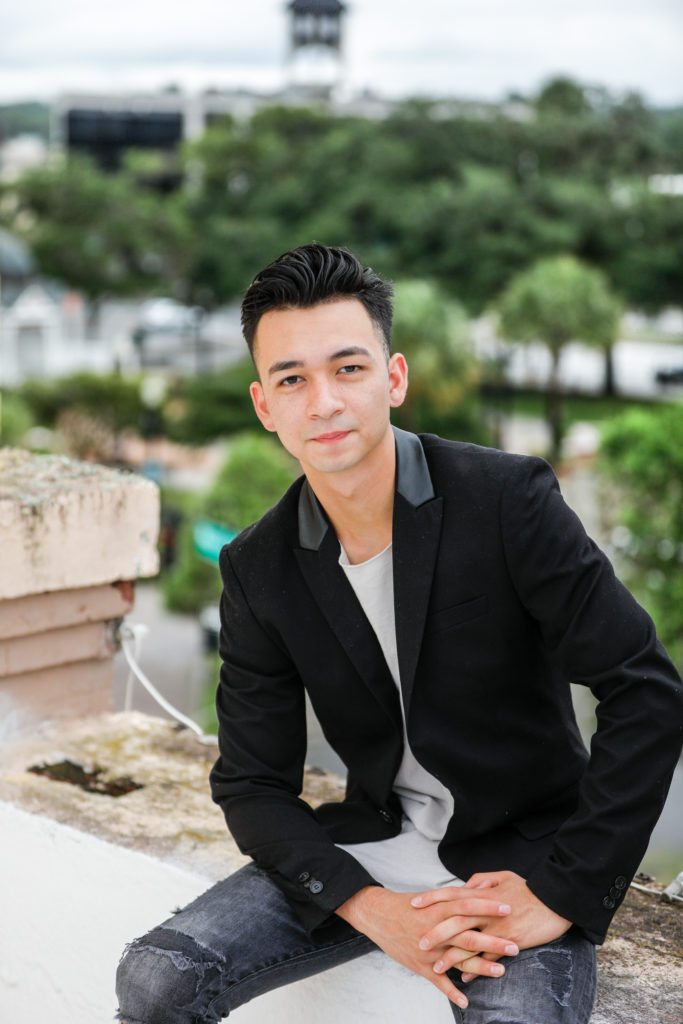 “Regret is huge for me, and I see a lot of other people who have regret because they’re not able to live their passion, live what they love every single day,” he says.

When Alex was 4 years old, he remembers seeing his older brother Nick start first grade. Nick was being homeschooled, and Alex remembers wanting to start school, too, but his parents told him he needed to learn to read first. And that summer, he did just that.

“I was starting school; I was in Cub Scouts at 4. My dad would bring me to work with him, and you know I was just learning, and I surrounded myself with people who were older than me,” says Alex. “And I just always wanted to fit in, I guess, being the young underdog—the kid in the group.”

On his 11th birthday, Alex received an underwater camera with a reverse-effect recording function. This camera changed everything for Alex. He would work to convince his friends to make videos with him. He was hooked, and that’s when he started making videos with special effects.

“I started emailing my friends my videos, and they would share it with their friends. And I would get random emails back saying, ‘Hey, this is an awesome video. How did you create this?’” Alex says. “So, this social network sort of happened through email, and then I was introduced to YouTube and started uploading videos there. I would study it a lot, and I would get some views actually. I started getting subscribers and just figuring out the YouTube game. I was very immersed in it.”

Alex made videos with all kinds of visual effects just for fun and watched them eventually rack up 20,000 to 25,000 views on YouTube. He developed a signature line at the end of digital stunts, like teleporting or holding fire in his hands. He would turn to the camera and say, “That’s how it’s done.”

Alex used that line as his first registered company name, That’s How It’s Done Productions. Then, he looked into how he could become a professional video producer. He just needed to be paid for his work, and that happened when he made his first commercial for his family’s friends at Kirby Family Farm. Alex’s commercial made its way onto TV-20 (ABC) and FOX. After the commercial aired, TV-20 contacted Kirby Family Farm, asking, “What LA company did you use?”

When the station heard that a 14-year-old kid had made it, everyone was blown away. TV-20 called Alex to confirm that he was behind the commercial and was indeed 14 before inviting him out to take a tour of the station.

“Video companies here in Ocala that still exist were just starting at the time when I was 14,” Alex says. “I was like ‘Wow, I thought I was just creating these videos for fun, but this is something that’s needed.’”

In 2014, Alex submitted a short film, called Protected, to the Silver Springs International Film Festival, and it won Audience Choice for Best Special Feature. That’s when the Power Plant and the Ocala/Marion County Chamber and Economic Partnership approached him, and he started meeting more people in Ocala—something that changed his perception of this community. Alex was able to rent space in the Power Plant Business Incubator for his video production company, and it became like a second home for him.

At this point, Alex saw a future here in Ocala for the first time. He focused on commercial work, short films and the passion projects that he wanted to do, and he filled in the gaps by doing several wedding videos on the side. He continued to build his business and finally considered himself a professional. Once he neared the end of high school, though, Alex started thinking about college. Friends were asking him about it, and he had reached out to several universities because wasn’t that the next step? To him, it didn’t feel like it.

“Well, do I want to go to college? Do I want to pursue this?” Alex remembers thinking. “I feel like I’ve built this momentum here in Ocala that I would just walk away from and walk away from the opportunity I had to leave a legacy here, especially for our generation that’s younger and that wants to leave Ocala.

“You know what, I feel like Ocala spoiled me, in a way, to accept me for who I am and as a young business owner,” Alex adds. “I feel like I should give back, you know, and make that mark here.”
So, for now at least, Alex is here to stay and college is put on hold. 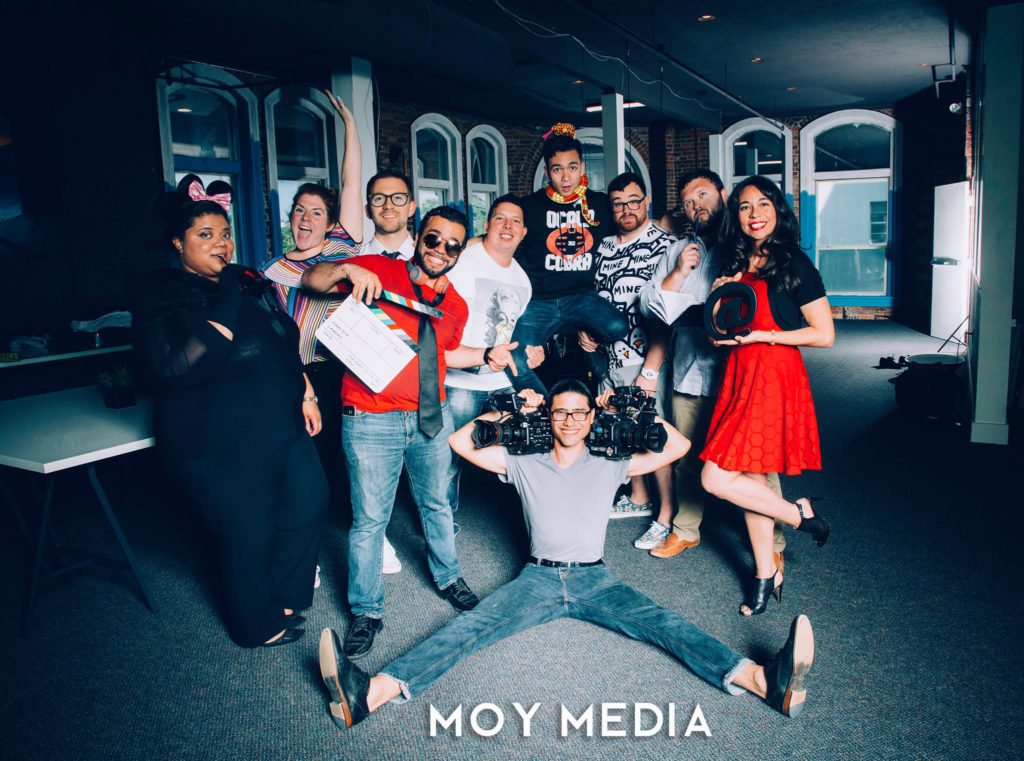 That’s How It’s Done Productions became Moy Media in November 2016, and Alex and his team expanded the business from a video production company to a marketing company. Now, Moy Media is a results-driven company that generates leads for clients through social media advertising.

“My love language is service, so I want to be able to do as much as I can for people. I just love being able to give,” Alex says. Alex notes that no one knows their business better than the owners and decision-makers, so by listening to their needs and who they target, he’s able to cater to their needs.

“If they ask for my advice, I’ll recommend a couple of ideas for social media and how to achieve different results through Facebook or YouTube ads.”

Being free, financially free and otherwise, has also been a significant driver in Alex’s success. He grew up in a modest, but very hardworking, family. As a young boy, he often thought about what he wanted to do with his life and how he would make money. Of course, when he received his first camera, it became more about how to make money doing what he loved—making films. Since then, Alex has followed his passion, eventually investing in more sophisticated equipment, one project and one piece at a time.

“I’m always broke. I make money and then invest it into something else,” he laughs, but that’s how he keeps moving forward.

Walking up the stairs to the second-story space above the old Starbucks location downtown, the conference room, cold brew coffee dispenser, open office area and overall vibe make this company’s success as a startup seem openly apparent. Alex secured this space for the company in February of this year, and members of Moy Media buzz around the office, some collaborating and others working on laptops. There are 12 people on the team now, and a day for Alex includes not only team and client meetings but employee training, too.

Alex continues to push the limits of his company and his own personal success. His goal for the business is to get to a point where Moy Media is well-known and self-sustaining. Meanwhile, he wants to inspire others to live their dreams.

Shadai Perez, a cinematographer at Moy Media, sits with Alex in the conference room. He films aspects of Alex’s life for his daily vlog (video blog).

“This guy likes to inspire people,” Shadai says. “I think that’s what keeps him going. He constantly wants to push the team. We have morning meetings every day, and [he’ll ask] ‘What can we do to make it better?’ That’s leadership, entrepreneurship. How can I push the envelope more? How can we be more successful?”

Of course, there are challenges to running a company, but Alex has a support system in place and a couple of mentors he looks to when he needs advice or encouragement. His advice for other young entrepreneurs? Know why you’re doing what you’re doing.