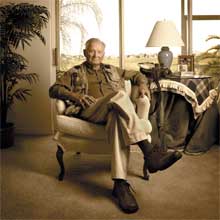 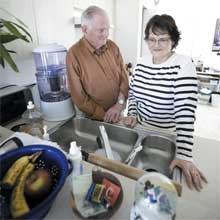 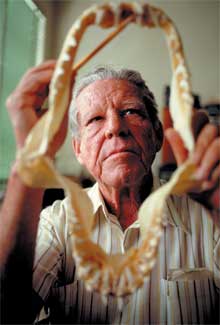 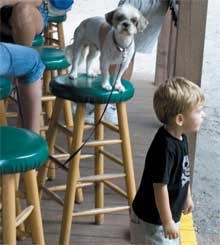 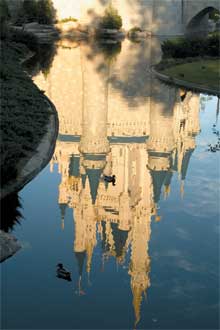 No one was probably more surprised than Carl Purcell when his stock photograph of the Statue of Liberty and the American flag was selected to be the image on the USPS First Class Stamp in December 2005. He didn’t have a stamp in mind when he combined the two photos into one patriotic image about seven years ago.

Carl’s photo of the Statue of Liberty was taken from the boat on the way to Ellis Island with a 35mm Nikon camera. He describes the wind as “blowing just right” when he shot the photo of the American flag as it was billowing near the statue on the same day.

Now that “Lady Liberty and Flag” is nearing the end of its reign as one of America’s most popular postage images, Carl says it’s been a nice ride, albeit an unexpected one.

“The Postal Service acquired the image from Corbis, the image archive on the Internet where I have about 12,800 photographs available,” the Clermont resident explains. “A friend and former colleague at National Geographic heard about it first and told me.”

When the stamp was first issued, USPS officials anticipated a rate change and issued 11 varieties of a nondenominational version. In 2006, the 39-cent insignia was added. The photo has been reproduced millions of times on one of America’s most popular postage stamp designs.

Unfortunately for Carl, the photograph was a royalty-fee image. Although the photo was used on one of the biggest printing runs in history, Carl received only $150 for the composite photograph that has become the predominant symbol for first-class postage. His other images on Corbis bring much more, depending on where and how the photos are used. One photo of palm trees blowing in a typhoon in the South Pacific netted more than $25,000 a few years ago.

The thrill of being part of philatelic history by “letting the post office borrow the image” has made up for the low compensation, says Carl, whose photographic career has taken him around the world.

The spry 78-year-old says he was destined to become a photographer. When he was 17, his father gave him a 35mm Argus camera and he remembers taking a photo of a reclining statue in a fountain at the US Capitol.

“As a surprise, my father had an 8X10 print made for me,” he says. “Seeing the details in the enlargement made a deep impression on my youthful mind.”

A few years later, his grandmother bought him a 4X5 Crown Graphic, which he took along when he was drafted into the Army. Winning first place in an all-Army photo contest set him on his career path. He attended the Army’s photography school at
Fort Monmouth, N.J., and after military service returned home to Indiana, where he finished his degree in art history and education at Indiana University.

After a stint as a newspaper photographer and reporter, Carl went to work for the National Education Association in Washington, D.C., as a staff photographer. His mission was to show the disparity between rich and poor school districts across the country. The job resulted in his first book, Teach Me, a photographic essay about teaching and learning.

His next employer, the Peace Corps, was a life-changing experience.

“That was the turning point in my life and career,” Carl says. “The day my security clearance came through, I left on a trip around the world.”

It wasn’t just the travel that made an impact on the young photographer.

“I was very impressed with the volunteers and the work they did,” he said. “And I’ve always been interested in photography as a tool for social change.”

He continued documenting social issues in his next job with the Agency for International Development (AID), where his experiences were unforgettable. Photographs of the aftermath of a tidal wave in Bangladesh, an earthquake in Nicaragua — the images are haunting.

He’s also had a few humorous remembrances along the way as he traveled to more than 100 countries as a government and then as a freelance photographer for National Geographic and other national publications. He and his former wife, Ann, also a photographer, collaborated on many freelance projects including another famous composite photo of a billowing flag and New York’s Twin Towers after 9/11, titled “Lest We Forget.”

If you are a photographer, you may recognize Carl Purcell’s name from his regular column in Popular Photography magazine called “The Traveling Camera,” which ran for many years. At that time, he never dreamed that his advice on camera equipment and film would be replaced by digital technology. He is a fast learner, though, and jumped on the technological wave long before many photographers saw it coming.

“If you don’t accept technology, it will be a steamroller that flattens you,” he says with a smile.

Today, he spends much of his free time on his computer, experimenting with Photoshop techniques and keeping an eye on where his photos appear. He travels frequently, lectures, and teaches workshops, including photo safaris to Africa.

He’s constantly amazed by the monthly reports he receives from Corbis — the image archives owned by Bill Gates.  He explains that having photos on Corbis is like having a toll booth on the information superhighway.

“Some of the license fees are far beyond my expectations,” he says. “One image was licensed twice in the same month for $22,000.”

A number of small sales piqued his interest, more than 100 at about $10 each.

“When I asked my editor at Corbis about these, he explained that these travel images had been selected by Bill Gates himself to display on the plasma screens in his home,” he says. “That was just another notch in my camera strap.”

RARE  AIR
The story behind one of the most sought-after stamps ever made.

The “Inverted Jenny” was the result of a printing error. To inaugurate the new air mail service between Washington, D.C., New York, and Philadelphia on May 15, 1918, the Post Office issued a new stamp just for the controversial 24-cent air mail rate. (Regular postage was only 3 cents). The patriotic red-and-blue stamp depicted a Curtiss Jenny, the biplane chosen to shuttle the mail.

Sheets of 100 stamps had to be hand-fed twice through the presses because of the two colors. In a rush to get the stamps designed and printed, some of the sheets were inverted and the center design was printed upside down. At least three sheets were found during the production and destroyed, but one sheet of 100 stamps got through unnoticed, making the error one of the most prized in philately.

The Inverted Jenny made news in Florida last year when an absentee ballot was thought to have been mailed with one. However, the stamp was later declared a counterfeit.