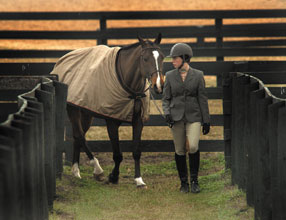 A horse and rider take a stroll through the paddocks
at HITS Post Time Farm.

Each winter, horse lovers from all over the world converge for the annual HITS Winter Circuit. The event takes place west of Ocala on US Hwy 27 on some of the most magnificent acreage in Marion County.

“There’s no other facility like Post Time Farm,” says Tom Struzzieri, HITS President and CEO. “Not only is it our largest property in the country, it’s also the most beautiful. For those who’ve never been to Ocala, the first time is usually an eye-opener. The property is spacious and comfortable, the rings and barns are some of the best in the country, and the community that surrounds the show is a horse-focused community that supports and welcomes the horse shows.” 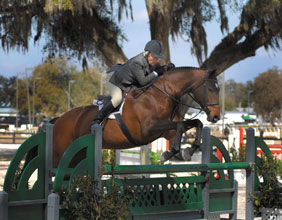 And it’s not just Post Time Farm that benefits from the winter circuit. The economic impact on the surrounding community is estimated at $50 million, which reflects spending during the circuit on food, lodging, living expenses, and entertainment in the area during the seven-week circuit.

Under the leadership of Struzzieri, a leader in the hunter/jumper equine community for 30 years, HITS has been an innovator in the industry, developing and offering new classes, leagues, and opportunities to compete. 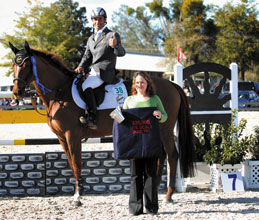 Sergio Campos on Shakira Do Jacare

Since purchasing the Post Time Farm property nearly six years ago, HITS has also invested annually in improving the show grounds. In 2007, HITS completed a renovation project that added two new rings to the facility—a new grand prix ring and a new main hunter ring—increasing the total competition ring count to twelve. Classes offered range from the Grand Prix show jumping classes to a variety of divisions for both the novice and experienced rider.

Each year Ocala’s HITS Winter Circuit attracts national and international participants from the United States, Canada, Mexico, South America, and Europe. Last year’s event featured more than 3,500 horses and 7,500 horsemen. The 10,000-plus spectators who enjoyed the shows watched as more than $1 million in prize money was awarded. 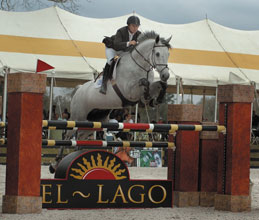 As HITS embarks on its seventh season at Post Time Farm, a former Thoroughbred training facility, the HITS Ocala Winter Circuit is more popular than ever. And those who are lucky enough to attend are in for a treat.

Plans for the upcoming winter circuit include new footing by Bart Poels, the footing specialist for the 2008 Olympic Games; remodeling of the infield area including new fencing and landscaping; application of Virkon S to disinfect all stalls; enlarging jumper rings two and three, upgrading jump styles and course decorations; plus the addition of the $10,000 USHJA International Hunter Style Challenge Derby Classic to the schedule. And this is just the beginning! 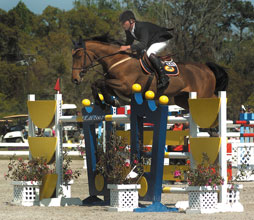 The 2008 HITS Ocala Winter Circuit kicks off with two unrated weeks beginning on January 23, followed by five weeks of AA-rated shows that begin on February 12. The circuit will end with the popular $100,000 DeLuca Toyota Tundra Grand Prix, presented by Great American Insurance Group on March 16.

HITS Ocala will also offer customers The Education Station, an on-site school. Guided by a professional teacher with over 25 years of experience, this program continues to grow in popularity as it enables students to keep current with their educational curriculum while they compete on the road.

“I’m looking forward to another winter in Ocala with all the many improvements,” he says. “The new scheduling, new footing and, of course, the added prize money is going to make it a great year in Ocala.”

After-Ring Activities
Who says all the fun needs to take place inside the ring?

The Ocala Style Award
On March 16, 2008, a special award will be given to the rider who exhibits “the best American style of riding” and possesses the “respectful, dignified, courteous, and workmanlike manner of a true sportsman.” This award, designated the Ocala Style Award for 2008, will be presented at the $100,000 DeLuca Toyota Tundra Grand Prix.