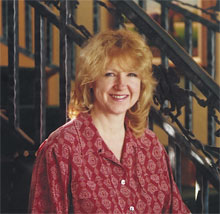 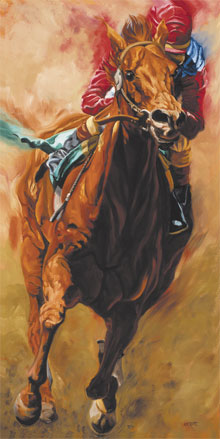 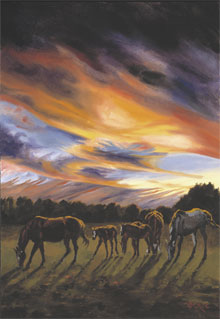 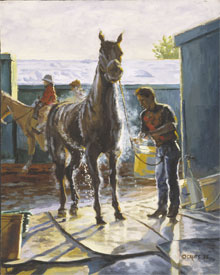 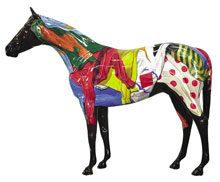 
Thoroughbred racing has long been recognized as the sport of kings, but when it comes to reigning over the world of equine painting, Sharon Crute rules. Based in the “Horse Capital of the World,” Sharon has burst forth with the determination of a filly on fire to dominate a multitude of equine exhibitions in the equine art arena. What makes Sharon’s work so unique? Why Sharon, of course.

To say that Sharon Crute is a physical painter is an understatement. Before entering her studio, one is greeted by an imposing exercise machine, replete with weights and other instruments of torture. The natural supposition might be to think that her husband, Michael Bray — a former exercise rider, jockey, owner and trainer — ventures to the inviting vine-covered veranda outside her studio for a daily workout. Think again. Each morning, before the heavy Florida dew has lifted, Sharon is already pumping up the adrenaline that she’ll be pouring on to the canvases of her bold, breathtaking racing scenes, where it’s all the painted jockeys can do to rein in their horses from galloping off the canvas.

Sharon’s knowledge of horse racing is first hand, and her paintings reflect the genuine passion she has for the sport. Like most artists, Sharon has had to do her fair share of side jobs unrelated to art. However, most all of those jobs have been related to the primary subject of her painting: horses and horse racing.

Her love of the sport and her love of her husband landed her smack in the middle of the California racing scene, where she continued working in all capacities — hotwalker, groom, pony girl, owner, trainer, and racing official. She was also in charge of program production for the California Authority of Racing Fairs.

“This was a stressful job because of all the detail involved,” Sharon explains. “It’s absolutely imperative that the information printed about each horse be 100% accurate. Otherwise, it opens the track up for a lawsuit.”

“However,” Sharon continues, “I’ve never been one who felt compelled to take up the ‘starving-artist’ routine, so I’ve always done whatever I’ve had to do to stay afloat.”

Classically trained at the Swain School of Design in New Bedford, Massachusetts, Sharon’s renderings of the vibrant world of Thoroughbred racing are not mere academic studies. Her brush strokes reflect the pain and passion of a lifetime spent at racetracks around the United States with husband Michael. Ironically, the tables have turned and Michael now represents Sharon at various art venues throughout the country.

Sharon and Michael have been a winning combination for a number of years, and their union appears to have been destiny. They had a chance meeting when Sharon was just fourteen — a mutual friend introduced them while they were both visiting a farm in Massachusetts. Fate finally reunited the duo on Mike’s twenty-fourth birthday, and they were eventually married by the racetrack chaplain at Calder Racetrack between races. That was 23 years ago.

It only stands to reason that Michael, who devoted his life to shaping Thoroughbreds as works of art, would be the natural choice to represent Sharon. Although Sharon’s masterful handling of the brush makes her painting appear effortless, painting is a lot of work.

Michael handles the business chores while Sharon focuses on color, line, and composition. In addition to marketing her work, Michael meticulously maintains quality control of all limited-edition prints by doing it himself! Disturbed by subtle differences in coloration, Michael and Sharon decided to purchase all of the necessary equipment to handle the total production process. All of Sharon’s limited editions are turned out in high quality Giclee.

Horsemen and horsewomen who are fortunate enough to flourish in Florida during the winter show and racing season will have seen Sharon’s work in Ocala’s Paddock Room Galleries. Sharon is also represented by the Galleria in Lexington, Kentucky, The Sporting Scene Gallery in Red Bank, New Jersey; and Beekman Street Gallery in Saratoga Springs, New York.

Those who navigate north during the sizzling summer to Saratoga Springs, New York will have seen Sharon’s work displayed at the prestigious August meet. At Del Mar’s Yearling Sale and Trade Show, and Vessels Yearling Sale in California, Crute’s original paintings, fine art prints, and t-shirts of racing images were strong sellers. Her work has been showcased on the covers of The Ocala Breeders’ Sales catalog and The Florida Farm Managers Directory.

Sharon is most well known for her exquisite images that grace the walls of some of racing’s finest establishments, but neither her talent nor her imagination stop there. Sharon stole the hearts of a city when she unveiled Champ. This dynamic equine image stood in distinguished company during Horse Fever, an electrifying public art exhibit of 52 life-sized horses, and came to symbolize the event itself, appearing on numerous magazine covers and brochures. Adorned with a collage of racing silks, Champ reflects the dreams of everyone to leave their indelible mark in the portals of time as a winner by whatever means used to measure personal success. Purchased by the Florida Thoroughbred Breeders’ and Owners Association, Champ continues to inspire passersby as the location’s preeminent landmark.

What’s next for Sharon? Like Stevens, Day, and Desormeaux, Sharon has her eye on the Kentucky Derby. Like a finely calibrated racehorse, Sharon is gearing up to compete for the artwork this grade-one milestone affords. As she preps, she continues to inspire lovers of color and courage with bold, emotional portrayals of horse racing, on and off the track.