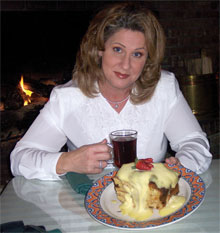 Watching restaurants come and go over the years has had somewhat of a desensitizing effect when a new one comes to town, especially as of late. Just when I’ve raved about a new one coming, a month or two later, it’s closing. One that comes to mind was Napolitano’s on Highway 27, short-lived but some of the best Italian cuisine Marion County had to offer. And then I either feel guilty or stupid that I’ve heightened readers’ curiosities only to have them drive up to a business on its way out or to locked doors.

But a new restaurant has rekindled my zest for openings, an eatery like no other in Ocala. It’s downtown on Broadway and is appropriately named Pi on Broadway.

What once was a pawn shop, several co-owners came together and designed the same area into a combination of a pizzeria, bistro, and lounge. The food is served Mediterranean-style with the expected generous portion sizes. Co-owner and Executive Chef Adam Volpe has worked at restaurants all over the country and is excited about serving international tapas (olives and cheese or fried calamari and such), artisanal sandwiches, salads, and gourmet pizzas to Ocala.

The other owners—Tom McDonald, Juan Bengoa, Jim Claeys, and Justin Albright—fabricated the two-story, Tuscan-style eat-ery (minus the ceiling on the top floor) from scratch.

“All of us are good friends and have been some time,” Volpe says of his partners. “This has been a dream of ours since way back when.”

Guests can meander to the roof, which is complete with gas torches and outdoor furniture and overlooks the streets of Down-town Ocala. Back on the first floor, casual seating, large windows, and a corner brick oven adds character to the cozy atmosphere.

“We wanted to create a warm environment where people are going to want to eat and stay awhile,” he says. “Our goal is not to turn tables as fast as we can, but to get diners to hang out and enjoy themselves on our plush furniture or upstairs on the roof after their meal.”

Another exciting eatery that has come to town—again—is Cody’s Original Roadhouse. No affiliation with the last Cody’s on Silver Springs Boulevard, John Demetriadis opened December 8, 2008, in the old Hops Grill & Brewery on SR200.

Born in Greece, raised in New York, then moved to Tarpon Springs, Demetriadis has chosen Ocala to be his latest home and business.

“I had different ideas for restaurants, but didn’t want to limit myself to Greek food only,” he says. “I worked at a Cody’s restaurant and realized for the money and portions, there’s no better bargain when it comes to the quality of food we serve.

“When I get settled,” he continues, “I plan on getting involved with the community and volunteering for some charities.”

He also said he’d like to find and support a local produce company.

Cody’s has daily specials, including a crowd-pleaser on Wednesday nights—buy one fajita, get the second free. There’s a $7.99 after-church special that includes an entrée, sides, and a cobbler dessert. And kids 10 and under eat free on some nights. Check out Cody’s website at www.codysoriginalroadhouse.com for more specials and a menu or call (352) 237-8182.

Nibbles: Congratulations to Stan and Lois on the sale of Minucci’s Pizza & Subs off of Old Jacksonville Road, which was in operation for over 25 years. Stan’s humor and sass—as well as Lois’ sweets—will be sorely missed.

What new restaurant would you like
to see come to Ocala? E-mail your response to
roseann@ocalastyle.com and
we’ll put the results in future issues.