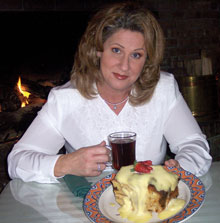 To some, Chipotle refers to any smoked chile pepper. To others, it’s a Denver, Colo.-based chain of fresh-Mex restaurants specializing in burritos and tacos. Founded by Steve Ells in 1993, the restaurant is known for its chunky guacamole and large burritos. The newest location in Clermont is at 1495 East Hwy. 50. Marketing Consultant Rusty Partch is delighted with their new restaurant as well as the city itself.

“We chose Clermont because it’s not touristy,” he explains. “The people are very friendly. We also liked the fact that we chose a town where the people not only work here but live here, unlike larger cities that are more visited than lived in.”

There’s too much to say about Chipotle to include here, but their awesome Web site—chipotle.com—covers it all. Read about their hormone- and antibiotic-free food practices and recy-cling program, as well as the company’s support of community groups through sponsorship pro-grams. You can also view the new restaurant’s layout, peruse the menu, and order online.

Pollo Tropical, a Miami-based fast food chain specializing in Caribbean food, also opened last month in Clermont at 2625 East Hwy. 50. The first Pollo Tropical opened in Miami in 1988, and now boasts over 70 company-owned restaurants in Florida as well as franchised units throughout Latin America and the Caribbean, including Puerto Rico. The restaurant is best known for its marinated and grilled chicken, served with black beans and rice. Visit pollotropical.com to view a menu.

The grand opening of Bonefish Grill in The Villages was a huge success, raising over $5,000 for the American Cancer Society. More on that in the next issue.

Nibbles: Sorrento is a tiny town in Lake County but the staff at its East Lake County Chamber of Commerce is big on promoting the area restaurants. Executive Director Pam Jennelle reported back that Gigi’s, serving traditional Italian food, is now open. She writes, “Folks here waited for what felt like forever for Gigi’s to open their doors, and now that they have, we can get everything from fried calamari to Chicken Sorrento.”

The Pizza Place, serving hand-tossed pizzas, calzones, wings, fresh subs, and salads has a new owner. They are now open seven days a week, accept credit cards, and will soon start deliv-ery service. In other news, Panda Express will be opening just outside the Target in Mount Dora. Sadly, the Mount Plymouth Golf Club has closed. Other restaurants to visit include El Mercadito and Lisa’s Country Café, both in Sorrento.

Call the East Lake County Chamber at (352) 383-8801 or visit elcchamber.com for more informa-tion about these restaurants.

Roseann founded Restaurant Guide USA and
still enjoys writing about new and upcoming eateries.
E-mail roseann@lakeandsumterstyle.com if you see or
know of any new restaurants coming to your area.