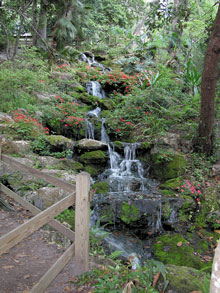 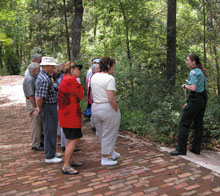 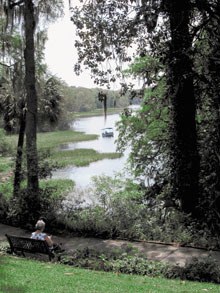 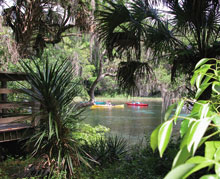 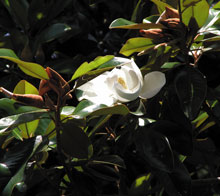 A day at the springs can leave you feeling refreshed and exhausted at the same time. For the outdoor lover, the activities are limitless.

My boyfriend, Andy, and I arrived at the park early, wanting to make a full day out of our trip. It was hard to decide what to do first — visit the spring for a cool dip, meander toward the rushing waterfalls or make an attempt at kayaking. After a short deliberation, the sound of the waterfalls overwhelmed our other choices.

As we made our way down the old-fashioned brick walk, surrounded by chirping birds and lush greenery, the sound of splashing water grew louder. Rounding a bend in the path, an impressive waterfall came into full view, making me feel like I was exploring the forests up north.

After speaking to one of the park volunteers, I was surprised to learn the falls were man-made. They were constructed in the 1930s when Rainbow Springs was operated as a theme park.

Gazing into the water, it’s impossible to tell the falls weren’t created naturally. The water dances off the protruding boulders, eventually spilling to the winding creek below. Leaning against a wooden fence, we stopped to snap a few photos of the picturesque scene. Taking a moment to look around, I couldn’t believe I’d never visited this park before. I’ve lived in Ocala for 15 years — how did I not know this hidden gem was just 30 minutes down the road?

Andy and I explored each winding path, discovering natural beauty around every corner. Exotic flowers, trees and butterflies can be found throughout the many trails. Marilyn Budney and Patty Wiese, visitors from Milwaukee, Wisconsin, were equally impressed with the park.

“This is one of the prettiest places I’ve ever seen,” Patty said. “It’s so well-kept. The rangers are very helpful and answered all of our questions, too.” Marilyn echoed Patty’s sentiments, and commented that she thinks the park is beautiful and the “waterfalls are spectacular.” Both ladies also observed that so many volunteers, known as the Friends of Rainbow Springs State Park, work hard to keep the park clean and inviting.

“It’s hard to find people who are willing to give up their free time to volunteer for something,” Patty said. “Everyone we ran into was very informative and kind. We asked a volunteer if there were alligators in the park, and he was more than willing to take the time to speak with us. He said while it was possible, it was very unlikely. The cold water and splashing people make the area unfavorable for gators. Guess we’ll have to see one somewhere else.”

After saying goodbye to our new friends and a few more hours of sightseeing, it was time to get wet! With a photo ID and a $25 refundable deposit, visitors to the park can rent kayaks and canoes, including the new clear-bottom kayaks for just $6 an hour. The cool water, which averages between 68 and 72 degrees year-round, is invigorating, the perfect way to cool off from the hot sun.

Without having time to try all the activities offered, we had to make a decision. Would it be kayaking, canoeing, swimming or snorkeling? This particular day, our curiosity for the clear kayaks got the best of us. For those of you who are unfamiliar with the trials of kayaking, let me enlighten you.

When I first sat down in my kayak, I felt that I would surely tip over. It was a challenge to work the paddle back and forth and go straight, instead of in a circle. We were shown how to safely get in and out of the kayak, and how to correctly move the paddles. I guarantee that knowing the proper way to maneuver the paddles makes all the difference in the world! After our short lesson in kayaking etiquette, and a lot of laughing, we were both gliding over the top of the water like pros.

If you’ve never been to a natural spring, you’re missing out on something special. The crystal clear water is home to an abundance of wildlife, including various birds, fish, turtles, and otters. Peering into the water, you can see straight to the bottom of the river. Obviously having a clear-bottomed kayak made it that much easier to see below the water’s surface. Sailing over the water and looking down, I was witness to nature at its finest. The springs bubbled furiously as turtles and fish swam in, only to be pushed out by the force of the water. Rainbow Springs is a First Magnitude Spring, meaning it produces approximately 500 million gallons of exceptionally clean water each day.

As I worked my paddle from side to side, a large turtle swam directly below my kayak, causing much excitement as I fumbled for my camera. I haven’t gotten that roll of film developed yet, but I hope the picture comes out!

By the way, kayaking is hard work! Especially when attempting to go against the river’s natural current, it’s certainly a good workout. Our trip took about three hours and brought us to parts of the river we wouldn’t have been able to explore on foot.

Being out on the water, I felt relaxed and carefree. Other visitors in canoes and kayaks waved as we passed. It’s very hard not to appreciate nature when you’re surrounded by it. The sights and smells were energizing and made me acutely aware that I don’t spend nearly enough time outdoors.

Once our shoulders were sufficiently sunburned and our arms felt heavy, it was time to head back to the dock.

So much physical exertion can really work up an appetite! After turning in our kayaks, we headed back to the concession area. I saw a corndog on the menu and knew that’s what I had to have. I hadn’t had a corndog since I was a kid, and it was every bit as good as I remembered. Andy went for the all-American choice of a burger and chips. The food was great and the scenery even better.

A covered area with tables overlooks the springs, giving a panoramic view of the park. Following lunch, we investigated a little further, making our way to the native flower garden. The flowers not only looked beautiful, but gave off a heavenly scent as well. The sweet aroma of honeysuckle tickled my nose. My only complaint? I’m afraid of bees. But what’s a flower garden without a few bees, right?

After a full day of exploring, dinnertime was creeping up on us; it was time to go home. We were both tired and ready for a nap. Following a quick stop in the gift shop, it was back to the car. On the way home, Andy commented that he really enjoyed the park and that we needed to go back to try snorkeling. I replied, “Now that we know it’s here, we’ll definitely make a point to come back.”

By the time we arrived home, our next trip to Rainbow Springs was already planned.

Karin Fabry is the assistant editor of Ocala Style magazine. She received her bachelor’s degree from the University of Florida. Her interests include music, movies, art, animals and spending time with family and friends. She can be reached at karin@ocalastyle.com.