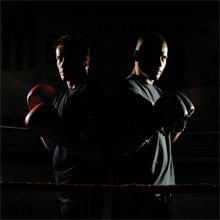 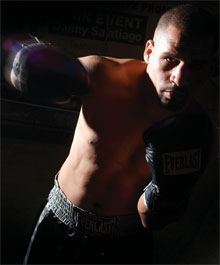 Local business-owner Guy Lemieux jokes that he always thought he was in shape. That is, until he began boxing.

“After about a minute of boxing, it’s easy to realize that you really aren’t in shape,” he laughs. “About a year ago, I hired an employee who was training with local boxer Danny Santiago. I went one day to the gym to watch them work out and I began sparring with them. I think Danny saw that I might have some potential in the ring. It was a great way to get in shape,” Guy continues. “I never really took it that seriously, though.”

That all changed when he agreed to take part in a very special boxing match to benefit the United Way of Marion County.

“Now I have to take it seriously,” Guy says. “I’ve never fought a real match, only sparring where we simulate a match. In a real fight, someone is trying to knock you out. I intend to win, though.”

Today, Guy spends an hour each morning training in the gym before work. After work, it’s another two hours in the gym, followed by a two- to four-mile run with his wife. Not bad for a day’s work.

Of course, Guy should have nothing to worry about, he’s been training under Santiago, a nationally-ranked boxer, along with Jeff Pickmore of Compass Gym and Jeff Ferrell, a talented boxing coach. And it’s all for a good cause.

Although he was born in New York, nationally-ranked boxer Danny Santiago has called Ocala home for more than a decade. Today he runs Heart and Soul Fitness and Boxing, located in the Adult Education Center.

“A better life brought my family to Ocala,” Danny says. And because of all the support he’s received from family, friends, and the local community, Danny does what he can to give back to the community that he’s come to call home.

With aspirations of become a boxing promoter, Danny says he jumped at the chance to help organize the August 12 show.

“It’s a very worthy cause,” he says. “We have everything in place to pull off a very successful show.”

Planned in just under three months, the event promises to be fast-paced and adrenalin-filled. The show will consist of four amateur and eight professional boxing matches. Danny Santiago will be competing for a World Boxing Council Continental title. If he wins that title, Danny, who is currently ranked in the top 15 in all sanctioned boxing organizations, would be awarded a prestigious ranking in the top 5.

“I’m very fortunate,” Danny says. “God-willing when I win the Continental Title, I’ll get a chance at a world title.”

Danny, who grew up in New York, describes himself as “living proof” that hard work and dedication pay off in the long run.

“When the kids come into the gym and see my success, they realize that anything is possible,” he says. “I was a city kid getting into mischief when I was younger. I’m a living example that things can turn around. I don’t drink, smoke, or hangout in the streets. I’m just a regular guy who boxes.”

Danny attributes his success in life not only to a wonderful family upbringing, but also to boxing.

“You have to be very determined and very disciplined to be successful in boxing,” Danny says.

That’s a fact that Guy Lemieux has come to agree whole heartedly with.

“Boxing has taught me how out of shape I was,” he says. “It’s one of the few sports in the world where one person has to play offense and defense at the same time. A boxer has to be in tip-top shape. One of the most important things in boxing is to be able to not only throw a punch, but to know how to avoid them as well.

“It’s going to be a great night,” Guy says of the August 12 event. “Danny is such a nice person and the fact that he’s going to be fighting in a title fight is a huge draw. Neither one of us plan on losing.”

“I hope everyone comes out and supports the event,” Danny adds. “Those who come will see a brighter side of what boxing is all about and what it’s trying to become.”