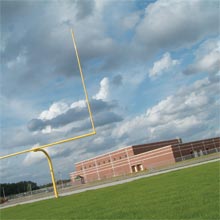 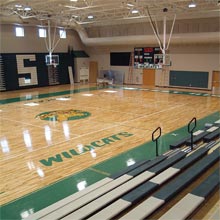 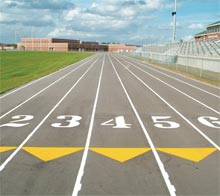 By now, rush hour drivers along Southeast Maricamp Road are all too familiar with the “red” of a new traffic light. What may not be as familiar is the “green” of a new forest, a new Forest High School now filled with over 2,000 students and teachers. The new $40 million school officially opened on January 18. It replaces the old Forest High built 49 years ago as Ocala High School.

“It’s a beautiful school and I’m happy to open it to our community,” Principal George Tomyn told me recently. At the helm of Forest High since 1996, Tomyn regularly walked the old 10-acre campus along Fort King Street talking with students. The new campus is eight times bigger and boasts significantly more classroom space, but Tomyn says he’ll continue his face-to-face interaction with kids all over the school.

It’s a large campus and Tomyn has a lot of ground to cover, but he likes the personal interaction, getting to know kids at their level instead of when they’re in his office.

“I think our students and our entire school community will be very proud of their new home,” he says.

Tomyn admits the process hasn’t been easy, and plenty of challenges have thrown stumbling blocks in the way. However, Forest staff had plenty of input with district officials and architects to design a school to meet the needs of students in the 21st century.

Moving mid-year has been tough, too, but Tomyn points to good communication and a hard-working staff for making the move successful. Once everyone’s settled in, he says, the moving experience will pale in comparison with their new home.

Although the move begins a new chapter in his life and that of Forest High, Tomyn smiles when he looks back on his FHS experiences,

“I will always remember the friends I made with students and staff during my three years at the old school [he’s a ’72 FHS graduate]. Now, as principal, I’m enjoying the challenges presented in this move, [but] I’m most thankful for a dedicated staff and the great teamwork that everyone has displayed.”

Nuts And Bolts (And Lots Of Bricks)

From Maricamp Road, the two -story main building is massive, covered in countless large red brick with strong column-like features. It’s very much traditional by design, something school board members wanted from the start. Just inside the front doors is an impressive lobby area complete with individual offices for most school administrators and support staff.

Beyond this office area is the focal point of the building — a three-story rotunda where four footpaths of direction intersect. At the top of the rotunda you find small square windows for natural lighting. Looking down from the second story, green and beige-speckled tile defines the rotunda floor, and lighter tile lines the four hallways leading to it. The rotunda is a feature no other high school in Marion County has and one Forest will likely become known for.

Step out the back doors and you enter a fully landscaped courtyard hundreds of yards long. It’s flanked by a 23,000 square foot cafeteria complex with a culinary arts lab to the left, an indoor gymnasium straight ahead, and a performing arts auditorium and music suite (with separate choral and band rehearsal rooms) to the right. These three areas have separate access for after-school activities and community events.

The backside of the campus houses what Forest High has always wanted and never had until now — athletic facilities to call its own. These include an outdoor football and track stadium and sporting fields for physical education, baseball, and softball.

Except for a 16-classroom wing addition expected to open this August, construction on the new campus is complete.

While administrators and support staff guide everyday school life, students are the ones who define a school. So I sat down with members of the Forest Class of 2005 for their take on their new Wildcats home.

Caroline Robertson, an 18-year-old senior and four-time All-American swimmer, admits she’s sad leaving behind the familiar campus for something brand new. With lots of memories in the halls of the old Forest, she compares moving in terms of something she knows well — medals for great achievement.

“This is now the ‘gold’ part for Forest High School. We’ve been at the silver part for so long,” she says. “We don’t just want to put the silver behind us. We want to take it with us and bring out the best of the old Forest at the new Forest.”

Fellow classmate and SGA (Student Government Association) President Mardi Yandle feels the same and has shared the feeling countless times while leading underclassmen on tours of the new school.

“Old school traditions, new school transitions. It will be a better foundation for Forest. Here [on the old campus], things are old and sometimes fall apart. It’ll be a new productive start, a fresh outlook, a new approach,” she says.

Students will likely be the ones noticing the biggest physical difference between the two campuses — enclosed hallways. While the old Forest offered outdoor walkways from building to building, the new Forest features white walls, air conditioning, and distant views of the outdoor world. It’s okay, though, for Caroline.

“When you change classes, it’s like an adventure. At the new school it won’t be as exciting, the break between the classes. It’ll be the three-second walk.”

“I like how beautiful it is,” says Emily McCollum, another member of the Class of ‘05. “It’s the TV school, the one you see on every television program. We’ll be like freshmen again finding all our classes, but I’m excited about it.

“It’s not what we’ve had in the past and right now it’s sterile because nothing’s on the walls,” Emily adds. “We haven’t had the chance to leave our mark yet, but we will,” she says with a big grin.

Leaving a mark shouldn’t be too hard for the first graduating class of the new Forest High, especially when it comes to Wildcat pride.

“I think there will be a lot more school spirit with the sports fields and the air conditioned gym,” says 17-year-old Lauren Harper, a former cheerleader and class representative.

Some of you reading this story right now may be experiencing some of that school spirit. Generation after generation call Forest High their alma mater. The school’s developed a strong family legacy over the past five decades. Don’t worry — it’s not disappearing just because there’s a new home for it. In fact, students are the first ones to accept the challenge of carrying on the Forest tradition wherever they find themselves. Even on a new campus.

“After a month or so, people will understand the change and will adapt to it,” Caroline says. “Change is good. Well have to change anyway in six months [for college], so this is a good chance to grow and learn.”

Not bad for an old legacy at a new school.

The new Forest High School is a massive campus. How big? In all, it’s eight times larger than its former home on Fort King. It has: