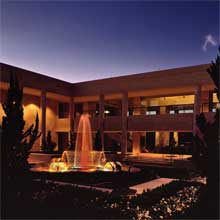 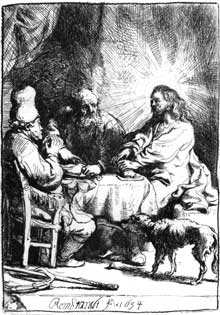 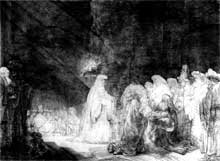 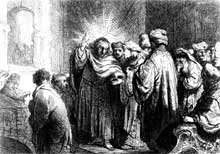 Dr. Robert McClary could smell a rat. He spotted one, too, the moment he stepped into the quiet nook off the main lobby of the Appleton Museum of Art.

In Rembrandt’s 1632 etching The Rat Killer, the wiry-whiskered exterminator stands with slump-shouldered resignation as he completes his nasty bit of business.

Turns out, The Rat Killer — this particular rat killer at least — is a forgery. A fake. One of two purposely planted in the exhibition among the exquisite collection of Rembrandt prints that McClary and his wife, Mariann, have collected for more than a decade. Make no mistake — the McClarys’ prints are the real deal, including Christ at Emmaus, the only etching in the collection printed during Rembrandt’s lifetime and one of a dozen on display at the Appleton through the end of December.

McClary acknowledges that, while he knows enough to pick out the forgery now, he didn’t know much about the art form back in the early 1990s when he noticed his first Rembrandt etching, The Golfer, at a gallery in Pebble Beach.

“I knew who Rembrandt was, of course, and I was just massively impressed that anybody could buy anything from his hand,” McClary recalls.

Purchasing The Golfer piqued McClary’s interest enough to read about Rembrandt in general and his etchings in particular. The McClarys have been collecting ever since.

Dr. Leslie Hammond, the Appleton’s chief curator, contacted the couple nearly two years ago, after a museum board member mentioned the collection.

“I thought to myself, ‘This is perfect.’ We have Rembrandts in our own back yard and someone who’s willing to share them with the community,” says Hammond.

The timing for an exhibition was also perfect as a way to join the yearlong, worldwide celebration of Rembrandt’s birth, offering what Museum Director Robin Muse McClea says is “a wonderful opportunity for many to see examples of this great artist for the first time.”

Rembrandt Harmenszoon van Rijn was born on July 15, 1606, near Amsterdam. Perhaps more widely known today for his paintings, Rembrandt’s work was diverse and prolific — about 400 paintings, 1,000 drawings and 290 etchings. McClea says that each is remarkable for its use of line, light and dramatic composition, which Rembrandt used to “capture emotion and tell a story.”

The meticulous and miraculous prints in the McClary collection depict the sacred and the sordid of Rembrandt’s world — a world inhabited by golfers, physicians, print-sellers, beggars and, yes, rat killers — turned to dust long ago. Yet, it remains vividly alive through his undisputed genius with copper plate and needle.

Etching is a form of intaglio, one of four basic printing techniques. To create an image, metal plates, usually copper, are covered with an acid-resistant resin or “ground,” which is scraped away when the artist “draws” on it with a sharp needle. The exposed lines were then eaten away or etched when placed in an acid bath. The plates are then inked and wiped, leaving ink in the grooves created by the acid.

Rembrandt experimented with technique beyond the traditional hatching and crosshatching of his contemporaries to infuse his etchings with brilliant use of chiaroscuro (light to dark) effects.

Filippo Baldinucci, whose Cominciamento e progresso dell’arte dell’intagliare a rame was one of the first general histories of engraving, wrote of Rembrandt, “What was really outstanding about this artist was a very curious way he invented of etching in copper; it was wholly his own — with certain strokes and irregular stretches — fully highlighting a deep chiaroscuro of great vigour.”

In Cominciamento, published less than 20 years after Rembrandt’s death in 1686, Baldinucci concluded, “Let the truth be known: in the art of etching Rembrandt was much more praised by the professors of art than for his paintings, where it appears he was more fortunate than excellent.”

Rembrandt’s reputation was earned both for his own skill as well as for the evolution of the work of his peers and followers — including the 17th century artist who forged The Rat Killer.

“You know, I love the picture. It’s a great picture. It absolutely looks like a Rembrandt,” McClary said. “I guess it just demonstrates there was money to be made even way back when.”

Though he can eagerly and accurately tell you how to spot the forgeries, McClary doesn’t want to spoil fun others may find in sleuthing out the second fake.

Quietly and on his own, McClary has slipped into the museum at least three times since the exhibit opened in September to view his own collection. And with each visit, he manages to find something new that he hadn’t noticed before.

“So much more stands out to me, just how meticulously well done they are, all the fine little subtleties that you see,” he says. “There’s a lot going on in every one. You can see their expressions, you can read their emotions.”

The intimate scale of the exhibition invites museum visitors to get up close and personal with each print, lingering over details rather than just giving them a passing glance.

“You’ve got to spend a couple minutes on each one, looking at all that’s going on,” says McClary. “And then think back at how old they are.”

Rembrandt Prints from the Collection of Dr. Robert and Mrs. Mariann McClary
Through December 31, 2006
Appleton Museum of Art
291-4455
appletonmuseum.org

What’s Happening at the Appleton?
Tapestries: Picasso, Calder, Matisse and Other Great Century Modernists along with Connecting Threads: the Carter Collection of Pre-Columbian Peruvian Textiles (through Jan. 7, 2007). The grand tapestries brought together by the Trust for Museum Exhibitions offer a fresh perspective on 20th century modernism and its intriguing relationship to the time-honored tradition of weaving. That tradition harkens back centuries, as evidenced by the complex and intricate techniques developed by the ancient Peruvians on display in the concurrent Carter collection exhibition.

A Special Evening With Col. Matthew Bogdanos (Jan. 19). Author of the bestselling Thieves of Baghdad, as he offers a riveting account of the U.S. Marines mission he led into the Iraq National Museum to rescue world-renowned treasures stolen during the fall of Baghdad. Proceeds support conservation and preservation of the Appleton’s permanent collection. Tickets are $75 per person for reception, lecture and book-signing; $250 per person or $400 per couple for reception, lecture, book-signing (book included) and VIP dinner with the colonel.

For information about these and other offerings, call the Appleton at 291-4455.