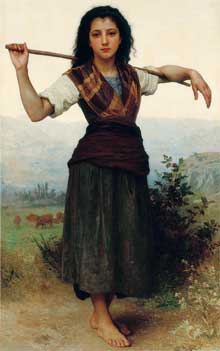 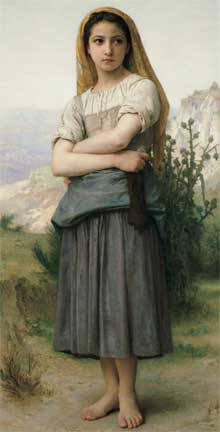 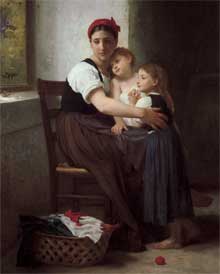 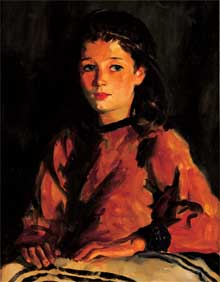 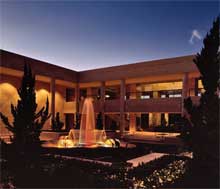 In town recently to visit her mother, Day decided to stop by the Appleton Museum of Art before returning home to Miami. She took in the museum’s permanent collections, strolling comfortably around the galleries in no particular hurry. Then she bumped into something completely unexpected: William Bouguereau and his American students.

“In my entire life I’ve never seen a collection so rich,” Day said as she stood before The Storm, a massive canvas by Pierre-Auguste Cot, one of Bouguereau’s early students. “I’m in love with this; it gives me goosebumps all over.”

And then, before moving on to the next painting in the exhibit, Day said she just might have to move here if this was what Ocala has to offer.

“I had no idea whatsoever this is what I’d find,” Day said with a pinch-me-I’m-dreaming expression. “I mean, I never even heard of Bouguereau, but this really inspires me.”

Actually, Bouguereau gets that a lot.

History, it seems, has been less kind to him than to his 19th century contemporaries. Though he doesn’t now enjoy the same kind of name recognition, in his day Bouguereau held more sway than Renoir, Degas, and Monet and was considered one of the world’s greatest painters.

Bouguereau’s romantic genre and mythologically themed paintings were not only commercially popular, but were exhibited in the annual Paris Salons for nearly 50 consecutive years.

Thousands of accomplished artists flocked to Bouguereau’s Paris studios, hoping as much to bask in his reflected glory as to earn their technical stripes. Among them, many who would go on to become influential leaders in American art.

Bouguereau’s ultimate skill as an artist — despite the vagaries of public opinion — and his fine reputation as a mentor led to the creation of In the Studios of Paris: William Bouguereau and His American Students.

Organized by The Philbrook Museum of Art in Tulsa, Oklahoma, In the Studios will remain at the Appleton through May 27. It is not the first retrospective exhibition of Bouguereau’s work, but it is the first to focus on Bouguereau’s larger-than-life personality and the generation of artists he trained in his own atelier (artist’s studio) and French academies.

Three years in the making, the exhibition brings together 55 paintings and drawings from 30 institutions, including the Metropolitan Museum of Art, the J. Paul Getty Museum, and the Appleton, which is one of only three museums on the national tour.

“We wanted to do something special. My idea for this year, exhibition-wise, was to highlight our permanent collections,” says Hammond. “With our academic art being the most important collection we have, what better way to kick off our 20th anniversary year?”

Bouguereau is, in fact, the Appleton’s flagship artist and The Young Shepherdess, purchased by museum founder Arthur I. Appleton in the 1980s, has always been on the cover of the Appleton’s collections catalog.

Hammond also said she hopes In the Studios will raise awareness of the Appleton’s permanent collection, which includes three Bouguereaus as well as two Cots and the lyrical Daphnis and Chloe by Elizabeth Jane Gardner, an American who apprenticed with Bouguereau and became his wife.

Gardner’s painting, as well as Cot’s Le Printemps (Springtime), are included in the national exhibition.

“Our permanent collection is really special and really very important,” says Hammond. “This is a situation where the exhibition we’re bringing in is highlighting our own collection.”

James Peck, the curator for In the Studios, was well aware of the Appleton’s collection from his days studying art at Florida State University.

Peck said the fact that Bouguereau is not as well known as other 19th century artists is not surprising, given that the French academic master (1825-1905) hit his prime just as the academic tradition he followed gave way to the bold, new age of Impressionism.

As a student at the Académie des Beaux Arts in Paris, where he won the coveted Prix de Rome in 1850, Bouguereau was by temperament and training the very embodiment of 500 years of Renaissance tradition — think Leonardo, think Rembrandt, think Raphael — which Peck said was not exactly a “great incubator of innovation.”

“He was an artist you probably didn’t hear a lot about because the victors write the history books and Impressionism won the day,” Peck says. “I think in a sense, the critics wanted him to take a stand and be more bold, but he didn’t. There wasn’t a lot of variation stylistically.”

In fact, critics have faulted Bouguereau for his very faultlessness, or as Peck states, “There was almost a sense that he was too good, that his level of skill was almost unbelievable.”

But what’s significant, Peck says, is that Bouguereau and his generation of academic artists “were the teachers of all of Europe and essentially all the world.”

Paris in the 1880s was the epicenter of the artistic world, with upwards of 10,000 artists working, studying, converging on the Louvre to eke out a living by copying works of art for American tourists, and vying to have works accepted in the annual Salon.

In his studio, as well as the private Académie Julian, Peck said Bouguereau was a “very kind, honest, giving teacher who took the job of teaching very seriously.” The artist operated what amounted to an artistic boot camp. Instruction centered on the study of live, nude models, and the lessons were pragmatic, if tedious and unremitting.

Appleton Director Robin Muse McClea says French academic art remains accessible today because of its realism and beauty and that In the Studios represents “all of the rules the classically trained artist must learn before they can be broken.”

In the Studios can be viewed in a sequence of three galleries. The first features Bouguereau’s paintings; the second, works by Bouguereau and Gardner; and the third, works by his other students.

And what does Hammond hope visitors will say as they enter the galleries? “‘Oh, my gosh, these are beautiful,’” Hammond says. “Something as simple as that.”

What Else Is Happening At The Appleton?

Appleton After Hours (April 5).
Features top jazz pianist Lenore Raphael with catering by Felix’s and nonprofit event partner, the Humane Society of Marion County. Admission is $10 for the public and $5 for members. Drink and meal tickets are available. 5-9pm.

The Appleton Museum of Art: 20 Years of Collecting (June 16-Sept. 16).
This exhibit is a celebration of the Appleton’s 20th anniversary, with pieces selected by popular acclaim from the wealth of museum donations and acquisitions throughout the years. The exhibit will highlight familiar objects as well as those never before seen by the public.