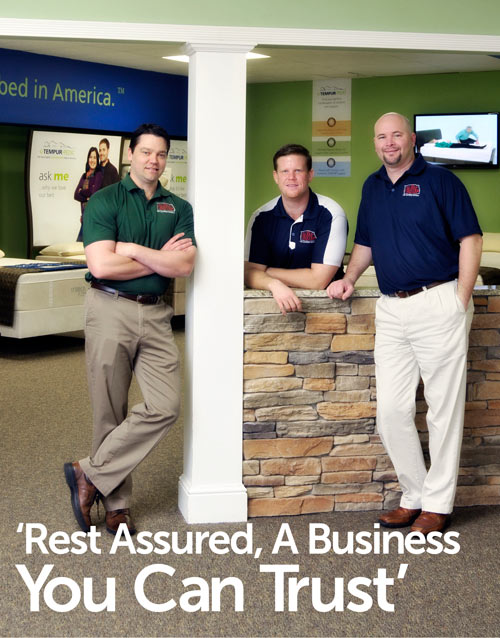 Steve Branham and Chad Pelt are now the proud owners of four Sleep Centers and the Mattress Liquidation Center for a total of five stores that dominate our area.

In 1998, Steve went to work for his brother who owns a Sleep Center in Panama City. Four years later, he was ready to go into business for himself. At the same time, Chad was feeling the need for a change in his life also, so the two decided to partner and make the leap together.

“It was a huge gamble,” Chad remembers. The young husband and his wife had recently welcomed their first child, and the comfort of a steady paycheck was hard to give up for the uncertainties of owning a business.

“It was rough in the beginning,” Steve adds. “We went about a month and a half without a paycheck and ate a lot of Ramen Noodles.” 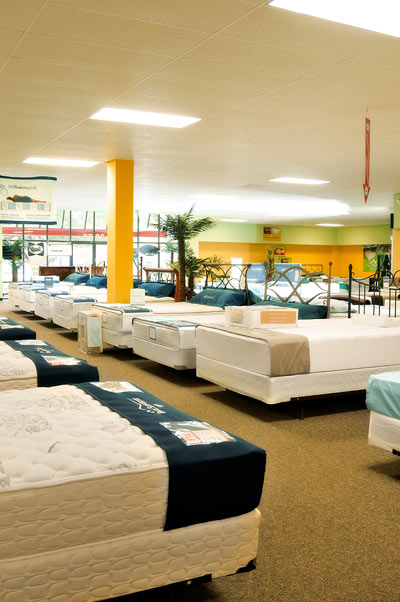 Their days were long and hard and involved performing all business operations themselves, including delivering the beds before and after the store was open. The first store opened in a 4,000-square-foot building on Highway 441 in Ocala, which they completely renovated, with nothing more than a 2,500-square-foot showroom to display their products.

“We’re not high pressure,” they agree. “It’s not about sales. It’s about helping people sleep better, which allows them to live better,” says Chad.

And it’s that desire to help people that has made their business such a success. As the company expanded, so too did the need for more space. Chad and Steve moved to a larger and more visible location on Highway 200 in 2004. In 2005 they hired Brent Spaulding, who advanced from a sales position, to store manager and now the district manager. Seeing the hard work and dedication pay off, he plans on continuing the tradition by opening his own store in the near future. By the end of 2007, there were three stores total. In the midst of the recession, the fourth store was opened in November 2009 and the fifth in May 2010.

Providing exceptional customer service has been the staple of their business and is one of the primary factors that has attributed to their growth.

“We aim to allow the customer to determine what is best for them, without the high pressure,” Spaulding says.

“It truly makes a difference to have a staff that knows how to treat a customer,” says Lori, a customer from Ocala. You can read all of their testimonials on their website.

The Sleep Center offers the most extensive selection of the top name brands under one roof, including Sealy Posturepedic, Simmons Beautyrest, Stearns & Foster, Tempurpedic and many others.

“We try to carry a complete selection from each of the major brands to give consumers plenty of choice,” Branham says.

Recently Sleep Center was given the highest industry honor, being internationally recognized in an industry-insider publication for outstanding sales customer satisfaction.

“It’s so important to do all you can to satisfy the customer. It leaves a lasting impression,” Steve adds. “We are very progressive and we’re always tweaking things to help people get the best value possible.”

The Sleep Center has the strength of a franchise, yet it’s locally owned and operated. This provides national group buying power without sacrificing the local personalized service Ocala has come to know and trust. Even though the business has been a huge success, these owners remain grounded.

“The money stays in Marion County. We’re local, our kids attend Marion county schools and we’re a business you can trust,” Steve says proudly. “So come on by and take a nap!”