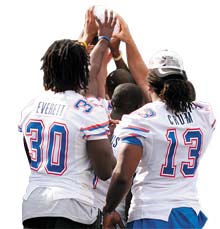 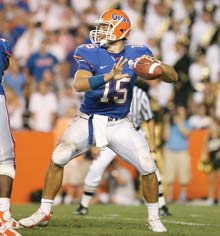 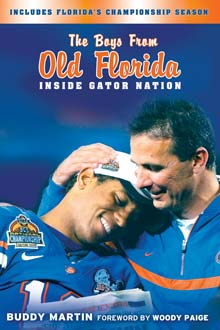 More than any team in Southeastern Conference history, Florida was the face of league championship games. However, after a flurry of five SEC titles in six years and six in nine seasons, there had been a bit of a five-year drought in Gainesville. The national championship game wasn’t yet on the radar screen and the likelihood of the Gators leapfrogging USC and Ohio State was virtually non-existent. It appeared as though just the Sugar Bowl berth would be at stake when Florida (11-1) and Arkansas (10-2) teed it up at the Georgia Dome on CBS. This would be the Gators’ eighth appearance out of 15 title games and they were only a slight favorite — about a field goal — in their first shot at a conference title since 2000.

It fell to Meyer to restore the roar in “The Swamp” and get the Gators back to the land of peaches and pecans. In only his second year, the former head coach of Bowling Green and Utah rang up an unbeaten record in the SEC East and at home. Those accomplishments, coupled with Meyers’ first-year mark of 9-3 at Florida, gave him the best two-year start of any Gator coach in history.

There was a glimmer of hope that if the Gators could win convincingly over the Razorbacks they might garner some so-called “style points” in the BCS Standings. It was only a small glimmer, however, as they were currently fourth behind Ohio State, USC, and Michigan, trailing the Wolverines by only 51 points. So it was entirely possible that an SEC champion with a 12-1 record — a road loss to Auburn on a controversial call by officials — would not play for the national title. The best that Jeremy Foley could hope for would be a Sugar Bowl berth and BCS playoff again — who knows? — a two-loss Notre Dame?

A bit of a football miracle was about to unfold, proving Steve Spurrier’s prediction of “The Year of the Gator” to be prophetic. The Florida Gators won the 2006 Southeastern Conference championship, beating Arkansas 38-28, and discovered after the game that they had gotten help from the UCLA Bruins, who upset Southern Cal.

Meyer took a little shot at the network that I had nicknamed “The ESPN/ABC Cartel in Bristol, Connecticut.”

“ESPN is a powerful, powerful organization,” Meyer said,  “and I hope they list all the statistics.”

They wanted style points? The Gators’ defense made big plays, the special teams came through with a touchdown, and the old-fashioned razzle-dazzle provided the clincher. In a crazy night on the floor of the Georgia Dome, the Gators used trickeration, guile, and guts to roll up 396 yards of offense, perhaps silencing the critics who said Meyer’s offense was too stuffy. As he said, he took every shot, including a successful fourth-down fake punt in his own territory, after which Urban would jest, “Shelly called that one.”

Watching a 17-0 lead melt away at a time when everything was falling apart around him, Meyer gambled on fourth and 10 with the handoff by punter Eric Wilbur to Jemalle Cornelius for the first down. Wilbur took the snap start to his right as he often did when using an end-over-end rugby kick, but this time he flipped it unexpectedly to Cornelius who was going the opposite way. With a block by fullback Billy Latsko, Cornelius got it down to the Razorback 32. But the Gator offense sputtered, falling back to their own 42. It seemed as though Cornelius ran 50 yards, over to Marietta and back. Ironically, it didn’t produce any points.

Until the fake punt, it was beginning to appear that Florida’s dream for a title shot was going to melt away on the artificial turf of the Georgia Dome. It looked like a repeat of the second-half fizzle at Auburn earlier in the season.

Spectacular though the fake was, Florida was unable to cash in and had to punt. For just a moment, Meyer contemplated more trickery, but at the behest of his co-defensive coordinator, Mattison, who admonished his boss that “there’s a lot of football left,” the skullduggery wasn’t invoked. This time, Wilbur punted it, but there were fireworks on the other end when the Hogs’ Reggie Fish foolishly tried to field the ball near the goal, bobbled it, and was out-scrapped by an alert Wondy Pierre-Louis, who pounced on the ball for a touchdown, actually beating Fish and two teammates to it. After the extra point by Chris Hetland, the Gators owned the lead, 24-21.

On the second play of the fourth quarter, Percy Harvin streaked 67 yards for a touchdown. The Florida Gators were knocking on heaven’s door. It fell to the defense to seal the deal. The brilliant run defense strategy of Greg Mattison and Charlie Strong was augmented by the stellar play of Chuck Heater’s and Doc Holliday’s secondary. Reggie Nelson and Ryan Smith provided exclamation points with a pair of interceptions. A defensive juggernaut may have been born right there.

Almost overshadowed was the fact that Chris Leak, who passed for 189 yards and one score, reached the 11,000-yard passing plateau and 89 career touchdowns. Harvin, with 105 yards on six carries, was unanimously voted the game’s most valuable player. That MVP award could easily have gone to Brandon Siler, who posted nine solo tackles and 12 total.

By virtue of UCLA’s 13-9 upset of No. 2 USC, the No. 4 Gators would need help from the BCS computers, USA Today Coaches Poll, and the Harris Poll to get the points needed to overtake Michigan, advance to the second position, and get a crack at No. 1 Ohio State in Glendale on January 8.

Florida or Michigan? A Big Ten rematch or the 12-1 SEC champion against Ohio State?

It was left to a bunch of coaches, a mixed bag of football types, and a bank of computers to determine whether the Florida Gators were going to get a chance to play for the national championship. With USC beaten 13-9 in an upset by UCLA, the back door opened again, almost like it did 10 years ago for Florida in its first national championship season.

The Wolverines had finished their season by then. Meyer, who had coached the Gators to a 12-1 record and their seventh SEC title since 1991, expressed hope that his team would get a fair chance.

“I have great confidence the University of Florida is going to get the chance to play for a national title,” Meyer said.

By the narrowest of margins, the Gators edged Michigan in the final BCS poll after beating Arkansas. Florida’s BCS average was .944, the Wolverines .934. It took the humans to break a tie by the computers. A 26-point margin in the Harris Poll and a 38-point edge in the USA Today/ESPN Coaches Poll was the difference.

Meyer didn’t get a vote in the ESPN/USA Today Coaches Poll because he elected not to accept one. He did so because the SEC was being kissed off and the Gators were being excluded as a potential opponent for Ohio State by some of the network “experts.” Michigan’s Lloyd Carr belittled Meyer’s pleas, calling it “campaigning.”

Of course, commentator Kirk Herbstreit of ESPN and ABC, a native Ohioan, would pick Ohio State to beat Florida. Respect would have to be earned in Glendale, Arizona.

Herbstreit wasn’t the only one to pick Ohio State over Florida. In my newspaper column I had done the same thing, except that I later recanted and repented.

The reality struck me on game day at 4:15am Monday, January 8: Florida not only could win against Ohio State, but would. This came after previously picking Ohio State four times over the last 30 days. I made three picks in print, four on different radio stations — all Ohio State. My last score I gave was Sunday, 31-28, Ohio State. I had a gut feeling Chris Leak would get a chance for total redemption. When I made my final radio prediction on KKFN Denver, The Irv & Joe Show, I reversed the outcome of what they expected, with Florida winning 39-31. I based that on my sudden realization that the Gators’ offense was at least as good as Michigan’s, which had put 39 points on the Buckeyes. I didn’t dream that, because it virtually came true.

“Restoring Glory To The Swamp” is excerpted from The Boys From Old Florida: Inside Gator Nation, the revised Championship Edition which was published by Sports Publishing LLC and was released in late summer of 2007.

To order the revised The Boys From Old Florida, visit www.buddymartin.org or send a check for $20 (softcover). That includes shipping and handling. Shipment this summer. Make check payable to Buddy Martin and mail to: