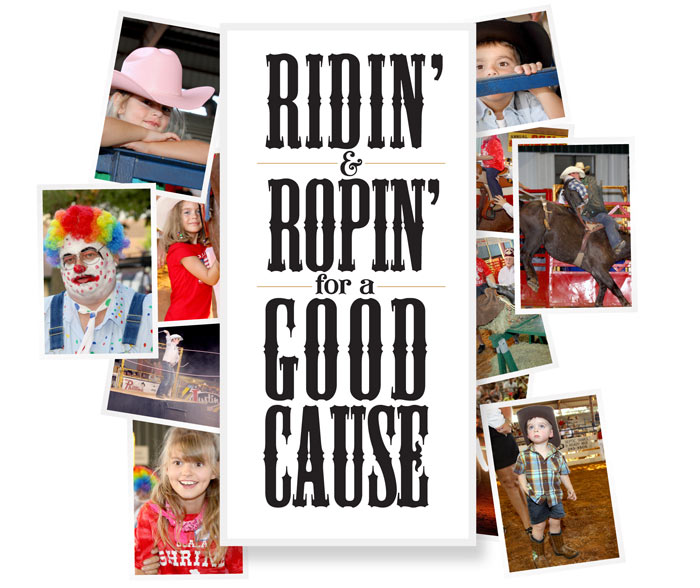 At first glance, it seems an unusual partnership. Yet every Labor Day weekend, hard-riding, competitive cowboys and a group of brave children battling an array of physical challenges come together in a memorable gathering filled with laughter, enthusiasm and more than a little pride.

This year marks the 30th annual Ocala Shrine Rodeo, a unique hometown event that has raised nearly $1.5 million for Shriners Hospitals for Children.

“The Shriners who plan and work so hard to make the rodeo a success and the community members who come and enjoy it are supporting the children from their area who receive care at Shriners Hospitals for Children-Tampa,” she adds. “The Shriners do a fantastic job of raising awareness for our hospitals. What they’ve done as far as helping our mission financially is incredible.”

Approximately 50,000 children have been treated at the Tampa hospital since it opened in 1995. Demas notes that for the past five years, over 1,100 children from Marion, Lake and Sumter counties have received medical care from Shriners Hospitals. This same group of children had 3,256 hospital visits. 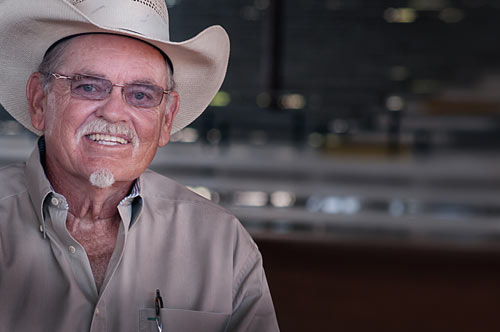 “It’s because of the people of Ocala that we’ve been successful,” says Barry Decker, first vice president of Ocala Shrine Club, which began in 1947.

Shriners have a long history in the United States, as the first Shrine Temple was formally organized in New York in 1872. The organization began its philanthropic outreach through Shriners Hospitals for Children with the opening of the first facility in Shreveport, Louisiana, in 1922.

The first hospitals were established for treating children who contracted polio, but the Shriners’ mission has expanded far beyond that original goal. Today, there are 22 hospitals throughout the United States, Canada and Mexico providing advanced care for children with orthopaedic conditions, burns, spinal cord injuries and cleft lip and palate.

The hospitals rely heavily upon the generous donations of the general public and fundraising by Shriners. One million children have benefited from treatment at Shriners Hospitals for Children.

Decker points out that whatever age patients are when treatment starts, all services are provided regardless of the patients’ ability to pay.

“They’ve helped thousands of children from this area,” he adds.

Leave it to a cowboy to come up with the idea of using a rodeo to help children.

“When I became a Shriner in 1980, the Shrine Club didn’t have any events as fundraisers,” recalls Ruben Lamb. Long known in Ocala as “Mr. Rodeo,” Lamb puts on the Southeastern Pro Rodeo every spring in addition to the Ocala Shrine Rodeo each Labor Day weekend.

“With my background as a ranch cowboy, I got involved in helping the high school rodeo get started, which is held in conjunction with the Southeastern Youth Fair,” says Lamb. “Paul Kimbrough, who was in charge of the high school rodeo and is a good friend of mine, suggested doing a pro rodeo as a fundraiser. The Shrine Club turned it down at first, but I kept talking about it, and in 1983, Jim Lowry, who was then the president, said, ‘go ahead.’ We did our first Shrine Rodeo in 1983, and after the dust settled, we made believers out of the non-believers. We turned in $30,000 to the Shriners Hospitals from that first rodeo.”

The unexpected success of that initial event made it easier to get sponsors for the rodeo in the following years. Sponsorships start at $300; the Shrine Club uses the money donated for sponsorships to pay for the costs of putting on the rodeo. All monies generated by ticket sales, food and beverage concessions go directly to Shriners Hospitals.

Contestants from all across the southeastern U.S. arrive in Ocala to compete for approximately$35,000 in prize money in the Ocala Shrine Rodeo. The Professional Rodeo Cowboys Association (PRCA) divides the country into circuits, and the Southeast, with nine states, makes up one of the largest circuits.

“This is one of the only professional sports in which a participant pays to participate,” says Lamb. “I call it ‘pay to play,’ but it’s not play to them. They’re serious about it because they’re competing for prize money and points, which qualify them for the Southeast Circuit Finals in November. Some of these cowboys will also qualify for the National Finals Rodeo, which is held in Las Vegas in December.”

“The two most popular events in rodeo are bull riding, followed by barrel racing,” notes Lamb. “Bull riding is the most dangerous eight seconds in any sporting event, while women’s barrel racing is the event that draws the most participants. It pays out more money because of more entry fees.”

Lamb says that barrel racing is one of the easiest events for spectators to understand, even if they’ve never been to a rodeo before. Each horse-and-rider team races against the clock, running a cloverleaf pattern around three barrels while trying to cut the turns as sharp as possible without knocking over a barrel, as that means a five-second penalty.

Although the rough stock events (bull and bronc riding) are typically the domain of cowboys attempting to score with an eight-second ride, Lamb says this isn’t always the case.

“We don’t discriminate. If there’s a cowgirl who wants to compete in any of the events (other than barrel racing), she can. Back in the spring, we had a girl enter the saddle bronc riding and bull riding events in the Southeastern Pro Rodeo.”

Gates open at 5:30pm, and on Saturday, you’ll be able to watch the Special Rodeo featuring children who are Shriners Hospital patients, along with their siblings. Cowboys and cowgirls taking part in the actual rodeo partner with the kids as they participate in events like stick horse races, simulated bull rides and “dummy” steer roping.

Last year, about 25 children took part (for various physical reasons, not all patients are able to participate), and each one walked away with a cowboy hat, trophy and a real contestant number like the actual rodeo cowboys wear.

“We usually have more cowboys than kids, because the cowboys want to be part of it and support the program,” says Lamb. “The last several years, we’ve started giving the kids a ride on a real horse; that’s probably the most popular thing.”

“It’s very touching and a whole lot of fun,” Decker adds. “It’s a way of giving back to the kids and having them come out and have a good time. We also do a Christmas party for them at the end of the year, which is when we choose a buckaroo and a princess for the rodeo.”

Eagerly awaiting the rodeo is Tyler Snow, 7, this year’s buckaroo. Tyler, who attends Greenway Elementary, has osteogenesis imperfecta, a genetic bone disorder also known as “brittle bone disease.” His parents, John and Tiffany Fullbright of Ocala, have been working closely with Shriners Hospitals since Tyler had his first bone fracture at age 4.

“With his condition, it’s really expensive with the patching, X-rays and hospital visits,” says Tiffany. “Thankfully, with Shriners, you don’t have to worry about paying for all that out of pocket. The doctor specializes in this disorder, so it’s nice to have confidence in the doctor.

“It’s hard to put into words what the Shriners have done for our family,” she adds. “It’s been amazing. They do so much for the families who need support. They are a wonderful organization, and we’re blessed to have them in our lives to help with our son’s genetic disorder.” 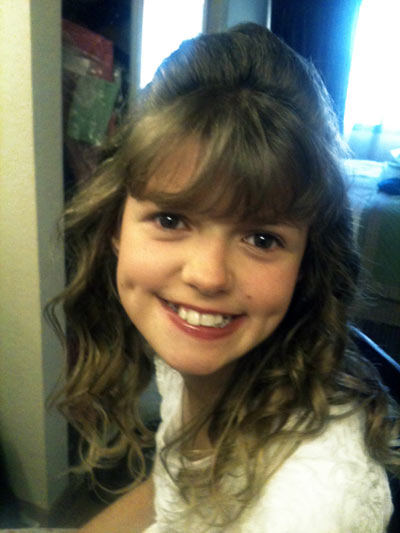 This year’s rodeo princess is 11-year-old “JuJu”Julieanna Gray Dennis of Ocala, who has been treated since age 2 at Shriners Hospitals because of her cerebral palsy. Despite her physical limitations, JuJu gets around well by using hand crutches.

Having taken part in the special rodeo last year where she was thrilled to ride a real horse, JuJu is looking forward to this year’s event.

“She was telling everyone, ‘I’m the rodeo princess!’ She’s so happy,” says Tommy Dennis, JuJu’s father. “One of her favorite things is watching bull riding; she watches PBR events on television and counts to eight when they’re riding.”

All of JuJu’s treatments have taken place at the Tampa hospital. In addition to being a patient, JuJu is an ambassador for Shriners Hospitals for Children, which means she may appear at events or have her photo used for promotional purposes. One unforgettable part of being an ambassador was that JuJu and her parents, Tommy and Stephany, along with brother and sister, Emye and Noah, were extras in the movie A Dolphin Tale.

“The Shriners have been so kind and giving and willing to help. We so appreciate the Shriners for all they do, not just for Julieanna but for all the kids,” says Dennis. “The things they do are so needed and appreciated. I don’t think they get the recognition they deserve. I really do thank God for Shriners.”

Kids 5 and under are free either day.

Friday Family Night Ticket 4-pack $30: Good for 2 adults and 2 children 11 and under. (Must be purchased in advance at an outlet, RCC Western Stores, Seminole Stores, Russell’s Western Wear.)

If you know of a child who needs pediatric orthopaedic care,