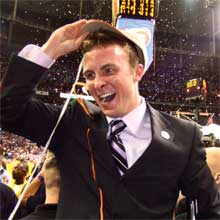 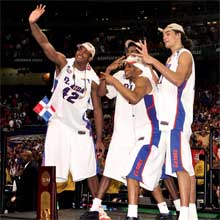 Nick Pitino calls the Kentucky program “The Roman Empire of College Basketball.” So when Donovan said no to Hoopus Maximus, turning down the Wildcats’ offer as coach, it was almost as exciting to Gator fans as winning those wire-to-wire-to-wire national championships.

Ocala’s Matt McCall, in particular, was delighted at Donovan’s decision. He serves as Donovan’s director of basketball operations for the University of Florida and has just experienced the ride of his life on the bench with the two-time national champions.

“If Coach Donovan had gone to Kentucky and asked me to go with him, I would have done it,” said McCall, son of Beth and Wayne McCall of Ocala and graduate of Belleview High School and the University of Florida. “I’m a Gator and always will be, but I love Coach Donovan. In fact, I think they should name the floor [at the O’Connell Center]
after him.”

Donovan has close ties to several Ocalans, including the McCalls, and has been a loyal supporter of the Ocala Gator Tip-off Club since coming to Florida over a decade ago.

For Augie Greiner, founder and president of the Tip-off Club, Billy staying at Florida meant he could keep in close contact with the Donovan family with whom he and his wife Sue have developed such a close friendship. Greiner is also a long-time friend of the McCalls and is very proud of Matt’s accomplishments.

“Billy thinks the world of Matt,” says Greiner. “Just the fact that he had to go to Jeremy Foley to keep him on the staff tells you what he thinks of him.”

In an interesting twist, it was Greiner who helped convince Matt’s father, Wayne McCall, to accept a football scholarship to Florida, where he became a linebacker/captain.

Matt Never Once thought his boss was swayed by the Big Bluegrass Bucks. McCall was at the side of Donovan and saw how focused the coaches and players were on repeating and how they blocked out almost everything around them.

“He never mentioned it [the Kentucky offer],” says McCall.

So focused were they, in fact, that the remarkable milestone posted by the group wasn’t even fully realized until the press conference and the celebration in Gainesville a few
days later.

“Seeing those trophies up there, that was the first time it hit all of us,” says McCall. In retrospect, the 17-day journey was one big blur: “New Orleans, then St. Louis, then Atlanta.”

After that, all kinds of scenarios played out in the mind of McCall, who had been offered a job last year by former Donovan aide Anthony Grant when he went to Virginia Commonwealth as head coach.

Just to show what an integral part of the team McCall had become, Donovan matched the job title and salary. It meant Matt got to stay put in Gainesville, close to home, and soak up yet more knowledge from a legend-in-the-making.

This Was A Meteoric Rise for a young man who had quit playing basketball for Stetson, enrolled at Florida, served as a graduate assistant, and soon worked himself in the good graces of Billy D.

All during March Madness you saw McCall on TV at courtside, sitting on the bench, getting up to high-five one of the players during a time out. Matt got more time than Jim Nantz and
Billy Packer.

He had become very close to the players, especially the group known as the “Oh-Fours” — Joakim Noah, Al Horford, Corey Brewer, and Taurean Green. But he felt like Donovan was blood kin.

Matt McCall realizes he was living a dream.

Hey, who wouldn’t love riding shotgun through sports history with the new Caesar of college hoops?

Special Memories of the ‘Oh-Fours’

Ask Matt McCall who his favorite player on the national champion Florida Gator team was and he’ll hem and haw before saying unabashedly, “I love them all!”

McCall felt closest to the so-called “Oh-Fours,” the four starters who came to Florida in 2004 and formed the nucleus of the two national championship teams: Al Horford, Joakim Noah, Corey Brewer, and Taurean Green.

Here’s McCall take on each player:

AL HORFORD: “We took a trip to Canada this preseason and were crossing from Canada, back into the U.S. and were at Customs. Al is from the Dominican Republic, so they made him get off the bus and actually go inside the customs building. All everyone else had to do was just flash their ID. I had a letter signed by President Machen, just talking about how Al is a great student at UF. I headed inside to show the customs officer this, and you would have thought I was trying to smuggle something illegally into the country.  I was told to leave the building immediately or else. I feared for my life; Al got a great laugh out of it.”

COREY BREWER: “Corey has taken a liking to the great game of golf, a game I wish I had time to play every day. Corey kept popping off about how good he is and how he could beat me. My handicap is a seven, and he hasn’t really played enough golf to establish a handicap, so I told him I would give him 18 strokes. The match was never even really close. He can hit the ball a long way, but his short game is terrible. He’ll get better once he gets to the NBA because it seems to me that’s all anyone does up there.”

TAUREAN GREEN: “For the past three years, a couple of the other guys on staff have started an intramural team on campus because we all love to play basketball so much. Taurean’s our coach. He’s always getting on me about shooting too much, probably because his first summer here we were playing pickup ball in the facility; the two of us were coming down on the fast break and I looked him off and pulled up for three. I tell him, ‘Coach Green, the basket’s always open.’”

JOAKIM NOAH: “Joakim is by far the most unique individual of the entire bunch. He has his own vocabulary — the guy just makes up words.  ‘NDONGA!’ for instance. When I was a GA [graduate assistant], I would stay after practice with him every day and shoot free throws. He couldn’t leave the gym until he made 10 in a row. After every one, he would yell ‘Scchwaaggaa!’”