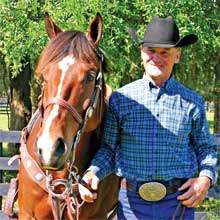 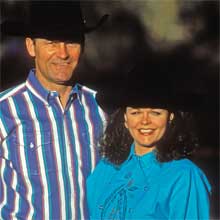 There is something to be said for knowing what you want. For some of us, this awareness comes much earlier than for others.

Even in kindergarten, Dan Dailey used to practice printing his name followed by the title, “World Champion All-Around Cowboy” in careful, five-year-old handwriting. At an age when most children are just figuring out that they can survive without mom for a few hours, Dan already had no doubts about what he wanted to be when he grew up.

That Dan Dailey went on to become the winningest cowboy in rodeo history, capturing an unprecedented 29 world championships, underscores the fact that even at five years old, he was all business.

Born in 1951 and raised in Baker City, Oregon, Dan was the son of a rancher who rodeoed for a hobby on weekends.

“By the time I was big enough to walk, Dad had me on a horse,” says Dan. “I was riding before I really even knew my name.”

Then the titles started coming.

From 1976 through 1995, the name Dan Dailey was synonymous with world champion. In addition to the 17 All-Around titles and 11 World Champion Saddle Bronc titles, he was also a World Champion Steer Wrestler. Throughout his career, Dan set numerous world records. From 1974 through 1995, he qualified for the International Finals Rodeo a phenomenal 57 times, more times and in more events than any other cowboy.

In 1994, Dan was also recognized for his “outstanding achievements in the field of rodeo” with the Academy of Victor Sports Awards. He was the first cowboy ever to be nominated and honored with this prestigious award, which recognizes the 25 top athletes in different aspects of the sporting world each year. Sportswriters from around the country nominate the athletes and Dan was honored along with greats such as hockey legend Wayne Gretzky, boxer Evander Holyfield, and football coach Jimmy Johnson.

“It was definitely one of the highlights of my career,” Dan notes.

Another sterling achievement took place that same year when his portrait by artist Duane Bryers was unveiled and added to the permanent collection in the National Cowboy Hall of Fame and Western Heritage Center in Oklahoma City.

It only makes sense that rodeo introduced Dan and his future wife, Robin. At the 1984 International Finals Rodeo in Oklahoma City, Dan was once again World Champion All-Around Cowboy and Robin Vroman was crowned Miss Rodeo USA. Each was equally impressed by the other’s accomplishments.

“We met at the rodeo, but we didn’t see each other again for six months until we met again at a rodeo in Sister, Oregon,” remembers Robin, an Oklahoma native. They married in February 1985 and recently celebrated their 20th wedding anniversary.

Although crazy about kids, the couple never had children of their own. “We were career-focused and traveling on the road was not the way we wanted to raise a family,” Robin says.

The traveling itself might have grown old to some, but Dan and Robin never tired of it.

“We’d put 120,000 miles on a truck each year and that’s not counting the times I’d hop on a plane or catch a ride with someone else,” Dan recalls. “We were fortunate because I had sponsors, but it still costs a lot to go up and down the road hauling a horse. If you’re not winning, it gets pretty expensive.”

There were even times Dan would compete in one rodeo on the east coast, then catch a plane to California to compete in another rodeo the following day.

“We’d pick out the biggest-paying rodeos and map out a plan each month,” Dan says. “In the winter, we’d go to two big rodeos a week, but in the summer, we’d hit at least five rodeos a week, sometimes as many as seven or eight. We might be in Oklahoma on a Thursday night, then hit Missouri, then Michigan, and be in New York by the end of the weekend. There were times we would compete at two different rodeos in one day.”

“We lived in our truck and trailer,” admits Robin, who twice qualified for the International Finals Rodeo in barrel racing. “But it didn’t get old. We’ve been to every major city across the country.”

Professional rodeo is not a sport for the faint of heart — or body. Many a good cowboy has been seriously injured, crippled, and even killed when competing. That Dan enjoyed such a long career with very few injuries says a great deal.

“In 1975,” he recalls, “I broke bones in my foot competing and the doctor put me in a cast. A few days later, I drew the three best rides at a rodeo in Davie, Florida. I cut my cast off, split my boot so I could lace it up to support my foot and I placed in all three events.”

“For an eight-second ride, saddle bronc riding is the easiest event on your body,” Dan observes. “Broncs are just like regular saddle horses in that some are smoother rides than others.”

Dan Dailey looks the part of all-American cowboy. This, combined with his outstanding success in the rodeo arena, made him a natural for endorsements and promotions. With his clear blue gaze, trademark black hat, and chiseled jaw, he epitomizes the treasured western icon of cowboy hero.

In addition to endorsing national products, such as Stetson hats and others, Dan has made numerous television appearances on ESPN, Prime Sports Network, TNN, and NBC’s Today. He rode in the Macy’s Thanksgiving Day Parade twice and has met countless notables and celebrities in his travels, something he considers “icing on the cake” of a long and successful career.

“Because Dan worked so many events, he could afford to rodeo for a living, which few people can afford to do,” Robin notes. “He’s also had endorsements throughout his career, which supplemented his income and provided us with opportunities to meet people that we never would have met otherwise.”

Rodeo will always stir Dan’s blood and he refuses to say that he is “officially retired.” He still makes some rodeo appearances in a celebrity role and enjoys speaking at rodeo church services, but having a farm makes it a lot tougher to hit the road.

In 1999, the opportunity to produce some Professional Bull Riders (PBR) events brought the couple to Ocala. They visited Ocala Word of Faith church and decided they belonged in the Horse Capital of the World.

The Daileys have a 70-acre farm in northwest Marion County where Dan trains and sells horses and gives private lessons to students in a number of different rodeo events.

“He has so many students that need his help,” explains Robin, who currently sells farm and ranch real estate for Coldwell Banker. “Dan will help anybody.”

With his shy smile and soft-spoken drawl, Dan Dailey is not one to jump up and broadcast his accomplishments. The winningest cowboy in rodeo history is content to let visitors discover this fact on their own.