Drivers along State Road 44 between Wildwood and Leesburg can’t miss the bronze statues at the new Meggison Road entrance to The Villages. Anyone who has read Patrick D. Smith’s classic book A Land Remembered knows that this part of Florida was home to many cattle-driving crackers, and the scene is a flashback to Florida’s cowboy days. The bronze cowboy on his horse herding his cattle is a tribute to Florida’s early settlers.

Watching the sun set behind an old water tower, following the boot prints, animal tracks and wagon wheel grooves toward a rustic log cabin and gazing up at an old-fashioned windmill… well, this place certainly feels as if it could be a resting place for those 19th century cowboys after a long day on horseback. Then, the music begins, and you realize this isn’t the same prairie Smith wrote about. Hundreds of jolly retirees are dancing the night away on Paddock Square in Brownwood, the newest town in The Villages. 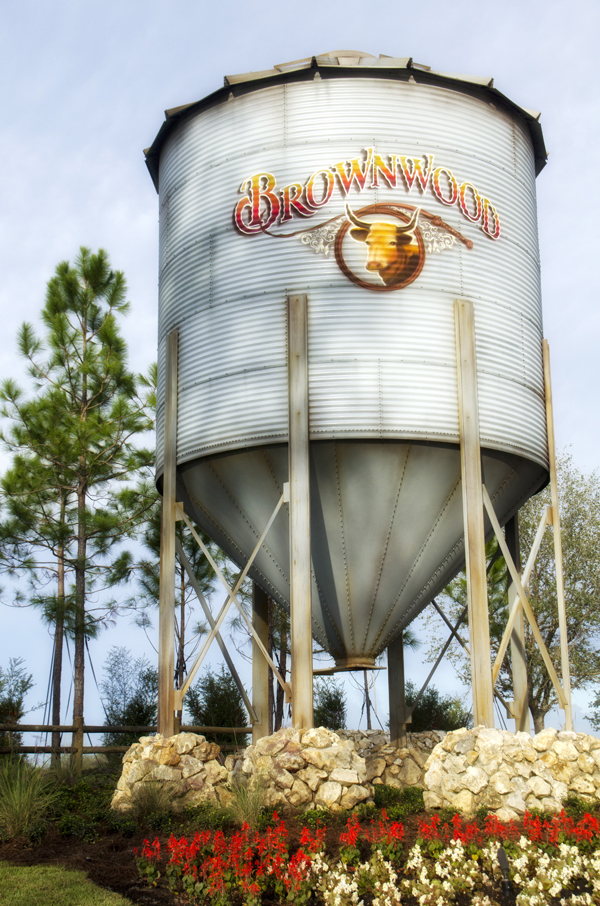 After living in Florida’s friendliest hometown for more than a decade, I am sort of used to the theme park magic that comes with new buildings and special events. When I first read about a third town square, I was a little jaded. After all, we didn’t need any more fake historical markers. My cynicism changed with my first visit to Brownwood on an early October morning. The new town square tastefully honors those early Florida settlers whose cattle trails crisscrossed this territory. It’s also reminiscent of Brownwood Acres in Michigan, where developer Gary Morse’s children spent their teenage years and have wonderful memories working at their grandparent’s shop and restaurant.

As I headed into Paddock Square, I saw a man from Wildwood who was grinning from ear to ear as he shouted to me, “This is even better than Disney World, and it doesn’t cost anything.”

Brownwood takes away some of the apprehension that nonresidents often feel about shopping or visiting restaurants in The Villages. It’s easily accessible from both Interstate 75 and the Florida Turnpike. Parking is plentiful, restaurants are springing up quickly, the movie theater is massive and the Saturday morning farmers market welcomes everyone who wants to try farm-fresh produce and delicious homemade goods.

As Ocala Style went to press, many of the shops and eateries were not yet open. Even without them, it was quite easy to spend a full Saturday enjoying Brownwood from morning until evening. Here is how to go about it:

Breakfast at the Farmers Market

Park near the enormous Barnstorm Theater and walk over to the south entrance of Paddock Square. The smell of freshly baked bread and pastries will lead you in the right direction toward a pink tent that houses “A Wish or Two Ago International Bakery and Marketplace.” Philip and Kathleen Farrugia, who own the Grand Island store and bakery, have the best French baguettes, bread, pastries and biscotti this side of the Atlantic. That’s because Philip is a native of France, and he brought his baking skills with him when he came to America years ago.

“What Philip makes is a lost art,” says Kathleen, who named the business after a poem written by her grandmother. “It’s not often you find a master French baker who has such a passion for his bread. Each loaf is like his baby.”

With your pastry in hand, look to the left for a cup of organic brew from Bean Together Coffee. Enter into Paddock Square through the wrought iron arches, and sit on the covered bleacher seats for a little people watching while you enjoy your breakfast.

If your hands are sticky after all those pastries (you’ll buy more than one, I promise), look for the modern-day outhouse building next to the theater. Now, you are ready to start the circle around Paddock Square where vendors are waiting to share the freshest produce and goods from Central Florida. Make it easy on yourself and bring a recyclable shopping bag for the day.

Shop ’til You Drop

You only thought you needed brick-and-mortar stores. The Saturday Morning Farmers Market offers everything you need for a healthy meal—or several. The market has grown larger every week since Brownwood opened in late October with 48 vendors. Less than a month later, nearly 70 vendors had circled the perimeter of Paddock Square. The best part of the market is the vendors’ passion for their products. Every time I’ve visited the market, I’ve learned something new just by talking to the vendors who often make their products from scratch.

Here are a few of my favorites:

Ocala-based Buffalo Girl Goat’s Milk Soaps has become one my favorite vendors. Owner Luzette Kincaid’s 12-year-old business was called “Buffalo Girl” long before Brownwood opened. In fact, she was sort of “recruited” for the market because her products definitely fit the Brownwood concept. Her all-natural soaps make great gifts.

“This is what you get when you cross goats with a chemistry degree,” says the very personable Kincaid.

I am a firm believer in buying pure honey from local apiaries, but sometimes it’s hard to get to one during the workweek. Scott and Beth Irving of Lake Panasoffkee set up their Riverview Apiaries Raw and Local Honey display and captured my attention and taste buds with their Palmetto honey.

Florida olive oil? It’s definitely happening as more and more citrus groves become olive groves, according to Maria Tracy of Heather Oaks Iris Farm in Lady Lake. Maria has a table full of her own olive oils she makes with imported olives. In a few years, however, she’ll be pressing her own olives from trees planted on her Lady Lake farm. Be sure to taste her Arbequina Olive Oil with its hint of lemon.

Strega Nonna’s Market should be your next stop for naturally grown organic garlic. Mike Cosmo can answer every question you’ve ever had about garlic. He told me more about the different varieties of garlic than I even knew existed. He also gives lessons about storing and roasting garlic, and I also learned that garlic juice reduces itching from bug bites and rashes. His wife, Sherry, mans the other side of the table to dole out samples of her organic granola. 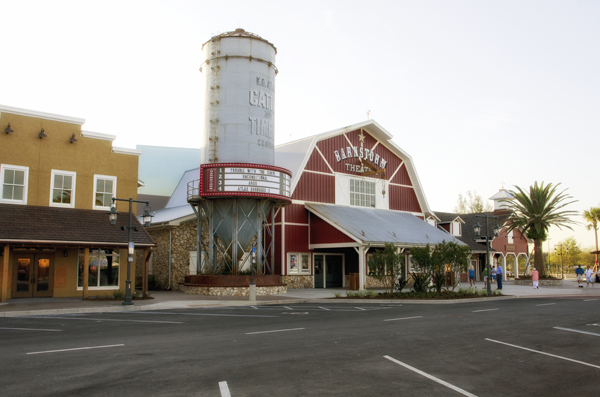 Relaxing at the Barnstorm Theater

After all the noshing on free samples at the Saturday farmers market, which runs from 9am until 1pm, you’ll want to walk through Brownwood’s streets and check out some of the shops and eateries that have recently opened. If you think no one will believe your description of this Florida frontier town, you can buy a few postcards at Banner Mercantile along with a variety of other merchandise.

Now it’s time to relax for a while at Brownwood’s crown jewel, the Barnstorm Theater. You can’t miss the silo marquee and red barn structure, which houses one of the largest, most state-of-the-art movie theaters in Florida. The nearly 2,000-seat Barnstorm Theater has 10-foot, concrete walls separating eight screens showing first-run movies.

Sit a spell in one of the rockers while you look at all the antique items decorating the theater’s lobby, including a vintage John Deere tractor. Although you could spend quite a while perusing the interesting décor, you are most likely ready to sit and relax. The stadium-style screening rooms have plush, comfortable seats where you can kick back and enjoy the show.

After all that walking and a movie, you’ve probably worked up quite an appetite. City Fire, a neighborhood-style bar and grill, has a great outdoor dining area overlooking Paddock Square where you can watch the musicians set up for the evening’s entertainment. 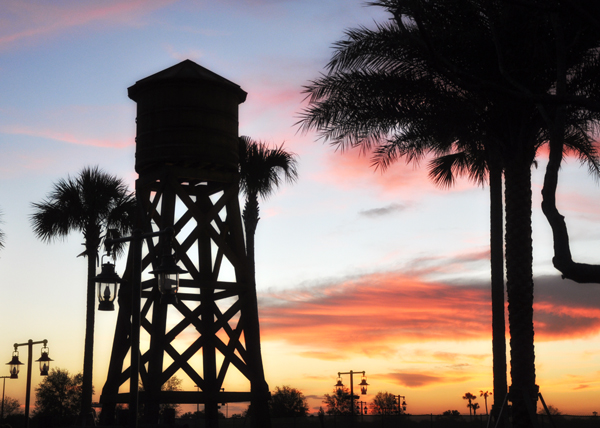 Sunset on the Square

The day is not over until the sun drops behind the water tower and cloaks Brownwood’s Paddock Square in an orange and red glow. It’s easy to picture how the early Florida settlers would have entertained themselves on the log cabin porch because that is where today’s entertainers perform nightly from 5 to 9pm. Dancers of all ages and all skill levels come out to enjoy the music and Florida’s mild evenings. Friends make new friends easily, and people love to talk about how they discovered The Villages, so don’t be shy about talking to strangers.

It’s been a full Saturday, and now it’s time to rustle up all your purchases and kin and head on home. As you leave, you can almost hear the campfires crackling and soft lowing of the cattle in the distance.

The Building of Brownwood video series is online at thevillages.com/newsletter/201211/happenings.