A horse’s luck went from bad to good when a village of caring people came together to give her a second chance at a healthy, happy life.

No one knows how Izzi ended up abandoned or how long she wandered around a rural Tampa area neighborhood. But by the time the Hillsborough County Sheriff’s Office (HCSO) took custody of her, the gray filly was literally a bag of bones, clinging to life. 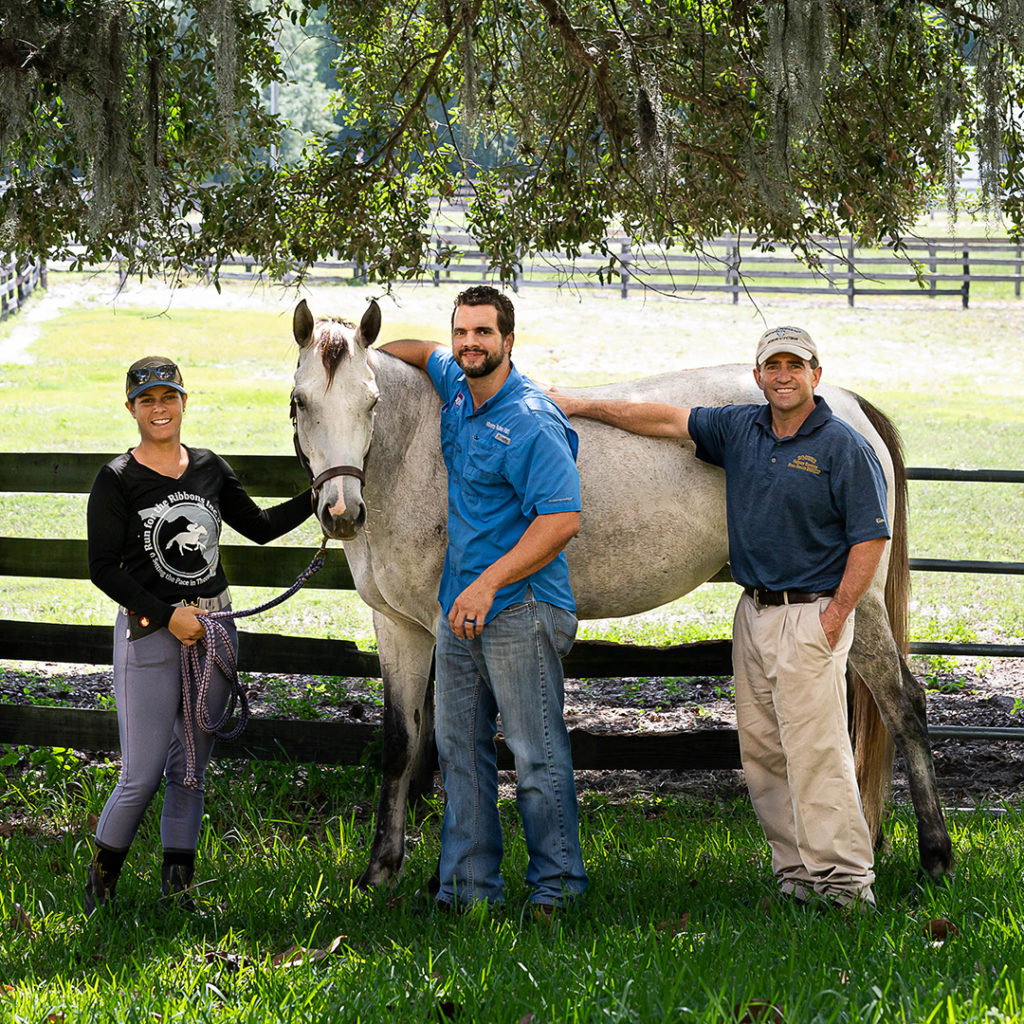 “The HCSO provided Izzi with basic veterinarian care while they looked for an equine rescue group. A contact led them to Run for the Ribbons in late September 2019,” explains Laurine Fuller-Vargas, founder and president of the Morriston-based 501(c)(3) organization that focuses on rescuing, rehabbing, retraining and rehoming horses. “When we saw the heartbreaking pictures of Izzi, we knew we had to do something. We only take in five rescue horses a year, on a case-by-case basis. Some horses need more care and rehab than others. Izzi was an extreme case.”

The HCSO delivered Izzi on October 2nd, 2019, to Fuller-Vargas’s Cedar Lock Farm, where Run for the Ribbons Inc. is based.

“Izzi couldn’t walk; she had to be carried by eight people off the trailer. That’s when we realized her condition was even worse than we thought,” recalls Fuller-Vargas. “When we actually saw her in person, I wondered if we could actually save her.”

Fuller-Vargas called in four equine veterinarians she had worked with on other rescues over the years to give their honest evaluation of Izzi’s condition. She wanted their professional advice to find out if there was a viable, humane way forward for Izzi. 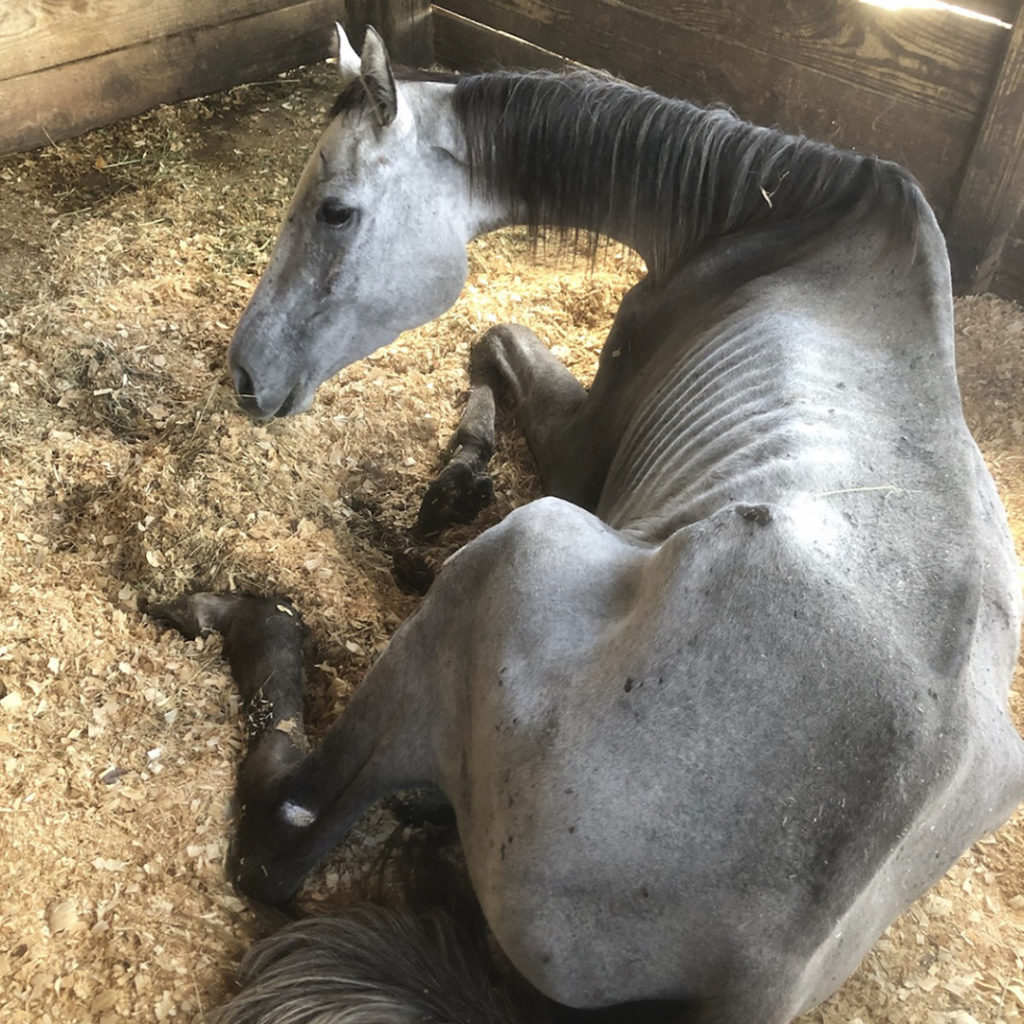 “The consensus was that she was a high-risk, intensive-care rescue case. But all the vets were impressed with her sweet, easygoing demeanor despite all she had been through and they suspected she would be a good patient,” recounts Fuller-Vargas. “Dr. Alberto Rullan, who operates Equine Performance Innovative Center (EPIC), told us he would provide Izzi’s initial treatment. We were delighted since Dr. Rullan is an excellent vet with a soft spot for rescue cases. And his clinic is only four miles from our farm. So, with great care and patience, we carried Izzi into the trailer and took her to EPIC on October 3rd.”

While he had agreed to take on Izzi’s case, Dr. Rullan also knew there was a good chance there might not be a happy ending.

“Izzi was emaciated, severely dehydrated, had extreme muscle wasting, as well as systemic inflammation. Her front feet were so severely infected that she couldn’t even stand, never mind walk,” describes Rullan. “But Izzi didn’t seem ready to quit, so we decided not to give up on her. As soon as she was at EPIC, we began a very specific protocol that I had used on other serious cases to give Izzi every chance.”

Immediately, Izzi went into ICU treatment. She was given intravenous antibiotics, nutrition and fluids. Then she began a course of hyperbaric oxygen chamber treatments; at first once a day, then later twice a day, an hour at a time. Rullan points out that this is a frontline treatment because “it increases the oxygen levels in the blood to rejuvenate the system and speeds healing throughout the body.” By the 10th treatment, Rullan began to see an improvement in Izzi and she was able to walk a short distance. In her three months at EPIC, Izzi made more than 40 trips to the hyperbaric oxygen chamber.

“At the same time, Izzi was getting cold saltwater leg spa treatments to reduce inflammation in her lower legs and accelerate tissue healing,” Rullan offers. “She also spent time on a vibration plate to increase her bone density, circulation and muscle mass. We also gave her ozone therapy to attack bacterial infections and boost her immune system.”

Slowly, very slowly, Izzi began to regain her health, but it wasn’t without setbacks. 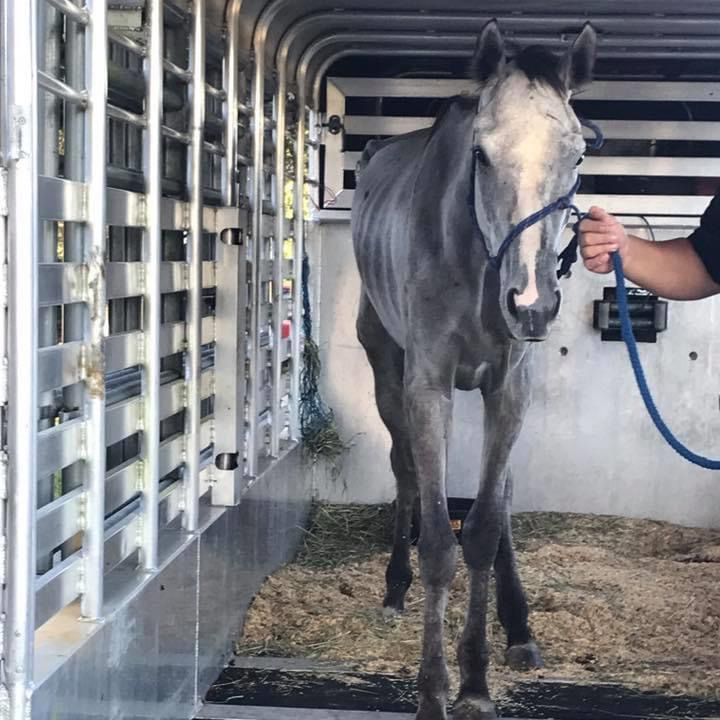 “We didn’t take it one day at a time; we took it half-a-day at a time with Izzi,” Rullan recalls. “Every day we had to make a decision to move forward or not. We didn’t want to cause her any more suffering. We let Izzi tell us every day, hour to hour, if she wanted to go on.”

According to Rullan, Izzi made a major step forward thanks to Dr. Brent Barrett, an Ocala-based veterinarian who focuses on equine podiatry and regularly works on the feet of horses being treated at EPIC.

“I was aware of Izzi, but hadn’t gotten involved in her care,” Barrett explains. “Then one day I happened to be there when she was brought out of her stall. In that moment, I just knew I had to do what I could to help her.”

Radiographs showed a keratoma in Izzi’s left front foot. A keratoma is a benign tumor in the inner hoof wall, which, as it expands, causes extreme pain and lameness. Barrett first applied horseshoes designed to help stabilize her foot; nine days later, on November 29th, came surgery to remove the keratoma.

“After the surgery, Izzi began to steadily improve,” says Barrett. “I was very happy to see that because we all felt that Izzi being more mobile was key to her recovery.”

Rullan concurs, adding, “Now that Izzi could be on her feet more, we could ramp up her physical therapy to increase her range of motion, strength and muscle mass.” 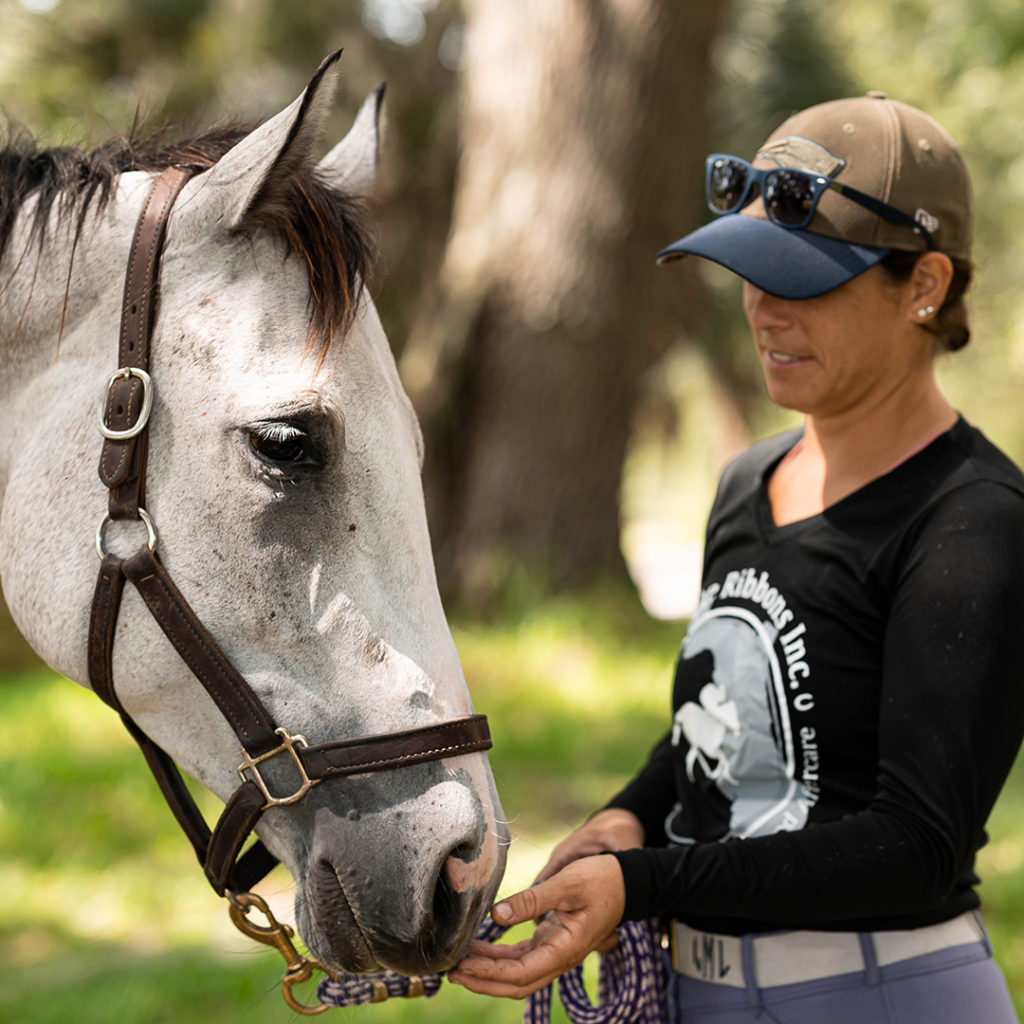 As Izzi continued to improve, the discussion began about when she could leave EPIC and continue her recovery at Run for the Ribbons. Rullan admits, “It was nerve wracking because here at the clinic we had all these advanced treatments. But she couldn’t stay forever and she wouldn’t have them at the farm.”

Slowly, Izzi was weaned from her treatment regimen one modality at a time. Over the next month, some days it was the proverbial one step forward and two steps back. But Rullan, his team and Izzi persisted.

On December 31st, Izzi walked for the first time on her own power onto a horse trailer and took the short ride to her new home. For Fuller-Vargas, it was a day she had been hoping and waiting for over the past three months.

“I thought it was very appropriate that Izzi came home on New Year’s Eve, ready to start her new life,” Fuller-Vargas enthuses. “Izzi never would’ve made it without the compassionate care of Dr. Rullan and Dr. Barrett. They both donated so much of their services and time. Dr. Barrett continues to do his special shoeing on Izzi every five to six weeks. He recently had to take care of an abscess in her right foot, but it wasn’t a major setback. And Dr. Rullan visits her whenever he can.” 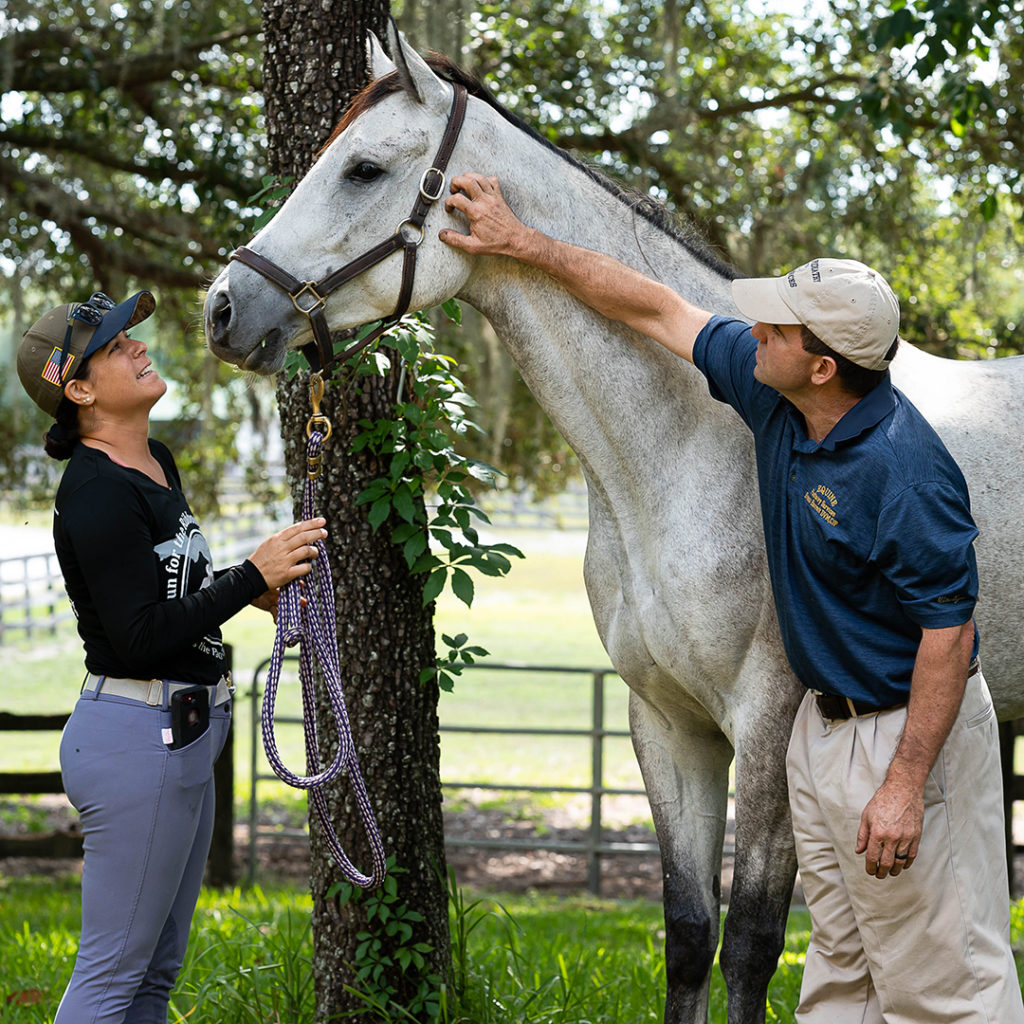 Fuller-Vargas acknowledges that Izzi’s intensive care was expensive and that there are, even with the generosity of Rullan and Barrett, bills to be paid.

“They are graciously allowing us to pay them as we raise funds,” she shares.

Now, almost a year after her rescue, Izzi is a healthy, happy horse. She spends her days grazing in a shady paddock with Princess Rose, a retired racehorse. When offered apple slices from a visitor, Izzi first sniffs each slice before gently taking some, chewing slowly, savoring the sweet treat.

“Izzi and Princess have become great buddies,” explains Fuller-Vargas. “Izzi is still a sweetie, but she’s definitely the boss of the two. She outruns Princess to the feed tub and makes sure she gets her share of carrots. One day she may be adopted out, but she’s become our mascot. Izzi is our little miracle horse.” 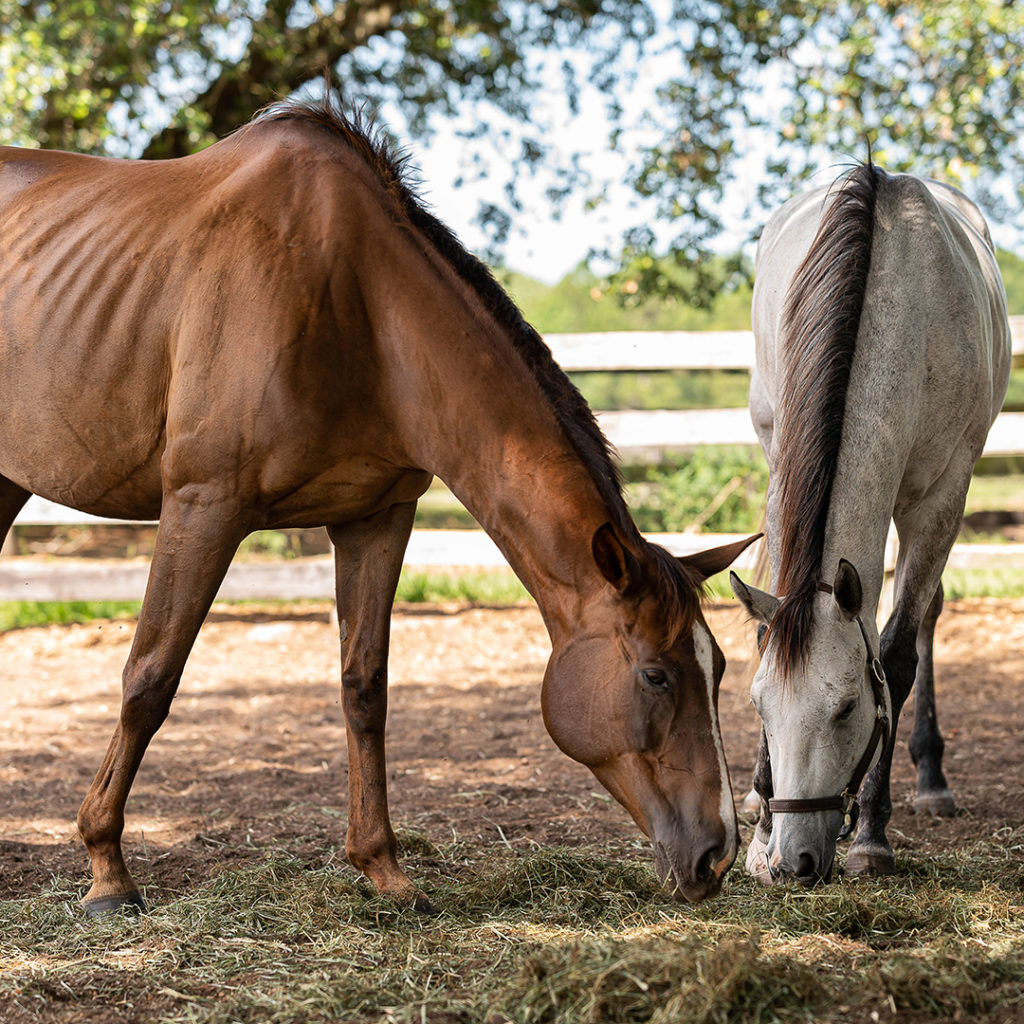 Want to get involved? Contact Laurine Fuller-Vargas at runfortheribbons@gmail.com or (774) 328-1760. For more information, visit www.runfortheribbons.org