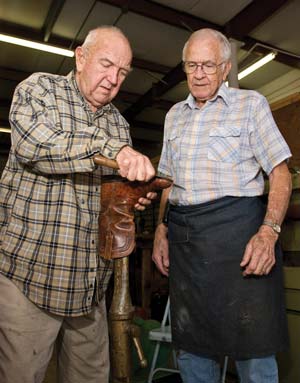 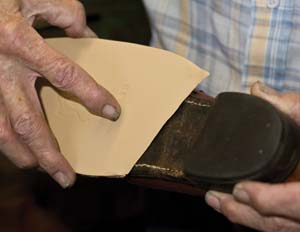 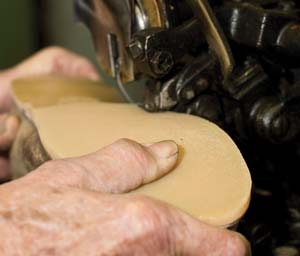 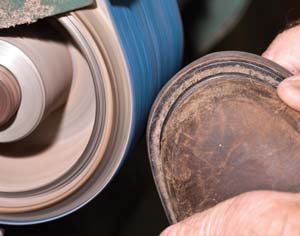 Bill Rodgers and Cecil Cuynn are on a mission to save soles, one shoe and one boot at a time. Despite their years, they soldier on in an age when it’s more expedient to replace than repair.

The two partnered in 2004. Cecil had no experience in shoe repair, while Bill had, at one time, owned 10 shoe repair shops scattered across Marion, Levy, Alachua, and Citrus counties.

“It was a lot of work,” Bill recalls of his earlier years. “There wasn’t a lot of money in it.”

By 1992 Bill had sold the last of his shops and returned to his first vocation—training Thoroughbred horses.

Then five years ago, following the death of his mother, he decided to get back into the shoe repair business, opening Horse Country Shoe Repair inside Farriers Depot across from the Ocala International Airport. Two years later he moved the shop up the street to an industrial building on SW 1st Lane. But even before he decided to relocate, Bill realized he needed help. He was being overwhelmed by work. But where could he turn? There wasn’t a pool of experienced shoemakers to draw on. Worse still, no one seemed interested in learning a trade with no real future. Fortunately, for Bill, there was someone, but not someone he expected.

Cecil Cuynn, at 81, was by his own ad-mission bored with retirement. No, make that miserable. He had worked at his son-in-law’s Ocala cabinet shop after re-tiring from the Pinellas County school system and had a strong back-ground in maintenance, but was now at loose ends.

THE TWO MEN MET and took an im-mediate liking to each other.

“He’s a mechanic,” says Bill. “He can fix everything we have.”

That was a talent Bill was sorely in need of since much of his shoe repair machinery is ancient; his Singer Patching Machine dates back to 1929. Still, Cecil faced a rather daunting learning curve.

“It was probably the first shoe shop I’d ever been in,” he says, “short of the counter.”

But he proved a quick learner and Bill was more than willing to mentor him.

Bill grew up on a farm outside Redding, Mass. At age 10 he started buying and training horses. That led to fixing bridles, saddles, and harnesses.

“When I was in high school I hung around the shoe shop downtown,” he says, “did some shines and whatever else they wanted me to do.”

But it was Bill’s talent as a Thorough-bred horse trainer, not a shoe repairman, that occupied the next 40 years of his life. And it was a move to Chiefland where his parents owned a farm that eventually led to the shoe repair business. At one time he owned three shops in Ocala.

TODAY, THERE ARE LESS than a handful of shoe repair shops in Marion County. It’s a sad testament to a once lucrative trade, but in Bill’s case also proves the resilience and survival of a niche business in the middle of horse country.

“There used to be 50,000 shoemakers in the United States,” Bill says. “Now there are 4,000. If you tell someone you have a nice, little shoe repair business down in Ocala, they think you’re crazy.”

He admits the shoe repair business is no road to riches. The two men derive just enough to supplement their Social Security and retirement incomes.

Their most requested job is the installation of zippers on English riding boots.

“We’re the only ones doing it,” says Bill. “People come from Leesburg, Gainesville, Perry, and Lake City.”

Though the bulk of Bill and Cecil’s business centers on boots, including those worn by motorcycle law enforcement officers, they repair all types of shoes, handbags, chaps, English and Western saddles, and tack. They even handle orthopedic shoes.

“We do quite a few,” says Cecil, holding up a specially designed western boot they crafted for a female customer with a missing foot.

It’s general knowledge that business partnerships have a poor survival rate, but Bill and Cecil consider themselves lucky to have found each other. The relationship between the two men has seemingly given them what we all seek—a continued sense of purpose and recognition of worth.

Asked if they ever have had any verbal disagreements in the years they’ve been together, their answer is in near unison.

“We’ve never had a cross word with each other.” To which Bill adds, “And I don’t foresee one.”