Sculptor Francis Barnum admires teachers. After all, he might never have become a sculptor if it had not been for one teacher in particular.

“In the sixth or seventh grade, the teacher said, ‘Bring a bar of Ivory soap and a paring knife; we’re going to carve,’ and I carved a mountain lion,” Barnum recalls. “I always admire teachers because children should be exposed to lots of different things, so they get some idea of what they might want to do. I stumbled into it. If I hadn’t had that class, who knows?” 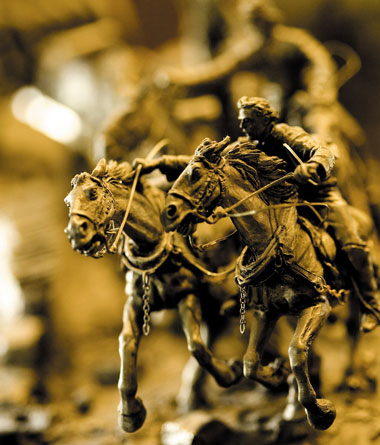 Francis also credits his success to time spent growing up in the Cuyahoga River Valley of northern Ohio.

“I hunted and fished,” he says. “I knew the outdoors, so it all came together in this Civil War work I do.”

Since then, the 79-year-old Wildwood resident has designed toys, such as the original Star Wars figures and Mr. Potato Head, on up to becoming a famous Civil War sculptor with an international following.

“I used to bring a report card home. My dad looked at it and said, ‘Art! Your only A is art?’” he says with a laugh. “I was fortunate to make a living at it. It’s just like anything else: You get out of it what you put into it. Time has flown by so fast.” 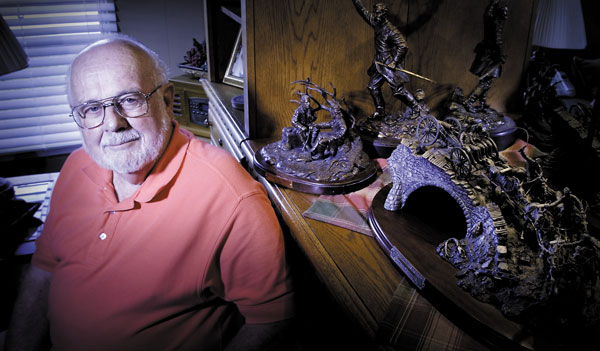 Francis describes himself as a student of history. His most ambitious piece, Burnsideís Bridge, is a tribute to the battle at Antietam.

Francis embarked on his career after he came out of the Army in 1952. At the time, he was working at a bakery in Cleveland, Ohio, when he came across an ad in a newspaper for a sculptor in Akron. He applied, performed a task, and was put in charge of the sculpture department of Kenner Toy.

In the 1960s, he went into business for himself.

“It’s not like work,” he says. “You can put me in a closet with a light bulb, and I’d be happy as long as I was working
on something.” 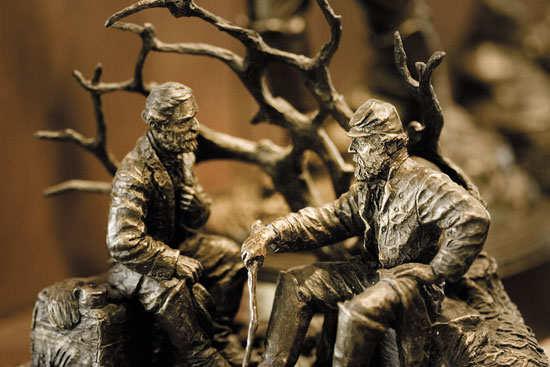 “I’m not any better a sculptor than when I started,
but I’m a lot faster.” — Francis Barnum

A client introduced him to a friend in New England and not long afterward, Francis began working with pewter and began to make Civil War sculptures in both pewter and bronze.

New England Pewter marketed his limited-edition work all over the world for years. Now he’s marketed under Churchville Galleries in Churchville, Penn.

“I also do wildlife and portrait sculptures—just about anything—because when you’re a commercial sculptor you’re doing a piano one day and Mickey Mouse the next,” he says. “You have to do everything.”

Francis works on his artwork in a studio outside the home he shares with Mary, his wife of five years. Mutual friends introduced them, and it’s easy to see why. Francis is playful and charming with Mary, and Mary talks up his work when his humility keeps him silent. For example, when asked whether he won any awards:

Francis: I’ve won best in shows, and things for various sculptures, but that’s nothing. [Laughs] That doesn’t matter to me. I’m just happy doing it.

Mary: He does two shows a year in Gettysburg. Did he say that? See, he doesn’t tell all that stuff, and then his collectors…

So Barnum has won awards, but he says that on the whole, he never was one to chase the limelight. Working within his deadlines and keeping his clients happy appeal to him more. That kind of commitment obviously resonates with his collectors, some of whom have had their faces used on Civil War sculptures.

“It’s been 30-40 years, and a lot of them have become friends, and I enjoy them,” he says. “I appreciate them buying the work. But I don’t create a piece thinking, ‘I’m going to sell these or all my others.’ I create it because I want to create something.”

Mary adds, “And he doesn’t create a piece unless it’s authentic because your collectors know if something isn’t authentic.”

Francis calls himself a student of history. He often reads about the Civil War and picks out interesting historical situations. His limited edition works can take anywhere from three weeks to several months to create. He calls Burnside’s Bridge his most ambitious piece. According to the brochure which goes along with the pewter limited edition work, Burnside’s Bridge is a tribute to the bloody battle at Antietam, where “one of two guns of Battery A, 5th U.S. Artillery crossed a narrow bridge over Antietam Creek during the third and final assault by General Ambrose Burnside’s troops against [General Robert E.] Lee’s advancing forces.”

“That took me months, and about 40 years of practice, because I’m so much faster,” he says. “I’m not any better a sculptor than when I started, but I’m a lot faster.”

Currently, he’s working on a scene he’s been wanting to do for a long time: Appomattox Court House, where Confederate General Lee and Union General Ulysses S. Grant signed the papers to end the Civil War. He’s been asked why he’s making it his last piece.

For his birthday, his collectors are throwing him a big bash in Gettysburg from Aug. 8-10.

In addition to signing his pieces in Gettysburg, he says October’s plans are for more of the same at Tepee Town in St. Augustine, where he goes once a year.

Francis is also making plans to do more painting, a hobby he recently picked up.

Last summer he did a portrait of a barn in Blairsville, Ga., where he and his wife vacation in the summer. He took a picture of the barn for reference, and then did the rest of the work freehand.

“I’m going to do some more of it,” he says of painting. “It’s something different.” He began painting again after a museum curator at Fort Boonesborough in Winchester, Ky., called him for a project, a diorama with five life-sized figures of Daniel Boone and Native Americans. Francis had to paint a mural nine-feet high and 16-feet long. It was also one of his first paintings since high school, but he waves off awe.

He constructed the huge project in his studio before hauling it to Kentucky in a U-Haul.

For the actual sculptures, he used friends and family as models. Mary’s grandson was a model for one of the Native Americans. Mary’s feet were used, and so were her granddaughter’s hands.

Mary says it was a funny experience.

“These people had molds on their heads, hands, and faces. We put a straw in their mouths so they could breath,” she explains. “My granddaughter, she couldn’t do it. She couldn’t stand that stuff on her face. She panicked.”

“We only lost two or three people,” Francis jokes.

He said the only thing difficult about any project is getting started, but once the ball is rolling, “it kind of falls into place.”

Francis Barnum’s work is in various museums, including the Cleveland Museum of Art. He also has a large collection in Gettysburg.

Does his name still sound familiar?

Along with being known for his famous Civil War sculptures, he gets asked about his last name quite often. So, yes, he admits, his great-great grandfather and P.T. Barnum’s father were brothers.