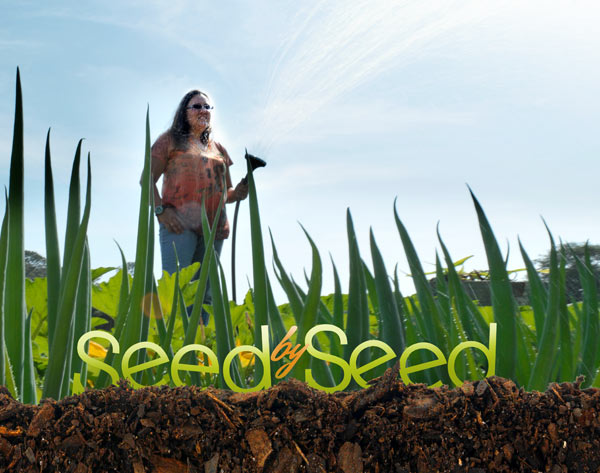 Rachelle Roper is excited about the green beans, okra, black-eyed peas, cucumbers and lettuce. And, oh, she loves seeing those big, red ripe tomatoes, just begging to be picked, sliced and tossed in a salad. This bountiful harvest from the Devereux Kids’ West Ocala community garden is just what Rachelle envisioned when she founded Feed The Need Garden.

“When I realized that there are hundreds of families who go to bed hungry in our community, I knew I had to do something,” says Rachelle. “Donations to soup kitchens and food pantries are way down, but in these tough economic times, the need is way up.”

For Rachelle, who grew up on a farm in Okahumpka, the solution to the hunger problem was simply obvious: plant a garden. Of course, given the scope of the hunger problem, Rachelle realized it would take many community gardens to begin to remedy the problem. And thus, the seed for Feed The Need Garden, a 501(c)(3) non-profit, was planted.

“The idea is to teach people to be able to feed themselves and others through gardening,” says Rachelle, 33, who not surprisingly has a bachelor’s degree from the University of Florida’s College of Agricultural and Life Sciences. “By doing this, people become self-sufficient, so they’re not just getting a handout but a hand up. And then when they can help themselves, they can return the favor and help someone else.” 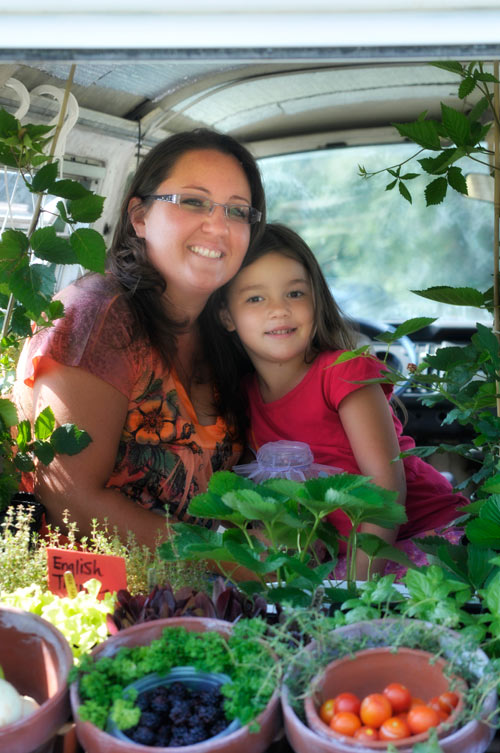 Rachelle and her 5-year-old daughter, Morgan

As Rachelle began spreading the word about Feed The Need Garden in 2010, the community quickly responded. In just a little over a year, there are now 40 gardens and counting throughout the Ocala/Marion County area. Locations where gardens have been planted include Queen of Peace Church and The Sister’s House, which donate the produce to Brothers Keepers Soup Kitchen; Hawthorne Village and Kenny’s Place Nursery donate to St. Theresa’s Soup Kitchen; G G’s House feeds the at-risk children they assist and Salam Academy helps feed the homeless.

When Scott Hackmyer, community facilitator for Devereux Kids, heard about Feed The Need Garden, he knew it was something that could benefit the West Ocala community.

“The message of being self-sufficient and using a community’s resources really resonated with me,” says Hackmyer. “This is exactly what Devereux Kids is all about, and I thought a community garden would be a great idea.”

Utilizing what had once been a little used playground behind the Devereux Kids office on Martin Luther King Boulevard, Rachelle set about planting a spring garden. First she drew up a blueprint of the 30-foot-by-40-foot garden, explained what could be planted in the spring and fall seasons, suggested a chicken-wire perimeter fence and then got to work.

“The day the garden went in looked like a scene from Little House on the Prairie,” says Hackmyer. “Rachelle did all the tilling herself with this hand-held plow, put in special growing soil and then planted all the seeds. Our job would be to water and then harvest.” 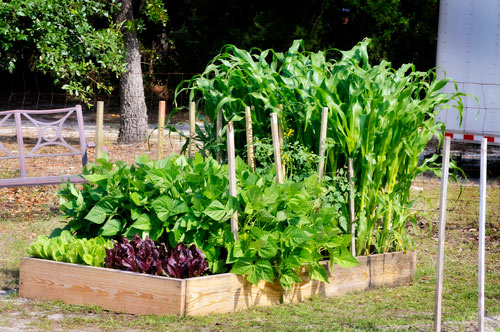 Hackmyer was pleased that there was no shortage of volunteers, all ages, for watering duty. The garden became a focal point, a meeting place in the community. Four to six weeks later, the first crop yielded plenty of lettuce, cabbage, green beans, black-eyed peas and tomatoes. The fresh veggies are free to anyone in the community. And for Hackmyer, there’s an added bonus.

“We have been able to grow enough for our community and to share with several churches who provide meals to the needy,” he says. “And now we’re meeting with church groups and encouraging them to grow gardens, too. It’s a win-win for everyone.”

The hand-held plow that Rachelle used to till the Devereux Kids garden has a special meaning for her.

“That plow belonged to my grandfather,” says Rachelle, whose résumé includes an extensive career in several agriculture-related fields. “I like to use it because it’s my connection to my family and the land that has supported us for generations. And now it’s helping support new generations by plowing up new land.”

But on occasion, Rachelle does come across land that just isn’t fertile or suitable for growing anything. Not a problem for a farm girl like Rachelle.

“One of the first people that I helped put in a garden lived out in the Ocala National Forest,” recalls Rachelle. “That was some of the worst ground I’ve ever seen. It was sandy with no nutrients, and you just couldn’t dig an inch without hitting roots.”

The solution was a 4-foot-by-8-foot raised bed garden. This particular one was constructed of client-supplied concrete blocks. Special growing soil was added, and within six weeks, there were plenty of fresh vegetables. Now Rachelle regularly makes 4-foot-by-8-foot raised bed gardens, but she uses untreated lumber, usually pine or spruce. The raised beds hold 2,000 pounds of the special soil mixture of peat, sand, chicken and mushroom compost.

“You have 32 square feet to plant,” says Rachelle. “And this simple raised bed garden can grow 32 tomatoes or 128 leaf lettuce or 288 bean plants or 512 carrots. Of course, most people like to mix it up, and you can grow in the box whatever you can grow in the ground. The possibilities are limitless.”

With each new garden, Rachelle discovered unexpected rewards and how they nourished more than just the body. As she became a regular speaker at community functions, Rachelle realized additional potential for the gardens.

“I was asked to put in a garden at New Horizon Academy, which is a school for autistic children,” says Rachelle. “It was very emotional for me to hear about and then see how these children, who have trouble engaging in the world around them, are now helping to take care of the garden.”

A comment to Rachelle about it being unfortunate that they weren’t wheelchair-accessible gardens sparked an innovative solution.

“I woke up at 4am with this blueprint in my head,” says Rachelle, “and, within hours, had built the prototype for a wheelchair-accessible garden.”

While Rachelle is seeing progress in the Feed The Need Garden mission, she is hardly complacent. She typically spends three to four hours a day working in gardens, leaving her with the occupational hazard of perpetually dirty fingernails. In addition to community organizations, she also helps individuals set up personal gardens, whether traditional, raised bed or wheelchair accessible. Others who seek Rachelle’s gardening skills include 4-H clubs, public schools and home-schooled groups. As a 501(c)(3) non-profit organization, Feed The Need Garden is funded by donations from individuals and community businesses. And for those who don’t mind digging in the dirt, Rachelle is always looking for volunteers.

Every day is a new opportunity to educate people about the benefits of gardening, including cooking and preserving what you grow. And as far as Rachelle is concerned, it’s never too early to begin the education process.

“I have gardening programs for kindergarteners to senior citizens,” says Rachelle, who is often accompanied in her classroom presentations by her 5-year-old daughter Morgan. “So many kids don’t even know where food, real food and not something in a box, comes from. I find this very sad, and I’m doing my part to change that.”

On 5 acres in Belleview, Rachelle is establishing what she hopes to develop into the Feed The Need Garden Teaching School. In addition to teaching traditional gardening, she wants to show others how to grow edible landscape like she’s planted. From her farm, she already sells blueberry and thornless blackberry bushes, grape vines, fig trees, kiwi plants, vegetable seedlings and heirloom seeds. Future projects include both hydroponics and aquaponics systems, the latter would also raise tilapia in addition to vegetables. And she already teaches cooking and preserving classes, including how to can beef and chicken.

“My dream is that the teaching school and farm will be able to supply nearly 150,000 pounds of fish protein and fresh vegetables to our community soup kitchens and pantries,” says Rachelle, who gives you no reason to doubt her ambitious long-term goal.

Then there’s The Veggie Bus. By the fall, the hope is to get the 1970s-era Volkswagen van running; bought in less than pristine condition, the van still needs mechanical work and a paint job.

“I want to be able to load up The Veggie Bus with produce and drive it all over Marion County,” says Rachelle, whose husband George is her biggest supporter. “The Veggie Bus will be an educational traveling farmers market.”

Lest you think that Rachelle will rest once all of her goals are accomplished, think again.

“My goal is to put a garden in every possible spot and be able to grow so much food that there’s more than enough to feed everyone in Marion County,” says Rachelle, adding, “and then we’ll keep going and share our harvest with all our neighbors outside the county. I believe that we can do this.”

Seed by seed, garden by garden.

Cool season veggies can be replanted as needed throughout the winter. Planting in intervals helps extend your growing season and doesn’t overwhelm you with too many veggies at once!

Plug in a bug zapper near your garden to help eliminate moths at night. Fewer moths mean fewer eggs and fewer caterpillars to eat your garden!

Fall Harvest What To Plant When