Meet the Ocala horse farm owner and CEO behind a company headquartered in Marion County that is researching a possible treatment for COVID-19, whose own family is on the front lines of the epidemic. 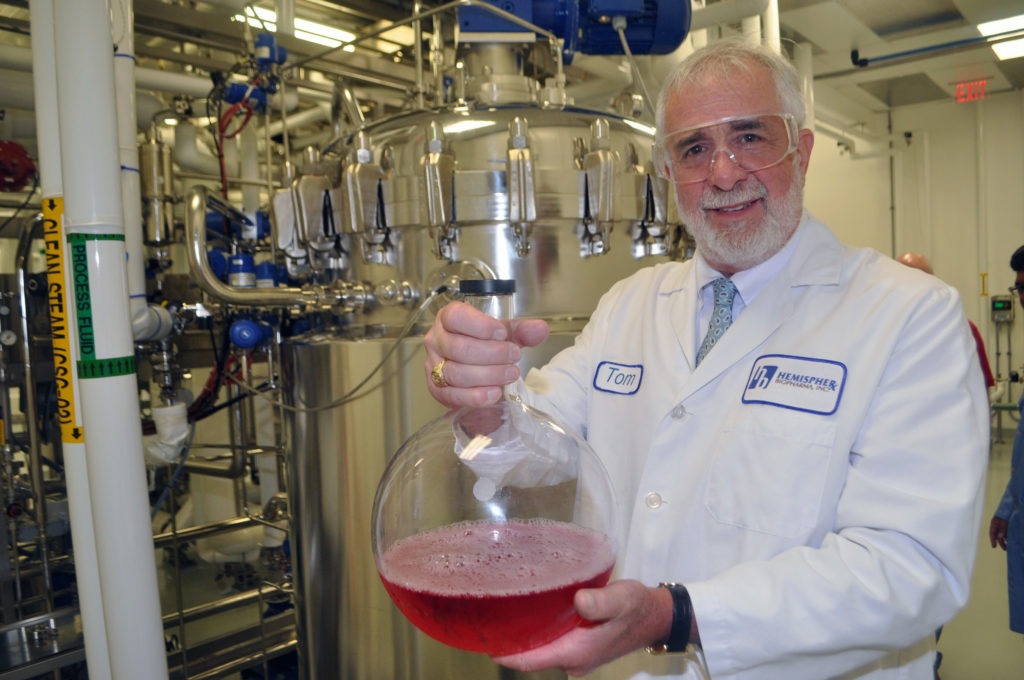 For Thomas Equels, an investment in a biopharmaceutical firm more than a dozen years ago has led to a new career and, possibly, a new tool to protect his family members, and others, in the fight against the COVID-19 coronavirus.

In 2008, Equels, whose background includes serving as a helicopter pilot during the Vietnam War, raising Paso Fino horses and working as an attorney, became a major stockholder and was asked to join the board of directors of AIM (Amplified Immune Modulation) Immuno Tech. Eight years later, he was named chief executive officer.

AIM Immuno Tech is currently focusing on the effectiveness of their immune system enhancing drug, Ampligen, which “has potential as a prophylaxis for first responders and other medical professionals, and early-onset therapeutic and vaccine enhancer for a broad spectrum COVID-19 vaccine,” Equels explains.

“Several years ago, I studied Ampligen very carefully and became a true believer in its potential,” Equels asserts. “I believe I play an important part in unlocking that potential. If successful, we can create a better life for people all around the world.

“My family is on the frontline of this battle against COVID-19,” Equels adds, revealing his “personal interest” for finding an effective drug to combat the virus. His daughter is a nurse, his son is a doctor,

one family member is a police officer and three are firefighters and EMTs.

Equels conducts the business of AIM Immuno Tech, which he calls a “David” dealing with “Goliath” pharmaceutical companies, from the corporate office in southwest Marion County. The corporation also has a 30,000-square-foot production facility in New Brunswick, New Jersey.

In mid-May, FDA authorization was given to begin clinical trials.

“I have a sense of destiny,” he offers. “If I find something to make this a better world, I become committed to completing it.”

Equels, 68, was born in Beaver, Pennsylvania. Six weeks later, his family moved to Key West, when his father was transferred there with the U.S. Navy. They returned to Pennsylvania about four years later.

His interest in becoming a lawyer was piqued when, in junior high school, at his mother’s request, he would go to the courthouse in Beaver to walk with a family friend, Mr. Kovacic, who was blind, on his way home.

“The chief judge would let me in the law library,” he recalls, “and judges would let me sit in on closing arguments.”

The family moved to Titusville, Florida when he was 13.

He enlisted in the Army at age 17, and after later graduating high school, he attended flight school and flew Cobra attack helicopters in the Vietnam War from January 1972 to January 1973. He twice was awarded the Distinguished Flying Cross for his actions under combat conditions, once for his part in rescuing about 30 trapped Marines and CIA personnel, and also when his craft destroyed some enemy tanks.

At 20, he was struck by shrapnel and awarded a Purple Heart for his wounds.

One of his earliest pro bono cases involved gaining access for religious leaders and lawyers to Haitian immigrants held in a camp in Dade County. As counsel, he wrote to President Ronald Reagan; the case was eventually settled and access was allowed.

He also handled litigation against slum lords in Miami as counsel for the Southern Christian Leadership Conference (SCLC). An award in his office from the SCLC of Miami in 1984 cites his “outstanding contribution to the Housing and Human Rights Program.”

Equels worked with the Greenberg, Traurig and Askew law firm in the 1980s and in 1990 established the Equels Law Firm, operating in Miami and Orlando. He was the lead attorney when the firm won a judgment in what a November 2008 Orlando Sentinel article called “one of the biggest insurance fraud cases in Florida history.”

Equels was recognized by the Daily Business Review for his work in the Bear Stearns case with a 2008 Most Effective Lawyer Award. He received a similar award in 2008, from the review, for his work in an appellate case heard at the Florida Supreme Court on patients’ constitutional rights to review doctors’ past history and information archives at hospitals.

“I started my adult life as a fledgling pilot fighting in daily combat in a war. I learned in combat to fight to win. I was 19, and admittedly not the best of pilots, when I showed up for combat in Vietnam,” he remarks. “However, because lives were on the line, including my own, I studied to master my craft as a combat aviator, to be the best I could be. We won many battles and I survived with but a few injuries. In such victories, you have the great satisfaction of being alive, but in all fairness there is a certain joy in in winning. As I moved into legal victories as a trial lawyer, involving important social justice matters, the satisfaction of making the world a better place and the joy of winning sustained me Victory is victory! It almost always tastes sweet.”

For his work with the poor and for contributing his religious paintings of Christ and other biblical figures to churches throughout the Diocese of Orlando, Equels was named a Knight of the Papal Order of Saint Gregory the Great. He also has donated his artwork, depicting the ultimate sacrifice of veterans, to The Villages VA Clinic.

Laura Fabar Equels, who calls her husband a true “Renaissance man,” currently serves as president of the law firm. An endowment at FSU is named the Equels/Fabar Endowment for Social Justice.

The couple raise Paso Fino horses and he is an award-winning dressage rider. In the mid-1990s, they established the Equels Racing and Training Center, where Structor, the Breeders’ Cup 2019 Juvenile Turf Champion, began his training.

Equels still enjoys being a pilot and riding his motorcycle.

“I ride my motorcycle through the Ocala National Forest, not a car in sight,” he explains. “I fly around just for the joy of flying in a small Cessna, often being the only plane in the air. I ride my horse for hours on the Cross-Florida Greenway, on trails draped in the forest’s royal splendor. In Ocala, if one takes advantage of all there is to offer, life itself is a hobby providing endless enjoyment.”

Peter Rodino, chief operating officer and general counsel with AIM Immuno Tech, has worked with Equels for 10 years and calls him an “inspiration.”

“Tom is not only driven, he has integrity and the goods to back it up,” he offers. “We have a small staff of about 30 and it’s a team process. He has compassion for people and really wants to do something significant to help, especially now.”

“Since I was young, I have lived my life without fear of failure,” Equels affirms. “I am a husband, a father, an artist, a pilot, a lawyer, an immunology researcher, a Christian—each of those things involves the potential for failure, but each is also the opportunity for success, and success is often the child of failure. We learn from our mistakes, and I have made many. But I do not stop trying, striving to be the best me I can be. By analogy, I look at life like a river, ever flowing to the ocean, and with each day, life’s scenery goes drifting by never to be seen again. I try to savor every moment of this ride we call life without fear. Why? Because the river does not fear losing itself in the ocean, but rather the river exalts in becoming one with the ocean.”