Jeanne Crabtree’s transition from anesthetist to the Heirloom Lady developed much like her projects—piece by piece.

Her mother, who made clothes, drapes, and furniture coverings herself, taught Jeanne how to sew at eight years of age.

The Villages resident’s dream would have to wait. For more than 20 years, Jeanne worked as an anesthetist. She retired in 2000.

Still, she never forgot about heirloom sewing, a needlework technique based on the 1890-1920 period of French hand sewing.

Children’s clothes, particularly christening gowns, are the most common pieces made, but some heirloom sewers make wedding gowns. One of the requirements of an heirloom piece is top-notch material, such as quality fabrics, shell buttons, lace, and silk ribbons.

“There are no synthetic fabrics in heirloom sewing,” Jeanne explains. She’s quick to add that a person can use lesser quality materials, as in children’s play clothes for example, but “they just don’t have that long-life expectancy that something made from silk, 100 percent cotton, linen, wool—all those natural fibers—does.”

Her work at Duke University in North Carolina brought her in contact with other people in the Raleigh area who were interested in heirloom sewing.

“At Duke, there was a lot of heirloom sewing going on,” she says, “but because of my crazy work schedule, I could never get into the classes.”

Jeanne says the turning point came when she and her husband Robert got married. The two had been high school sweethearts in their North Carolina hometown.

By the time they met again, he was a widower and she was divorced.

“Just out the blue, he called me up about five years ago,” she says. “Robert and I got married, my daughter had a baby, and I started making baby things and that kind of rekindled the ‘Gosh, you know, I really want to get into this heirloom stuff again.’”

To start on her new path, Jeanne enrolled in the Martha Pullen School of Art Fashion in Huntsville, Alabama.

Teacher and TV host Martha Pullen says on her Web site that she “didn’t invent heirloom sewing…  but she and her fabulous staff can take much of the credit for turning this age-old art into a popular hobby.”

Jeanne says that the course taught her the basics of heirloom sewing, including what it was in the past and what it is today. 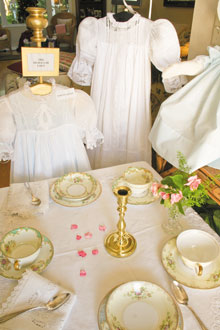 Jeanne does use a machine, but “some of the work just has to be done by hand,” she adds.

Jeanne is now turning her hobby into a business.

“My goal is to do made-to-order work, particularly the christening gowns, the dedication gowns, and the high-end stuff.”

A christening gown done very simply and elegantly costs around $200. The price is determined by the amount of work, embellishments, and, of course, the materials, which do not come cheap.

Though the cost is high, Jeanne says that a finished piece will have the quality to last several generations. Sure, a store-bought christening gown, for example, might be cheaper, but it will most likely be generic and made overseas.

The same cannot be said for Jeanne’s work. She says she will embroider whatever the parents want: birthdate, christening date, or even the parents’ names.

“When that christening gown is passed on to their family, it’s right there,” she says. “One hundred years from now, someone can say, ‘Oh, this was little so-and-so’s.’”

Jeanne also passes on her skills through teaching. About a year ago, she met fellow heirloom sewer and business owner Yely (pronounced Jelly) Collazo who owns stores in Tavares and Oxford.

Jeanne says Yely’s Sewing Room in Oxford can accommodate about six students. She teaches heirloom sewing and also displays some of her own work there.

“We have about four, five, or six pieces [of Jeanne’s work] on display,” Yely says.

When asked which is her favorite, Yely replies, “I think all.”

As for Jeanne’s favorite creation, it’s one that she has already given away: a party dress for her granddaughter.

Her favorite thing to design may be the christening gowns, but she enjoys fancy party dresses, embroidered jumpers, and smocking, as well.

One thing she always has to look out for, though, is silk. The Heirloom Lady is allergic.

“Weird,” she says. “I can briefly pick it up and hold it, but if I have to work with it a lot, I have to wear gloves. And if I’m going to be holding it on my lap, I have to have something over my lap.”

Still, she enjoys what she does and is happy where she ended up.

“This is a fantastic area in that there are lots of proud grandmas here,” she says. “I think my biggest hurdle is to get my product out there and let people see it. Because, I think that when they see it, it will sell itself.”

Even if it doesn’t, she remains optimistic.

“This is something I’m doing for fun,” she says. “It’s not anything that I have to depend on for an income, so we’ll see what happens.”